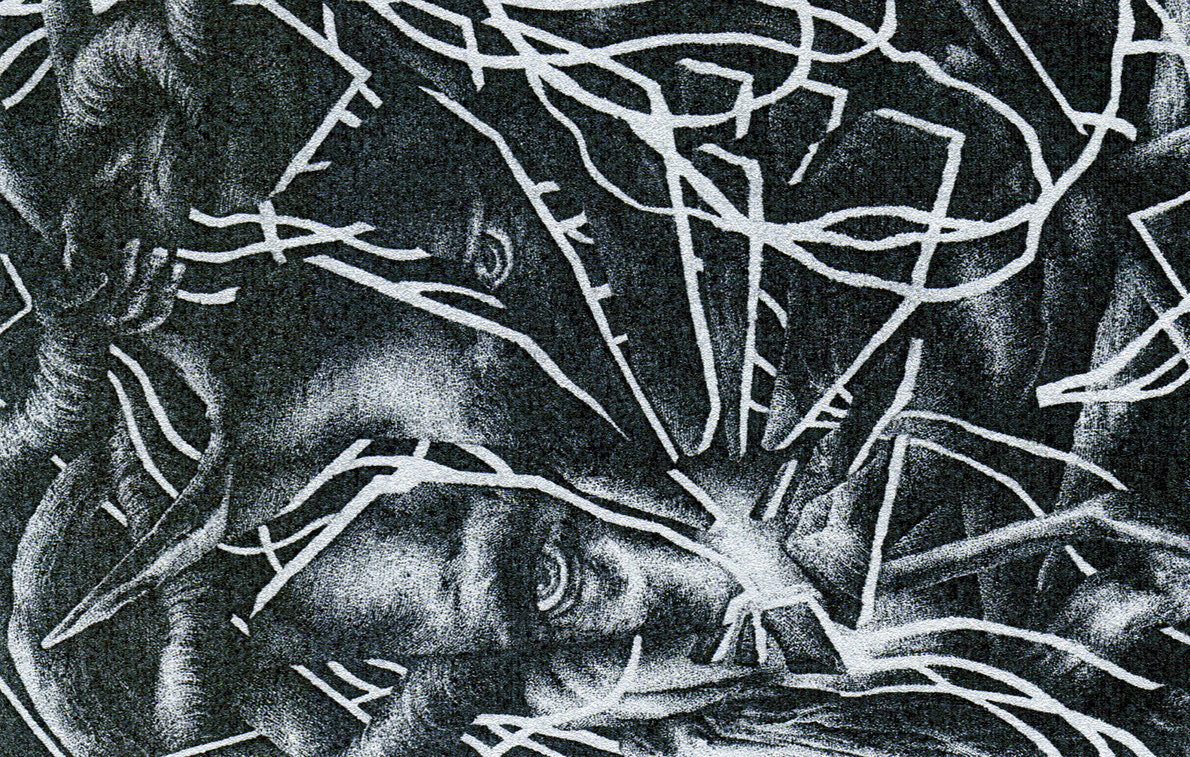 WTF… let’s say it one more time, WTF! ZOUS‘s new album No Ground To Give is totally John Blaze!!! I fucking love the thick, disgusting riffs that put a battery in my back to say FUCK AUTHORITY! Taylor (with help from some radical friends) has something to say! Not only do I hear him, but I totally feel where he is coming from. His vocal delivery on No Ground To Give is putrid, but also it’s straight to the point! ZOUS’s songs have these insanely awesome pits of chaotic empathy that separate them from the pact! When y’all blast the song “Pray A Lie,” I’m sure y’all will become a fan instantly.

ZOUS is not a death metal band that’s posturing for some metal fantasy land, this shit is about real life. I say this because the Anti-Racist energy of Hardcore is alive and kicking ass in all of ZOUS anthems of filth! Yo Taylor, if you peep this, I want to say thank you for creating one of my favorite Death Metal records of the past decade. I also want to say good looking out for taking a stand against white supremacy and overstanding that we all have to FIGHT BACK together!

If you could put three of your songs from The Blazing Sun, A Fiery Dawn into a time capsule to be opened in 2060, what songs would you put in there, and why?

The Law, Hung At Dawn, Sangre.

What was the moment when y’all knew that SLOWBLEED was going to be a band? Why the name SLOWBLEED?

Well, Slowbleed was a project we recorded in our guitar player Logan’s room, years before we were a band and I remember us arguing endlessly about the name but somehow that one just stuck. Read our full SLOWBLEED interview HERE.

New Zealand’s Exaltation has been burrowing into the hidden substrate of total sonic annihilation for a long, obscure five years. The Auckland band has taken this time span to hammer away at their first official full-length offering “Under Blind Reasoning” after their debut demo tape saw the light back in 2017, and oh lord what a rewarding wait this has been. With its thirty minutes for eight tracks of complete death metal domination, Exaltation has pushed itself up to the highest ranks of elite death metal and unleashed one of the most devastating and intimidating works the genre will see all year.

So, someone, I respect turned me on to GRAVE AXIS. Now it’s my turn to turn y’all on to this killer band. Unholy fuck they have put out one of the sickest Death Metal records of 2022. You know the drill it’s time for you to get with the program!

This is what I love about CVLT Nation! The fact that I get to turn y’all on to killer new bands like Cruentation. Their self-titled debut IS OUT OF THIS FUCKED UP’ED WORLD! Every second of this album bleeds agony and audio despair. I can’t get enough of Cruentation they RULE! A message to the band: please keep up the insanely awesome work we are listening!!!

WTF WTF WTF!!! The new album from Vacuous Depths is filthy like a 10,000-foot pile of human fecal matter. Every riff has been dipped in the blood of the corrupt and will suffocate them in their own hate. This band creates the kind of Death Metal that will have the undead dancing on the graves of the KKK. Vacuous Depths don’t make songs they manifest dark chambers of sonic torment where only night terrors exist! They spit in the faces of our downpressors and give me the energy I need to take a major stand against those that want to do me harm. Sonically, their new album Corporal Humiliation is a huge middle finger to all of the posers who are not willing to headbang for our right to FIGHT! There is not one weak moment on this record and maybe that’s why I’ve got it on repeat!

HELL FUCKINNG Yes, Vacuous Dreams of Dysphoria is all that and then some! This UK DEATH METAL is so fucking AWESOME!!! Their songs are sonic plagues that eat away at all of your Fucked UP thoughts leaving putrified happy thoughts. There is nothing I don’t like about this band! I’m so happy that a new Vacuous record came out this year.

#3 GRAVE INFESTATION Persecution of the Living

There’s broootal and then there’s Brutal, and if you’ve listened to Death Metal long enough, you know the difference. The former is fun and sort of sleazy, while the latter is stone-cold murder on a plastic slab, the kind drenched in suffocating pain and misery. Vancouver four-piece Grave Infestation tends to the latter description, although they flirt with the former just enough to keep things from careening into a corner so black and dark that there is no hope. This band does not mess around, and when it comes to the Death in Death Metal, they definitely skew towards the early days, Morbid Angel coming most to mind here. They released a couple of demos that got the underground all hot and bothered and now they have finally released their first, official full-length, Persecution of the Living. And here, they have brought to the world a glorious concoction of old school with a smidgeon of Swedish and new school. Written By Kelly Hudson Read the full review HERE.

So SICK, So Gnarly, So Insanely AWESOME, and just some of the words that come to mind as I blast the new ACEPHALIX album Theothanatology out now on 20Buckspin. I never thought I could be more of a fan of this band, but then I heard this collection of songs! From the very first moment y’all hear the title track, you’ll be able to hear that they firing from a level that most bands don’t ever reach. As a unit, ACEPHALIX is made of musicians that have loads of respect for each other as peers and as human beings. This fact translates into them manifesting a record that is full of unhinged passion and finds all of them being honest in their creative skin. This is evident when you hear a song like “Innards of Divinity” which is a total beast but has these interesting vocal passages that sound killer! I can’t front, this band smashes out some of the most brutal Death Metal and still never loses a beat when it comes to injecting their songs with feral melodic power that makes me addicted to what they do. Read the full review HERE.

Kill them High, Stab them Low, fuck the Death Metal status quo! DIABOLIC OATH’s Aischrolatreia is a sonic war weapon ready for all-out war. Unholy hell fucking yes this record is a beast that could never be tamed! DIABOLIC OATH creates music that is in a Blackened Universe all of its own! This is the soundtrack to the destruction of all of those on the fence in the metal scene that won’t take a stand against White Supremacy, FUCK OFF AND DIE. While I listen to DIABOLIC OATH and laugh!