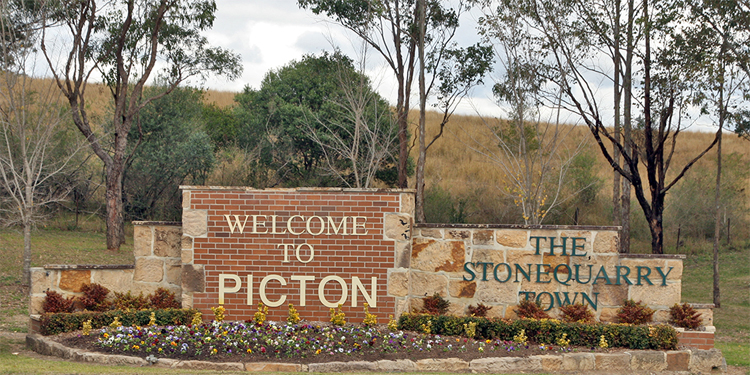 Every town has its ghost stories and haunted spots. Picton is a little different… this town has more apparent haunted areas than anywhere else I’d ever been. I usually seek these places out, but in Picton they are unavoidable. Picton is the most haunted town in Australia. This isn’t a self-proclaimed title either – Picton has earned that title. A ghost story sticks out in almost in every corner of the town. I went there to visit my new girlfriend’s family who still live in the area; this is where she grew up. I wanted to know more, so we went exploring.

Europeans first explored the area in 1798, although legal settlement didn’t occur until 1821. Governor Macquarie authorized the building of the new Great South Road between Sydney and the Southern Highlands in 1819. This opened up the Picton area to new settlers. Further development occurred in 1863 when the railway arrived. The town was originally called “Stonequarry” up until 1841, the town was renamed “Picton” in 1845. Picton became an important stopping point along the Great South Road. This eventually became the Hume Highway. The town was bypassed in 1980. The town of Picton also turned out to be the first town the family on my mother’s side settled into after an Irish convict was sentenced to life in Australia for murder. Stories of Paranormal activity abound in the township of Picton, but the old Picton tunnel built in 1867 – originally known as the Redbank Range Railway tunnel – seems to be the focus of activity. This tunnel was apparently used to store mustard gas spray tanks and ammunition during World War II. It was also used as a mushroom farm, and is still known today as the Mushroom tunnel by locals.

Stories of suicide are linked with the tunnel, and the tragic railway accident of the woman named Emily Bollard appears to be the basis of the haunted reputation of the tunnel. Apparently, when the tunnel was still in use by the railway, Emily had been walking through it and was killed by an oncoming locomotive. It is unclear whether she deliberately committed suicide or if her death was just an unfortunate accident. The apparition of Emily has been seen in the depths of the tunnel. When she appears, it is as a white flowing figure of a woman with no face. From time to time, black shadows or figures have been seen on the walls throughout the tunnel. Some witnesses have reported white lights hovering above people’s heads and figures appearing out of the darkness. Ghostly children have been witnessed and electrical disturbances have occurred to devices in the tunnel. People have also felt sudden drops in temperature.

One story once told to me by a friend details a ghost train that haunts the tunnel. He told me he and his non-believing uncles toured one of the now defunct tours of Picton. When they reached the tunnel, he said suddenly they noticed this light in the distance. The sound of a steam train overwhelmed the tunnel. He said everyone, including the tour guide, screamed “get up against the walls” – remember, this tunnel has been inactive for almost 50 years at this time. He claims he felt the wind on his face as he closed his eyes and the train passed. Local houses surround St Marks Cemetery; during the day, this place is just like any other cemetery. At night, however, many people have reported paranormal sightings. The main one being of Blanche Moon, an 11 year old who died in 1886 and who haunts the yard. Blanche was the daughter of Henry and Fanny Moon – her father was thought to have been the timber worker who may have helped make the railway sleepers she fell off of while playing with the other children, the fall which lead to her death.

In January 2010, a family visiting St Mark’s Cemetery in Picton snapped a photo apparently showing the ghosts of two children who died almost 60 years apart. The photo appeared in major newspapers across the country. The children were believed to be Blanche Moon and David Shaw, the son of a minister who died in 1946 from polio. The family claim that there were no children in the cemetery at the time the photo was taken, and that the figures of the two were only noticed when the pictures were downloaded to a computer. Other places in Picton rumored to be haunted are:

Razorback Inn: The Inn is the subject of many spooky stories and the home of a very noisy ghost.

Imperial Hotel: Many staff report the feeling of someone following them through several parts of the building. At times, the jukebox begins to play even though it was not connected to power.

Wendover House: Built in 1880 by John Wright McQuiggin. A former resident claims to have been visited several times by the ghost of McQuiggan, whom he recognized from an old photograph.

Maternity Hospital: The sound of crying babies and the ghost of an unpleasant matron have been seen by residents; others claim to have been woken up in the middle of the night by invisible hands wrapped around their throats.

Wollondilly Shire Hall: The hall is reported to be haunted by three ghosts – a bearded man wearing a hat and suit, a small mischievous boy, and a little girl, who is most often heard rather than seen.

Stonequarry Viaduct: Over the years, many people have drowned in the creek. Locals have heard ghoulish sounds of people swimming and splashing in the creek.

Emmett Cottages: The ghost of a woman is seen in the window of the building, and shop owners often find their displays have been moved overnight.

Queen Victoria Hospital (Old building): Buzzers are still going off, even though they have been disconnected for years. Any nurse who has worked in that building has a story, from children crying and singing, to shadowy figures, footsteps, and extreme cold sickening feelings in certain sections.

For more about Picton’s hauntings, see below: