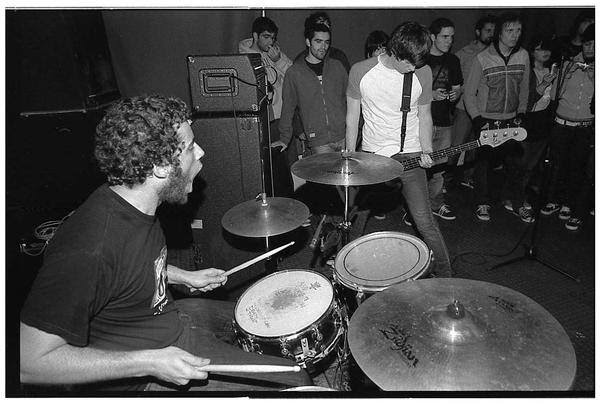 If you’ve never heard of X-acto, the hardcore band from Portugal, I guarantee that you are definitely missing out. Or at least were, at the time. Not only because they were good, but also because – to a lot of kids at the time – they were legendary. In fact, they were probably guilty of spawning a whole generation of hardcore kids in Portugal. That’s also the opinion of João Vairinhos, 50% of Regulator Records, since he accuses them of inspiring him to do a lot of the things he has done after going to their shows. It was all because he wanted to put out something by the band that descended from X-acto, which was called Sannyasin. And not only did he succeed, but he also edited them, along with his friend Ricardo Remédio, on a split cd with Zootic, which was like the Portuguese answer to all that Ebullition records stuff. Not that they sound like those bands, but their universes had some things in common, plus they also had the great idea of singing in Portuguese.

Regulator records is not your typical hardcore bands-only type of label – far from it. In fact, they couldn’t care less about having a concept or some artsy-fartsy shit like that, and you can tell it by listening to the stuff they put out. If you consider that Systemik Viølence sounds like the product of a Big Bang between punk and metal, while label owner Ricardo Remédio’ own record could easily be the soundtrack to the next Carpenter movie shot at hell’s gate – that is easily confirmed. At the same time, “Morte por mil cortes,” which translates into something like “death by a thousand cuts,” might be the soundtrack to your hanging and João’s own band The Youths, playing something like early 80s type of punk-rock with a lot of spunk and style. So the key here is that João and Ricardo have to empathize with bands members, and, well, with the bands themselves. It makes no difference if it’s depressive black metal or skramz, as long as it’s not ska, reggae or techno, because that shit won’t fly by João’s own admission.

The thing is, these guys have to be somewhat out of their minds to put up a record label in the country that is exactly located in the ass of Europe and where not a lot of people actually buy music. But like João puts it, he couldn’t care less if people are buying the physical format, because he and Ricardo both grew up with cassettes, CD’s and vinyl records and it all just feels handicapped with online editions only. All that emotional connection makes perfect sense when you hear him explaining that one of his cousins got him a tape with Sepultura’s Morbid Visions on one side and Slapshot Live at SO36 on the other, and that kind of triggered everything from then on. That’s a perfect way to lose virginity to both metal and punk, and growing up in the early 90s it really didn’t made all that difference if bands were more punk or metal oriented, because usually they had something to say either way and what the hell, what matters is enjoying it loud and fast. Or loud and heavy. Or both. That also makes things clear as to why João played drums in both punk and metal bands, as well as other styles. He never was a one-trick pony, musically speaking. Just listen to his band Löbo and see for yourself.

This just makes it even harder to find the time for everything he does, besides running the label. I mean, this guy plays in Löbo and The Youths and with so many friends’ bands that he probably can’t even remember them all. For a country as small as Portugal, these guys sure know how to pick the bands, and even if the aesthetic of it all is apparently not that similar, there seems to be the same kind of feeling going through everything from the metalcore of Don’t Disturb My Circles, the post-industrial contention of Rancor, the anarchist neo-crust of Sistemik Viølence or Juseph’s metal-beyond-metal. Since João and Ricardo are definitely not after the big bucks, I guess this is what you would call music by the kids for the kids, even if most of us are not kids anymore and this is not old school hardcore, it’s the feeling that matters. And there’s plenty of that going around here.