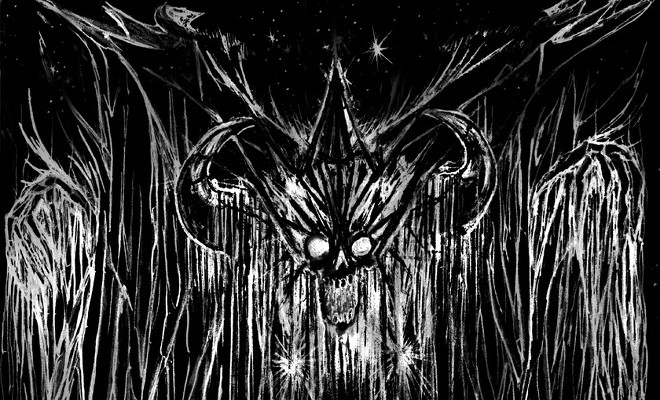 Let me pick my heart up from off the floor. It is scattered all over the room, because I just finished listening to GLOAM‘s new EP Vanquished, and the damn thing plunged me into a misery so grand that my heart literally atrophied, crumbled and poured out of my ribcage like slime. When you hear this EP, you will touch the void and you will know without a shadow of a doubt in your mind what complete fucking loss and misery sound like. You will feel sadness coming to life, growing claws and driving them into your neck in a lethal and inescapable grasp.

Gloam hail from sunny Santa Cruz, but there is no light whatsofuckingever in their music. Instead, this fantastic band crafts a mysterious and completely desolate and barren form of doom-ridden black metal that winds and coalesces in massive dirges of inconsolable ruin and dismay. The guitars sound like piercing and slicing striations of lurid sadness. The riffs are literally death-ridden, and they painfully slither like worms, winding to the sky in spiraling constructions of dismal depressive black metal and soul-disintegrating doom. The tempos are almost always set on a comatose mid-to-slow pace, but the blast beats and tremolo picking create a hysteric miasma of terror in these dirges of desolation.

The vocals are at times half-screamed and half-chanted, and sound like the suffering howls of souls left to starve in an abyss of eternal torment. I can’t even describe how beautiful and tormenting this band’s music is. It has a solemnity and grandeur that is hard to describe, but at times the music also becomes so emaciated, corroded and consumed by decay that it’s really hard to explain how on earth it remains so proud and regal in it’s hideous and ruinous aesthetic. If you are a fan of the most depressed shit on earth – Xasthur, Leviathan, Trist, Striborg and the such, but also appreciate the epic, dirgy and wandering greatness of bands like Weakling, Wolves in the Throne Room, Evoken, Velnias, Ash Borer, Agalloch,  and the such, then this shit is definitely for you. This band is simply superb and on a path to greatness that we have no doubt in our minds, will be with no return. Limited tape out now on Eternal Warfare and Wretched Records – time to die!