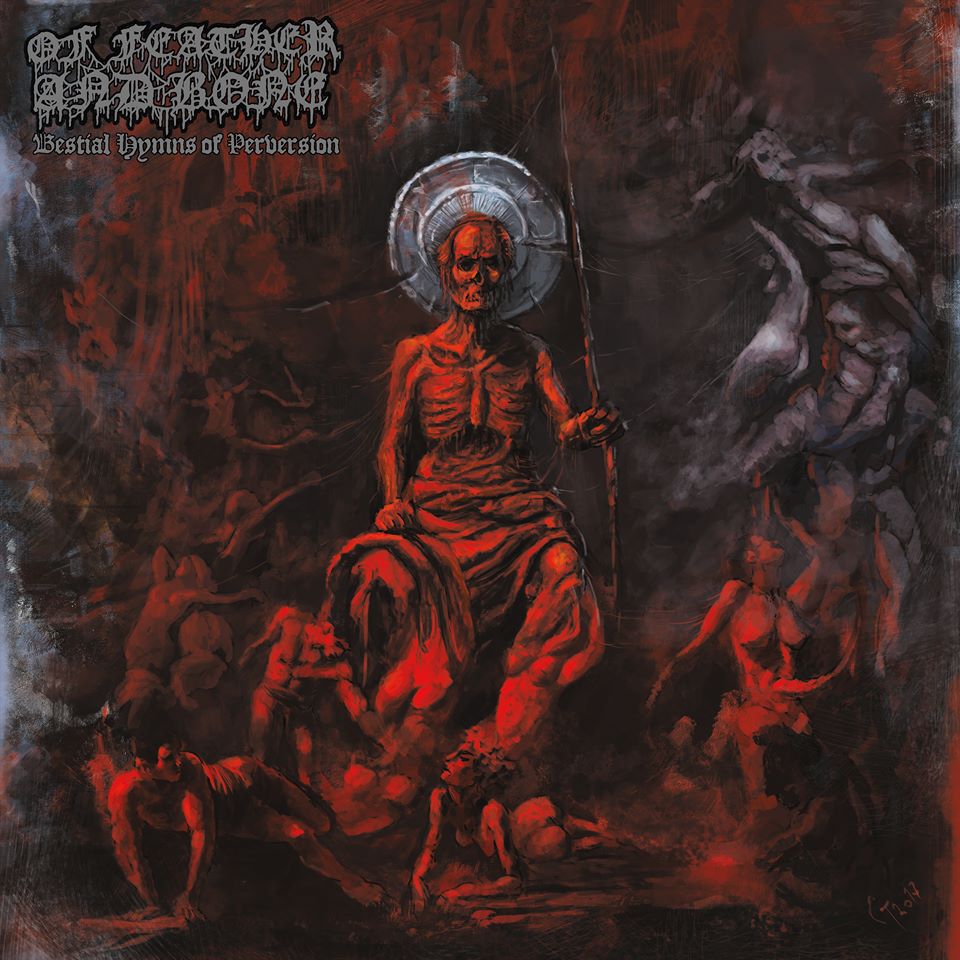 I’m going to wax affectionate here for a second; Of Feather and Bone is fucking amazing. Nary a release of theirs has passed my desk that I’ve not beaten to death with repeat listens. Their previous material straddled and blurred the lines between grindcore, crust and death metal, with only the heaviest flavors of hardcore peppered throughout. From the barbed hardcore found on their debut Adorned in Decay EP to the unhinged grindcore on their first album Embrace the Wretched Flesh, this Denver trio has pushed themselves to monstrous new limits with each release.

Their 2016 promotional demo contained two songs that saw their sound evolve further as they shed their more human effects in favor of a natural, mammalian form. Gone were the hardcore breaks, supplanted by thunderous blasts issued without pause by drummer Preston Weippert. Dave Grant’s guitars became awash in darkness, possessed of a purifying grime that seeped into every second. The vocals, bellowed with sinister allure by Alvino Salcedo, crept from beneath the murk, while his bass stabbed murderously through the shadows. The new, pure death metal sound was startling, but it was easily my favorite material Of Feather and Bone had released to that point. Now, a year and some change later, we are gifted with a whole fuckin album of these carnivorous confections.

Bestial Hymns of Perversion is every bit an animal as its title suggests. The two tracks found on the preceding promo, “Resounding from the Depths” and “Pious Abnormality,” are given haunting, revitalized life amid the five new tracks. “Repulsive Obscurity” opens with a chorus of feedback, carrion flies and ghostly snarl before breaking into neck-snapping speeds, with all hellacious cylinders firing at max. There’s myriad qualities that make Bestial Hymns exemplary, chief among them being the batshit insane speed they manage over the album’s 30 minutes. It is breathless, with each member moving with such urgent cohesion you can tell much craft and affection was implemented into the songwriting. “Lust for Torment” tears through a pair of distanced snare hits like a chainsaw through flesh, pausing only to allow the guitar to dole out its own dissonant wrath before each comes together for a climactic feeding frenzy.

“Pious Abnormality” was my favorite of the two promo tracks, a status it retains in its polished, re-recorded glory. It is among the finest pieces Of Feather and Bone has ever bestowed, a violent delicacy of hardcore breaks and surging malice. The titular “Hymn of Perversion” is a towering onslaught, where everything this triad can muster is fused into one calamitous whole. The vocals roar with horrifying anguish, quaking even the drums’ heart attack flutter. The guitar churns out its serrated madness at a fluctuating cadence, relenting only to self-sharpen on its own cutting, calculated riffs.

“Hymn of Perversion” is the best example one can lift from the album at large of the zero fluff death metal Of Feather and Bone has created here. The horror-themed theatrics are present on all accounts, but not played out for the sake of shock value, rather as compliment to the greater work. The lyrical hatred for all things human and human-made is palpable throughout, the sound itself inviting only those who share its misanthropic sentiment. Its seven tracks are rife with all this death metal purity, but not oversaturated by it, numbering Bestial Hymns of Perversion among the most concise and vicious albums from the genre in the last decade. Advertisement. Scroll to continue reading.
In this article:Bestial Hymns of Perversion, of feather and bone, profound lore records