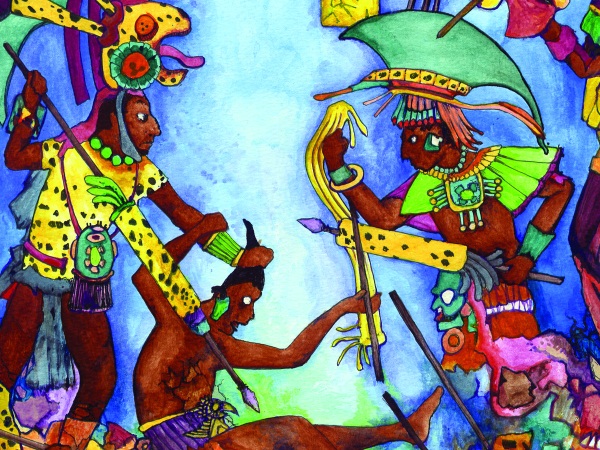 The comings and goings of the somewhat mysterious Black Twilight Circle may be shrouded in shadow, yet the collective creative output of Crepusculo Negro records shines as brightly as the California sun in which its originators bask. Ideologies and intentions aside, the circle have put out some storming releases since the label’s inception six years ago, not least due to the talents and efforts of BTC ambassador Eduardo ‘Volahn’ Ramírez. Volahn’s self-titled project is certainly one of the preeminent facets of the label’s roster, with 2008’s Dimensiónes del Trance Kósmico setting the standard for the caustic cosmic chaos that now surrounds the collective.

Far flung from the grim and frostbitten kingdoms of Scandinavia, California’s sun-kissed landscapes offer an entirely different breath of inspiration, and this in turn forms a part of what makes Volahn’s music so strikingly superlative. As excruciating as it is to listen to something that sounds like it was recorded inside a vacuum cleaner, black metal fans probably won’t be too put off, and honestly, acclimatisation works wonders here. There’s a lot to digest amidst Aq’Ab’Al’s turbulent existence, but if one constant prevails, it’s the frenzied barrage of raw black metal fury and intense guitar melody, meticulously crafted through Volahn’s skilled instrumentation.

Serious concentration is required at first in order to pick up the melodies (not to mention the drumming) that are obscured by the lo-fi production (although the songs available via bandcamp appear to be of superior quality) but once these elements materialise, the strength of songwriting and musicianship becomes strikingly clear. An hour-long journey into some violently vitriolic black metal, Aq’Ab’Al finds itself reverent and inquisitive rather than menacing, with a deeply intriguing quality to the melodies that could almost be medieval in style if Volahn’s passion for his heritage and indigenous culture wasn’t so well documented. The majority of the longer compositions end with moments of subdued serenity, fueled by strong cultural influences and native traditions that revolve around Volahn’s ancestors and the Nahuatl language. When not enveloping itself in such introspection, the album is perpetually uncompromising, maintaining a keen sense of striking melody whilst simultaneously splitting your head in two with unabashed black metal savagery. Despite the Black Twilight Circle’s nebulous existence (and indeed reputation), there’s something about Volahn’s music that’s just downright enjoyable. This can be attributed to a coalescence of many aspects of the music; the pugnaciousness and penetrating harshness, the cleverly forged melody, and the considerable inspiration taken from his surroundings and from his Aztec ancestry. Clearly this formula is one that works fantastically well, producing a sound that is both vitriolic and full of intrigue, the addition of exceptional musicianship and songwriting cementing Aq’Ab’Al as one of the key black metal releases of the year.