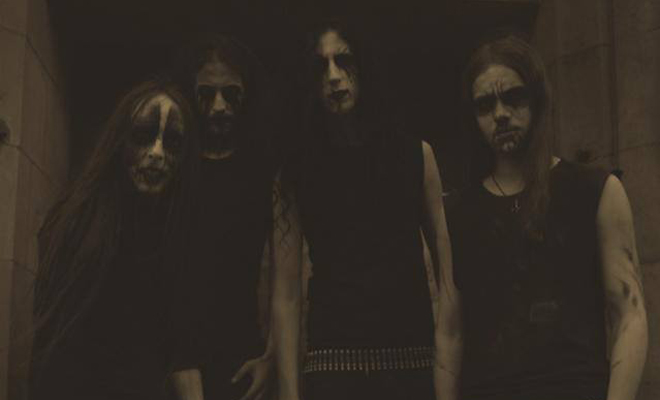 UK black metal has always been seen as some kind of lesser son to that of its Norwegian counterparts, through no fault of the makers of course, but when the one name to touch upon is Cradle of Filth then most new bands have to go a long to prove their worth within a scene that is both small and very closed off. Luckily there’s a new breed of British black metal – bands that plant their feet firmly in the raw, cold expanses of a truer sound and those that tread a Cascadian path while bringing a little traditional flavour to proceedings. The Infernal Sea, Winterfylleth, Wodensthrone and Soar are examples of some incredible black metal coming out of these fair isles of late and Verdelet are a name to add to a steadily expanding list of groups that are giving UKBM a good name. Verdelet’s sound is definitely rooted in the days of old with cold, harsh landscapes of sound filling the space of Lights Of The Old World while Morior’s vocals bite and snarl at the heels of the severe guitar (Balan) riffs and blasting drum work (Vadok). Verdelet are still a little rough around the edges but with this particular style of black metal, that isn’t so much a problem but a bonus. The raw lines are drawn under “Bring Out Your Dead” which travels the plains of cold, icy lands while the band bring a sweet groove to the song in the swaying guitar lines allowing the movement to flow into “Terminal Decay” and the wonderfully rhythmic progression it then follows.

“Blackened Bones” takes a different path with a gorgeous, melodious and melancholy introduction which steps back to sit beneath the otherwise aggressive vocal approach. The play off is disarming considering how combative the music has been up to this point but it shows that Verdelet are far from a one-trick black metal pony. The beauty is masked and full of sadness but it’s wonderful and dark, as often is found in the more esoteric strains of music.

Lights Of The Old World may hark back to a different time but Verdelet are a band to keep in mind for the future. You can hear Lights Of The Old World via Terrorizer and buy the EP from the band here (although give ’em a while to get it out you due to the physical version selling out).