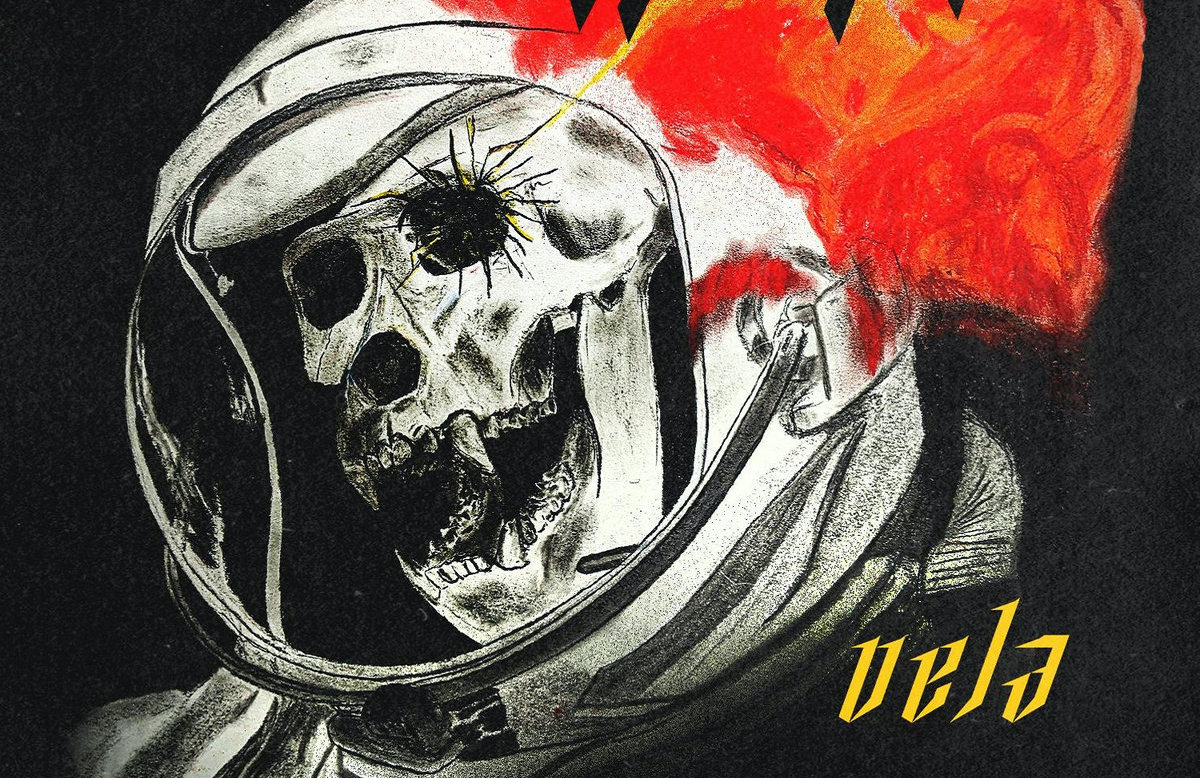 A wintry forest might be black metal’s home base when it comes to its inherent mysticism, but some believe that outer space might be the genre’s final frontier. And it is hard to argue against that idea. This is where the boundary between nature and an infinite black void gets blurry. Based on their recently released debut Vela, we can count Indianapolis-based four-piece Blasted Heath as the latest crew to hurl themselves into the stellar abyss.

From the beginning, it’s clear that Blasted Heath is out for blood. Their sound mixes early Bathory, Darkthrone, and the blackened thrash of Aura Noir in equal measure. Opener “Big Chill” rips with gnarly thrash and raspy vocals but when a guitar solo appears it shows these guys are not at all one-dimensional. The solo oozes metal but is colored around the edges with psychedelic overtones. “Ape” follows suit and mixes more vicious Bathory-inspired metal with haunting arpeggios.

Things take an interesting turn with “Europa”. The first half slows the pace but is still quite brutal. The guitar once again provides a couple of prominent solos, but now the noise and weirdness are turned up a notch. Perhaps “Ape” represented the discovery of the obelisk by humanity’s distant ancestors per “2001:A Space Odyssey” which would make “Europa” representative of liftoff into space. “Dark Energy” continues at a more measured pace and almost sounds like someone snuck Quorthon into a Neurosis recording session or vice versa.

The final trio of songs are thematically linked and find Blasted Heath really coming into their own. “Neutron Star” literally starts with a sound recorded from the Vela pulsar. From there, the song winds through an epic journey that simultaneously evokes old-school black metal and epic post-metal landscapes. The song culminates in a metal-psychedelic mash-up that brings to mind Voivod’s cover of “Astronomy Domine”, quickly followed by a burst of blackened punk madness.

“The Wind in Vela” finds the group stretching out even further. The mostly instrumental track juxtaposes very quiet, clean guitar passages with frostbitten blast beats, all the while a sampled dialogue discussing apocalypse via stellar event plays on underneath. “Strange Matter” then brings the album to its conclusion. The track begins with an epic doom riff before picking the tempo up again. The composition on this song has more twists and turns than the others before it, but it never fails to be anything but enthralling.

For a debut, Vela is quite stunning. Their vision is fully-formed and their execution is top-notch. While the closing trio of songs are awesome and really shows the height of their ambition, the early tracks are equally satisfying for their old-school metal attack. Vela gives us food for thought and vicious, headbanging madness in equal parts. So forget about the dark forest because space is the place.