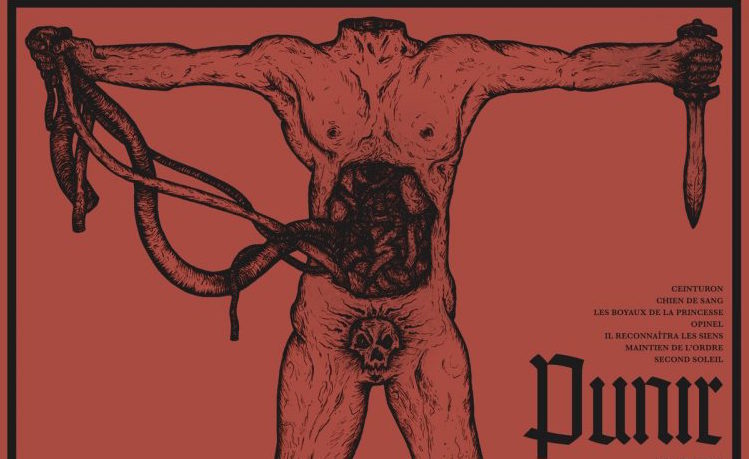 Whatever your personal favorite metallic sub-genre of choice maybe, usually the best bands have a tendency to color outside the lines. This is certainly the case with the French quartet Fange on their latest full-length “Punir”, due out on March 1st on Throatruiner Records.
These bruisers started off their career playing Sludge, and while that’s still the genre that best describes their sonic filth, they’ve added more and more elements to their sound. Album opener “Ceinturon” is a great example of this. Ominous Doom quickly gives way to uptempo Swedish Death Metal worship, all washed over with a layer of noise and decay which is obviously Fange’s calling card. The vocals oscillate between ripping death growls, more mid-range Hardcore screaming and some almost clean chanting. The attack is both immediately visceral but also transcendent. There are moments when the band stops on a dime while the guitar holds a single note that sounds like the spirit being torn away from the flesh and floating off into some blackened hell.

While tracks like the aforementioned “Ceinturon”, “Les Boyaux De La Princesse”, and “Il Reconnaîtra Les Siens” deliver ripping Swedish Death Metal goodness, those songs along with others tend to find their way to the fantastic interaction of Industrial and Sludge in the vein of Skin Chamber, the obscure behemoth Black Sun or Scorn’s “Vae Solis”. Often times the inherent nastiness of the Sludge riffs is amplified by washes of unidentifiable noise that pulses and throbs beneath the surface. At other times, the dynamics drop, such as on “Chien De Sang”, where time slows down and the vocals take on a hypnotic quality adding to an overall sense of menace.
The suspicion of Industrial and Power Electronics influences are reinforced through two shorter tracks that are worked into the album.

“Opinel” brings to mind Bastard Noise jamming with Controlled Bleeding while some digital monster narrates an indecipherable text. “Maintien De L’Odre” mines a similar vein while hinting more at the transgressive madness of classic Whitehouse. When the beat worms it’s way into the track, it sounds like the perfect downtempo track from Hell.
The album closes with “Second Soleil”, a perfect summation of Fange’s current sound. The guitars seem to simultaneously drag the listener through toxic muck and also floating disembodied down a tunnel without a light at the end. This is what dying the worst possible death might feel like. When the vocals stop berating one’s ears, they begin to chant, leading one ever deeper into the abyss. By the end of the track, the noise consumes and the sparse drums adopt a ritualistic feel. We are being led to a funeral without end.
Fange’s sound has always been ugly and traumatizing, but as they mature, they become both a more individualized and more effective tormentor. They debase the listener on multiple levels, physically and emotionally, and most importantly, spiritually. There’s only intensifying levels of darkness on this journey, a third eye opening and seeing only a greater void. If filth is what you seek, look no further.