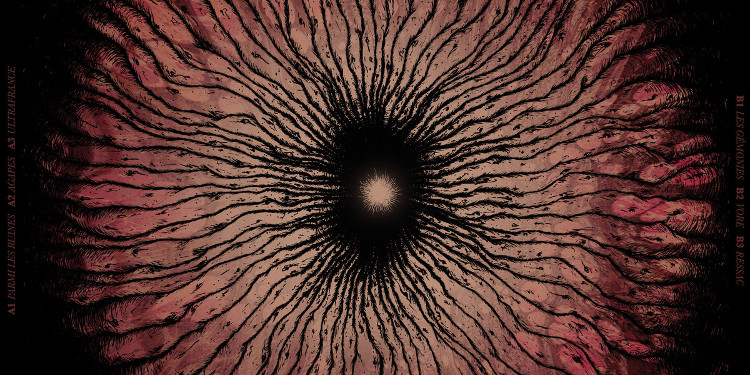 French sludge-core abusers FANGE delightfully return with Pourrissoir – a new and incredibly foul long player of brand new songs that has swiftly followed the release of their inhumanly wretched full-length from 2016, Purge. Not much has changed in the Fange world in a little under a year, and that’s a good thing. Pourrissoir showcases once again the band’s penchant for creating slime-ridden anthems of pure concentrated hatred that reek of the stench of treason and disgust toward the human race. Blending hardcore punk, noise rock, and a downtuned wall of rumbling low end sludge, Fange are masters at evoking sickening visions of a dystopian world overrun by sewers, rats, slime, and of the most caustic toxicity possible and imaginable.

Delicately graced on the cover with what appears to be a brown, irritated and oozing butthole, within seconds of pressing play Pourrissoir assaults the listener with an inhuman barrage of craven violence – and then simply does not let go.  Opener “Parmi Les Ruines” is six-plus minutes of deranged hardcore punk covered in flies. An abomination that punishes the listener mercilessly, sounding like a bastardization of Cavity and Entombed, if something so wretched is even imaginable. The following bruising track, “Agapes,” sees the band get down to business in truly repellant ways. Noisy as fuck, totally lawless, strangled in feedback and overriden by worms, this track is a seriously hideous aberration to have to endure, where surprising and previously unseen noise and power electronics striations begin to leak through the repellant wall of guitars. The following track, “Ultrafrance” (what a fucking weird song title…), clearly shows us how these noise leanings were not just an episode, but a harrowing intent. Its music-less and abstract knob-tweaking pedal abuse is an homage of sorts to the fringe experiments of bands like The Body and Full of Hell, where pure noise and feedback are sapiently woven to disgust, harass and crush the listener with the most unbearable forms of sonic torture possible…Mission accomplished.

The second half of the work unfolds starting from the slow-moving rot magma of “Les Gémonies” – a deformed doom track that sounds like Unsane on fucking downers. Deranged and angular riffs paired with syncopated drumming and underlying hiss of feedback slowly but surely lock the listener’s mind into a chasm of revolting static and of cyclically repetitive and punishing riffs that first trance-induce and then batter the flesh with unseen sadism. “Vore” appears to be another experimental knob-tweaking experiment gracefully enhanced with psychotic screams, sounds of vomiting, and other very delicate aural atrocities that sound like field recordings from a mental hospital’s shitter.  “Ressac” is the endgame of all musical decency in Fange’s dysfunctional and distorted world, where a rampage of d-beats and a pulverizing swarm of ultra-distorted guitars literally assault the listener like a mauling from a pack of rabid dogs in the street of a slum, devouring the senses in an utter bloodbath of aural terror.

What more to say? Not much, aside from: Fange have done it again. This is a band that finds it impossible to find a balance or any kind of musical decency in their sound. When it comes to Fange, everything should be mindless; everything should be off-balance, ill, deviated, unworthy, and fucking vile, with no possibility of ever being fixed or barely pleasant. Out now on Throatruiner Records/Deathwish (US store here) and Lost Pilgrims Records.