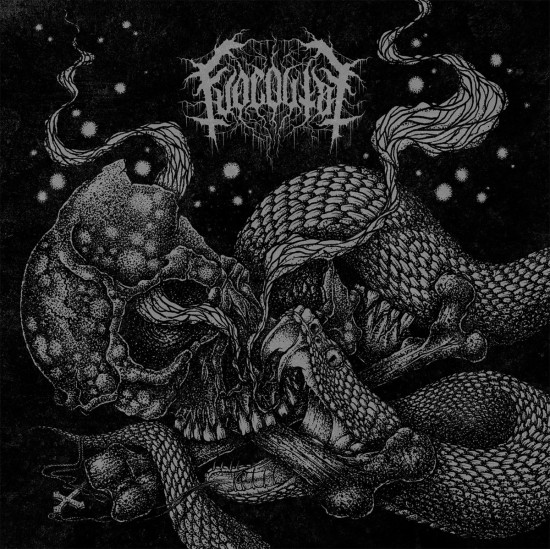 FUOCO FATUO have crushed all competition and have plowed their way to the forefront of Italian extreme doom in the last few years. Slowly but surely, these three Italian misanthropes have woven a path of destruction in front of them in the European underground with the sole aim of leaving absolutely nothing standing in their wake as they trample over everything. After releasing a handful of EPs and splits, the band has finally emerged from the sewer it was birthed in with a weapon of conquer: a full-length album of brand new songs that only strengthens their status as stalwarts of all things heavy, violent and fucking downtuned to no end in Italy – The Viper Slithers in the Ashes of What Remains.

The Viper Slithers in the Ashes of What Remains (out now on Iron Tyrant) may not be the most original sounding extreme doom album you will hear around, but that’s not the fucking point here. Yes, we’ve heard it all before; all we need to do is go and polish off those legendary Evoken, Corrupted, Disembowelment, Winter and Incantation albums to hear where this style of music and these riffs all originated and where its true glory stands. But what really matters in this instance is how FUOCO FATUO have brilliantly added more substance to this equation and have greatly improved all aspects of the genre, releasing an album that is indeed both iconic and predictable, but because of this, also proud in its traditionalism. This album can stand with its head way up high in the genre, representing one of this year’s best instances so far in the world of death-doom and the like.

FUOCO FATUO‘s music is essentially made of catacombs, tombs, cemeteries and layer upon layer upon layer of rotting fucking death. The guitars are so downtuned that they sound like enormous black holes full of maggots, and the tremolo pickling is so piercing and grim that it sends instant shivers all over your rattling bones. The rhythm section is the sound of pure coma. Of absolute and unadulterated hammering death. It’s like having your head stomped on by a zombie mammoth and feeling your skull cave in one enormous punishing blow at a time, as if everything where in a frightening slow motion of absolute horrifying terror. Then come the vocals. The howling of depths so deep and steeped in death and desolation that they just add an extra layer of immanent and omnipotent evil to an album that is already made of it. There isn’t much else to add – it isn’t rocket science, and it’s definitely not fucking quantum physics either. It’s just exactly what you would expect from Nihilist-styled old school death metal and extreme doom metal if you make them have a bastard child: slow, crushing, sepulchral, mortiferous, horrifying liturgies of hate and malevolence. Don’t stop and overthink it too much, just come and get fucking doomed to death! In this article:death doom, DOOM METAL, fuoco fatuo, sludge doom, SLUDGE METAL, The Viper Slithers in the Ashes of What Remains