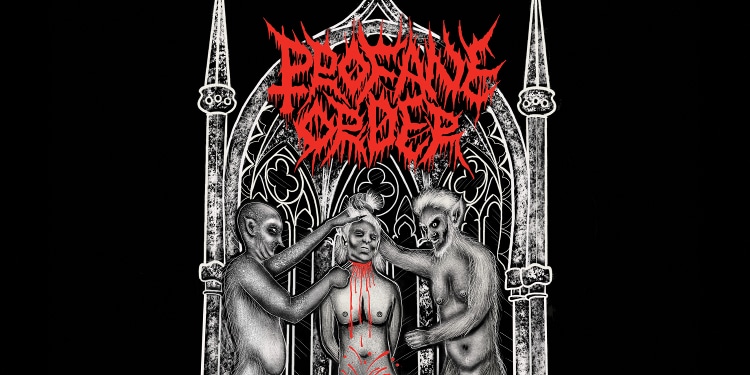 Today we’re stoked to finally bring you something that has been widely anticipated and that will surely end up sitting atop the pack of elite war metal releases this year. It was 2016 when Canadian war lords PROFANE ORDER first unleashed their sonic warfare upon the world in the form of debut LP Marked by Malice, an incinerating onslaught of bestial sonic chaos that set harrowing precedents for something marvellous to come. Then when the followup EP Tightened Noose of Sanctimony dropped, it had become clear that neither were an arrival point, but a stepping stone leading up to something abominable but not yet completely fulfilled.

Tightened Noose of Sanctimony trumped Marked by Malice in every way, yet felt like it could open the gates to an even higher order and magnitude of destruction, and that’s exactly where Slave Morality, the band’s brand new sophomore full-length LP, closes the circle and puts the final seal on Profane Order’s undisputed status of absolute weapon of mass destruction in sonic form. On Slave Morality all of the band’s most terrifying traits blossom into an onslaught of aural warfare and blinding terror that knows absolutely no end or boundary, and the album stands high as one of the most uncompromising, feral, and lawless slabs of musical terrorism that has been put to tape all year. Press play and witness for yourself…

While the band’s lineage is not hard to trace as it fits perfectly within the paradigm of elite Canadian war/goat metal, their take on the genre is also something that stands completely on its own. The “patient zeros” of the descendancy, Blasphemy of course, bless the whole ordeal from atop the pile of inevitable inspirations, and all the most accomplished historic acts show their influence on the work, from Proclamation, to Conqueror, Black Witchery, Impetigo, and beyond… Yet, Slave Morality sounds like all of its natural influences and unlike anything else at the same time, as the band has condensed its influences, distilled them meticulously into a purified form, and then recombined them anew into a deadly and mortal new alloy of modern extreme metal warfare entirely its own, which while traceable back to a clear school of thought of bestial black metal, also sounds unlike anything out there, blending black metal, death metal, and grindcore to absolutely devastating effects. You may notice in the vocals the approach is absolutely unreal and borderlines avant-garde as they are so processed and abstract in their unrelenting ferocity. In the same way the crisp and clear production is marvellously matched to a performance that is tight and surgically deadly in a way that is not too common for the genre, with perfectly interwoven bursts of guitars and annihilating drum patterns that paint a ghastly picture of harrowing cruelty and of lucid brutality, showing that the band is in full control of their warp chamber of controlled chaos, and musically/technically somewhat in a league of their own here.

Profane Order’s Slave Morality is an unholy declaration of war that will leave fans of Diocletian, Necroholocust, Heresiarch, and Death Worship on their knees begging for more, and is set to be officially released tomorrow October 18 through Sentient Ruin on vinyl LP (get it HERE), Krucyator Productions on CD (get it HERE and HERE), and through Les Fleurs du Mal Productions on cassette (get it HERE).