Prayer of the Mother of Tears: Santa Muerte in America - CVLT Nation 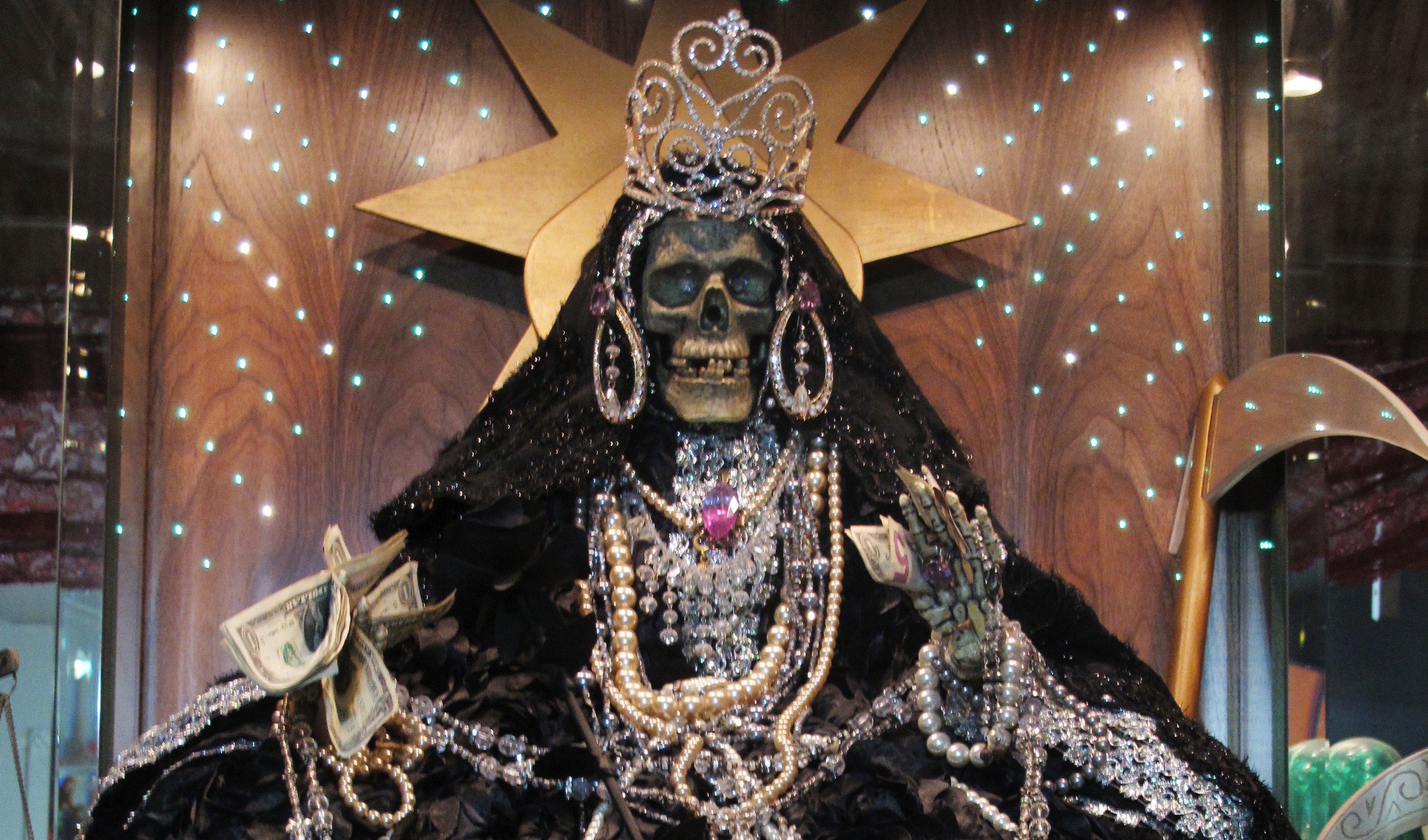 Across Mexico, and increasingly the U.S, the poor, the down-trodden and the outcasts have been turning to a robed, scythe-bearing skeleton – a personification of death fond of cigars and tequila, able to work miracles, but always for a steep price.

Santa Muerte, Saint Death, emerged in the nineteenth century as a syncretism of Catholic and pre-Columbian beliefs. An exact date, or even a rough approximation, is impossible to come by – the saint’s worshipers meet in secret, in back-room shrines, and only in the last decade have ‘official’ places of worship opened their doors. It is possible that the cult began in Mexico’s southern provinces, where native identity is stronger, but nobody can be sure. A female skeleton who guards the underworld appears in Aztec beliefs as Mictecacihuatl, who, along with her husband Mictlantecuhtli, rules over Mictlan, the abode of the dead. Dead souls had to survive nine years of torment before they could pass into Mictlan, but offering to the Lord and Lady of the underworld helped, a tradition that survives into the present as the Day of the Dead. Mictlantecuhtli (left) from the Codex Borgia

The saint draws her followers from the poor and marginal classes. Though worship is now widespread, the common profile of a Santa Muerte worshiper is that of an outlaw – a drug trafficker or a prostitute. To a Coyote crossing the border or a woman about to walk the streets in Ciudad Juarez, death is always an imminent possibility, more real than the pious, serene mainstream Catholic saints. The church is not available to absolve them; any forgiveness they might provide is always coupled with judgement, so turning to a fictional death-god in these circumstances makes sense. Mexico’s LGBT community also finds solace in Santa Muerte (her name is often invoked during same-sex marriage ceremonies), as do women from all walks of life, who make up the majority of the saint’s devotees. They supplicate themselves for luck in finding love, help with debt, success in business; anything that they want but can’t get without supernatural help. Intercessory prayer isn’t exactly unheard of in Christianity, but it is generally frowned upon – “true” Christians are supposed to pray for others or to strengthen their own faith. Santa Muerte promises relief from real world problems. Of course, there is a huge element of illusionary correlation and observer bias in the saint’s ‘miracles’: when something that is prayed for arrives, it can only be because it was prayed for (same with Homeopathy – if you take a homeopathic remedy and you recover from a cold, then it can only be because of homeopathy, never because colds just naturally fade away given time). If it doesn’t work, then you didn’t pray hard enough, or you didn’t make the right offering. If it works, but something bad happens right after, then that’s just Santa Muerte extracting payment for the miracle. People’s in-built cognitive biases help build and sustain the saint’s reputation for getting things done. Because Santa Muerte has no real priesthood and no written doctrines, her believers can read anything they want into the figure. There’s no real agreement on what Santa Muerte is: she’s obviously not a real person, like the majority of mainstream saints, or a folk-saint who may have existed like Jesús Malverde, so some believe her to be a fallen angel trapped in purgatory, performing miracles to buy her way back into heaven. However, she’s perfectly willing to curse one’s enemies, or even curse her followers if they worship other saints. This doesn’t repel her believers; like their counterparts in much of the world, working-class people can’t simply expect good things to happen. A capricious, jealous deity who needs to be plied with cash and offerings of tobacco and alcohol is one that human beings can relate to.

Worship of Santa Muerte has spread to the US as immigrants from the poorer, more indigenous southern states of Mexico start to cross the border in increasing numbers. Shrines have been established as far north as Richmond, Virginia, and are probably far more widespread than anyone realizes. With no priesthood to hand out titles, all you need is a statue, some coloured candles and a few prayers that are easily found online. In her home country, Santa Muerte has gone from underground cult to a small, but fast growing, supplement to the Catholic population’s faith. In Santa Maria Cuatepec, one believer, or perhaps opportunist, has erected a 75 foot statue, which reportedly is giving local children nightmares and causing dogs to howl. In Mexico City, the Sanctuary of La Santísima Muerte is popular with believers, and the attached store does a brisk trade in statues and candles. North of the border, there are shrines in New Orleans and Miami with worshipers from outside of the Latin American diaspora, most of whom are middle class and college educated.

The Catholic church has struck back, with the Vatican’s culture minister calling the worship of Santa Muerte ‘blasphemous’ and a ‘denigration of religion‘. Its followers haven’t always stuck to lighting candles, either: eight worshipers in the tiny mining community of Nacozari were arrested for killing one woman and two ten year-old boys in order to gather their blood for an offering to the saint. There have been no other murders attributed to Santa Muerte, but her veneration by drug traffickers means that her believers are unlikely to truly enter the mainstream soon.

Because of the saint’s versatility and the promise of real world solutions in place of spiritual pabulum, there are now somewhere between 10-12 million followers of Santa Muerte, and it’s the fastest growing religion in all of North America. That’s less than one in a every hundred Mexican citizens, and even less when you factor in the entire American landmass; but it’s far from nothing, and it’s growing every day.