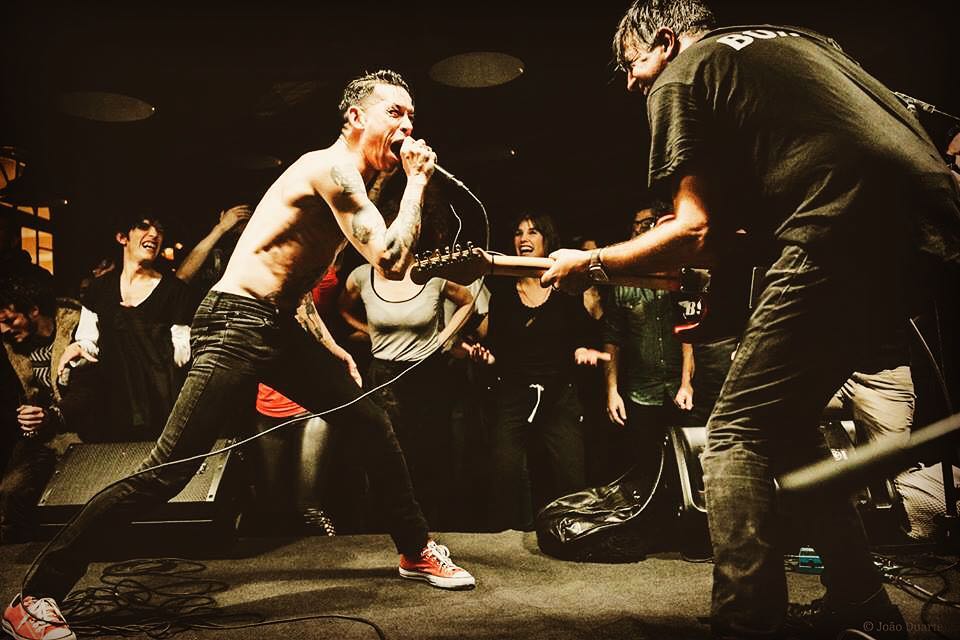 Back in the 2000s, The Parkinsons used to be the next big thing. They were the next in line to save rock n’ roll, right up there with The Strokes and The Libertines. But they didn’t care then and they don’t care now. For most people, that means that they didn’t make it. But The Parkinsons aren’t for most people. And where the fuck are all those saviors these days? Because The Parkinsons are still here. And they’re like over 40 now – not that that matters, because if you happen to catch them live you’ll see they have more spunk than most junior bands these days. That’s probably because they were raised amidst chaos and fury and all that shows when they play. In fact, Torpedo, the guitarist and one of the founders, explains that they are a band always on the verge of self-destruction. Kind of like The Stooges probably were on their heyday. Not that I’m making comparisons here, because ’60s Detroit is not 2000s Portugal, and anyway, there is only one Stooges. But I can guarantee you that there is also just one Parkinsons too. When they first got together, they sounded darker and probably meaner than they do now but their songs are just as good, if not better. They sure as hell are catchier and more contagious than most bands around, and in that regard owe nothing to the best of their game. It’s not that they are getting poppier, because they’re not and The Parkinsons are still full on nihilism as they always have been. You can sort of feel the claustrophobia and despair emanating when Afonso sings about what could be any city in the world or living being a hard job, but most of all you feel that even though the world may be falling apart, these are the kind of guys that say fuck it and grab one for the road.

So, when a band with such pedigree releases a record entitled The Shape of Nothing to Come, I guess that’s pretty much a statement about the fact that the future is dead and it was probably murdered by The Parkinsons. When I ask Torpedo if the record name is a wink to Refused, Ornette Coleman or H.G. Wells, he explains that, even though he digs them, Refused are the target here. Well, it probably makes sense when you look back to what Refused were and what they are now. I guess it’s one of these cases where the future should have stayed dead, or like Refused themselves once explained it on “Summerholidays Vs Punk Routine”: rather be forgotten than remembered for giving in.

With songs so contagious, you would probably expect that such a great band that used to be on everyone’s mouths and years 18 years ago, would get a lot of attention these days, especially when they are probably at the top of their game. But The Parkinsons are not interested in attention for attention’s sake; they only want to be listened to by people who matter, and most labels and media are not to be cared about. Hell, they were the ones who spat at the chance of selling their souls to the devil, so I’m guessing it’s not now, almost two decades later, that they would flinch. Remember, we are talking about a band that were considered the next Sex Pistols because of their outrageous behavior. Legend has it that Afonso was so drunk at Reading in 2001 that he greeted The Strokes whilst smearing chocolate fudge cake on his dick before flicking it in his visitors’ faces, while his girlfriend was “forcibly ejected” by security staff after running onto the stage, topless. I guess that if that lesson wasn’t enough for The Strokes to man up, then nothing will ever be. The thing is, rock n’ roll, and particularly punk rock should be dangerous and inspiring, not a soundtrack to sell commodities. Provocation just makes things better and The Parkinsons are leaders in that competition. That’s why it’s no surprise when Torpedo tells us that music these days lacks chaos. Shit, chaos should be the primal ingredient in all things punk and related, otherwise it’s just a bunch of fucking choirboys playing instruments – badly in some cases, uninspired in most. Of course, chaos comes with a price, and maybe that’s why The Parkinsons have a curse. The curse of The Parkinsons is with drummers. This is like their 13th drummer, which for a band that has played for about the same number of years, is quite a lot.

Do The Parkinsons of The Shape Of Nothing To Come sound different than what you expect, if you’ve been listening to them for the last decade and half or so? Not at all, but that’s a good thing and they sound as tight as a nun’s chastity belt. It’s all still the perfect soundtrack for sweat, beer, behaving badly and naked bodies. And this time they sing about a sexy Jesus, being alone in the car, playing heavy metal or burning down with the same sense of urgency and disorder as ever. If that doesn’t turn you on, then you are dead. As dead as Refused used to be, before they got back together. In this article:'77, 1977, britain, garage punk, portugal, post-punk, postpunk, punk, punkrock, The Parkinsons, The Shape of Nothing to Come