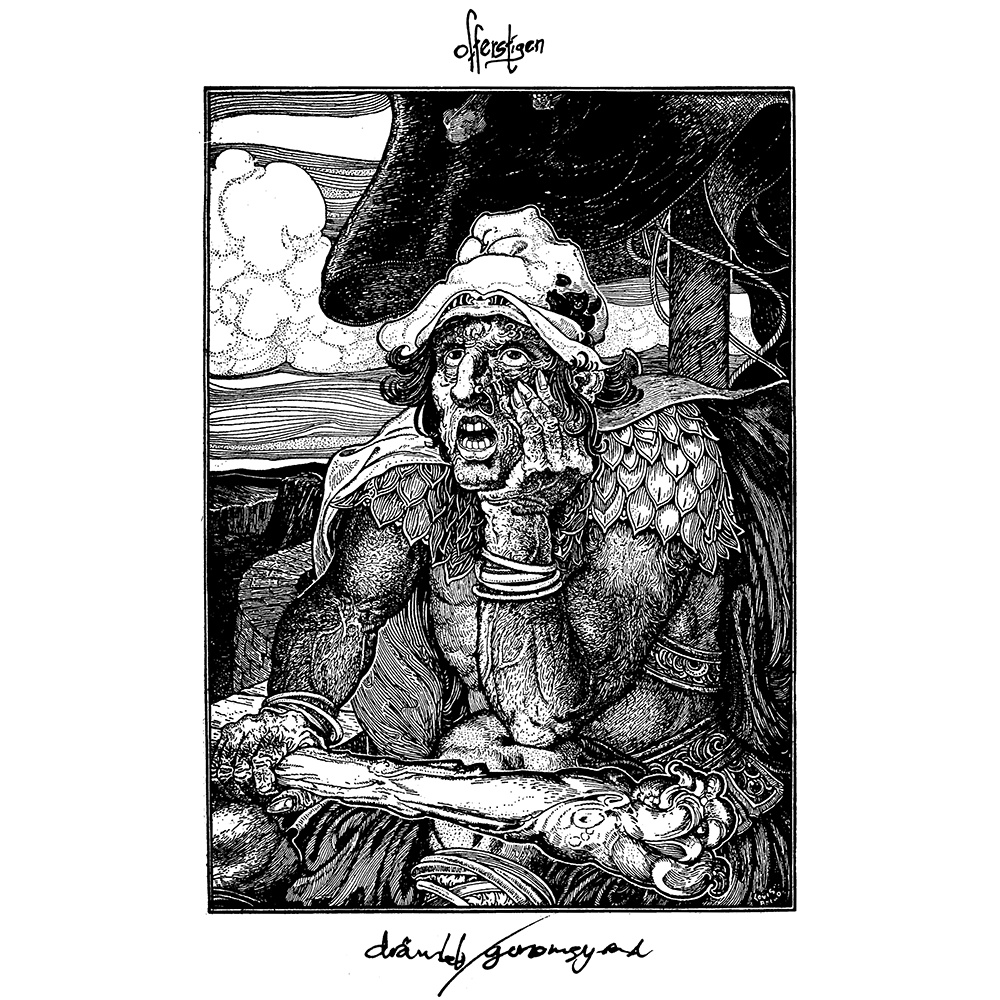 Hailing from Sweden, Offerstigen are unleashing their debut album, Drankt/Genomsyrad, making it their third overall release. The duo started things off with their EP, Regndolk, and then followed that with their rehearsal demo, Solens Inalvor, both of which were released in 2014. Offerstigen is taking parts of funeral doom and sludge metal and throwing on top of that some black metal twists, making this album quite daunting.

As you can guess, the pace of the album is slow, since the band finds itself on the extreme edge of the doom spectrum. When Offerstigen let their sludge persona surface into their music, the tracks are overwhelmed by some really intense groove. The manner in which “Ytvandrarna” kicks things off is a testament to that. The curious thing here is even though there is a quite old school feeling about the album in general, there still are parts of the tracks that seem to be a bit out there. Take “Ytvandrarna” for instance, which includes some dissonant leads, usually found in the work of more experimental sludge acts. The sludge side becomes more straightforward when that is needed, as is the case with “Celest -Saknad,” with the groove returning and the punishing riffs at large. Especially the addition of lead parts near the end of the track certainly makes a difference. And then you have a song such as “Forstor Allt,” which comes in with its huge sound, and for most of the duration of the tracks, it keeps forcing its grueling riffs down on you. Once the tempo of the track quickens and the leads in the background appear, there is nothing that can stop the impact.

But Offerstigen can switch from one mode to another quite easily. Just a flick of the switch and you suddenly find yourself amidst their funeral doom realm, with the pace taking a step back and the groove fading away. The second half of “Forstor Allt” is a demonstration of this mentality, with the track losing its impact and power, but gaining in despair. With the cutthroat vocals always assaulting you, Drankt/Genomsyrad becomes quite an intense listen. When Offerstigen throw their black metal outbreaks towards you, then the whole thing goes to another level. The first interesting twist appears in “Ytvandrarna” with the tempo suddenly changing to faster settings. Still, the mindset of Offerstigen does not allow for the doom/sludge riffs to disappear, so as you have the drums blasting away, the heavy riffs still remain present. What all the above elements contribute to greatly is the construction of a very menacing and intriguing ambiance. The intro and outro of the album are used for this sole purpose. The guitar feedback in the intro sets the tone of the album, and the smooth playing creates a darker atmosphere for what there is to follow. The songs themselves can travel to different atmospheric fields. The inclusion of some clean background vocals on “Ytvandrarna” invokes a more open and epic ambiance for the song, with Offerstigen then taking a turn for the minimalistic near the end of the track, with the inclusion of tribal-esque drumming and solitary guitar strums. “Celest – Saknad” and “Forstor Allt” find themselves within a more dystopian setting, while the outro of the album sees the band adding a voice sample in order to extend their ominous intentions. The manner in which the atmosphere becomes tense as the vocals appear and disappear in the foreground is something unto itself

Offerstigen make great use of their doom core, no matter if that has to do with sludge or funeral doom. The outbursts of black metal further enhances the feeling of the album with a towering ambiance; they are able to put everything together in the most suitable way for their style of playing.