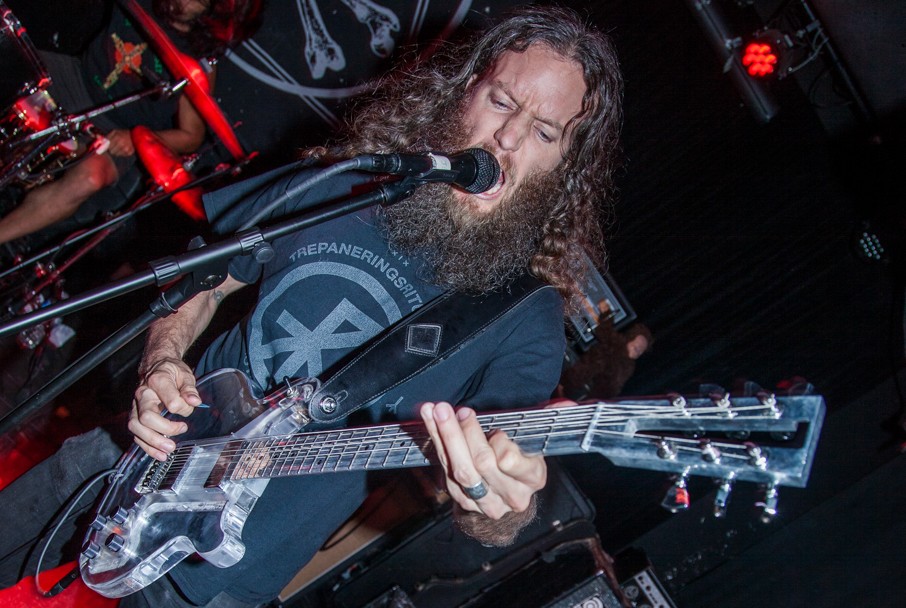 Thursday – or Thor’s Day for all you Odinist’s reading this – is perhaps the most trying day of my week. I typically get up around five-thirty in the morning for work. Clock out around four, give or take. Followed by some supremely brutal, buy-one-get-one-free happy hour binges. Which, more often than not spills over into the rest of my night. The end result being me on the couch all of Friday lamenting the mistakes I made last night and vowing to never engage in such behaviors ever again. It’s a vicious cycle that these Thursdays have become. One that desperately needed to be bent over and and broken, so to speak. Thankfully, on September 3rd, an event rolled into Brooklyn that forced me to keep my wits and keen powers of observation  in fighting form. Old Man Gloom and Mare were playing tonight at the haven of metal here in New York City, Saint Vitus. I’m not gonna lie to you, dear reader. Yes, there was some happy hour involved alongside my stalwart, visual chronicler of all things under the sun, Nathaniel Shannon. I mean, it is Thursday after all. But actually having to be somewhere broke up the usual grind that has become this celebrated day of self-indulgence. That being said, we kept our cool and an eye on our watches in order to get there in time. After settling up our ridiculously cheap tab, we headed over for a quick bite of barely warm pizza and finally grabbed a cab into Brooklyn. To say that it was perfect summer night would be an understatement. The hot, humid weather that had been suffocating the city had finally broke a bit, allowing one to really enjoy the night-time atmosphere. It’s also important, almost vital, for you to realize that while I have been a long time fan of Old Man Gloom, I have actually never seen them in live setting. Between their lengthy periods of inactivity due to other projects or just not being in the same place when they played. To say that it was sore spot on my Metal Report Card is a pretty accurate statement. We arrived at Vitus with enough time to sidle up to the bar and grab a drink before entering the actual venue. Mare, a band that I wasn’t intimately familiar with, were just about done setting up. And for a band that existed briefly and had reunited for a handfull of shows over the last couple of years, their following has remained strong. In fact, the sheer amount of people that had turned up to see them kinda stunned me a bit. Perhaps that fact is due more to my ignorance of them and their impact – but at this point in time, that doesn’t really matter. What I do know is that I immediately fell in love with this project when the opened up with “Anisette.” Their ability to shift and contort between sludge-filled Doom metal and heavy, jazz influenced playing was remarkable to see in the live setting. Caleb Collins (also of Circle Takes The Square) is an absolute beast on the drums. Just watching him effortlessly fly around on his kit was a marvel to watch. Over the years and all the shows that I have attended, watching a drummer was always my favorite part. Even the shittiest, local punk rock bands that I saw in my youth, the drummer always captivated my attention. Caleb, is a fucking bionic octopus with his drums. Engineered by the government and injected into our sub-culture to truly test other drummers. No fucking joke. What surprised me even more over the course of their set was singer/guitarist Tyler Semrick-Palmateer’s ability engage in banter between Collins and even the audience. He seemed loose, friendly and comfortable with talking to the crowd, which is a nice change of pace when one is used the standard metal singers’ antics and cheesy statements. In addition to his sense of humor, it’s apparent this dude loves playing music. From the different ranges that he can switch between vocally to his guitar playing, just watching him (and his counterpart) was a real surprise for me, one that had me kicking myself for not getting into this band all those years ago, as this set might have been a little more special for me. As Mare descended from the stage, Mr. Shannon and I quenched our alcoholic cravings with another round as we discussed what Old Man Gloom‘s set was going to contain. I wondered – as this band is fond of pulling pranks – if they were going to say fuck it and just play stuff from “Seminar II” or “Seminar III,” which I would have totally been fine with. As I mentioned earlier, I’ve been a huge fan of this project for years, and often went to sleep to those two albums. But the proper, more accurate assumption would be that they would drop a few older songs from “Christmas” and “No” mixed in with their newer sonic offerings from “The Ape of God.” Regardless, I was extremely stoked to finally have the chance to see these dudes lay down some concrete-wall sized music. Positioning ourselves almost in the front row, I braced my body and mind for the hammer that was about to be brought down on me. As the time approached, the collective members of Old Man Gloom prepped their chosen weapons of war and unleashed a dirge of feedback for a few moments, shattering my unprotected ear drums (lesson learned on that one, folks.) Without even a “Good evening Saint Vitus, we’re Old Man Gloom,” the band launched into the destructive battery that is “Skullstorm.” My socks were knocked off and my heart was pushed straight out of my rib cage from the sheer of volume and ferocious onslaught summoned forth from this project. Without missing a beat, the band launched into “Afraid Of,”  preparing the crowd for the inevitable Doom/Drone songs that were to follow. What caught me off guard was their willingness to go back into older releases with this set. An explosive bombardment ensued, as they wrought “Sleeping with Snakes” from the album “Meditations in B”, which was released back in 2000. So far into their set, I was beyond please with this offering, but was eager and hungry to hear some of the newer stuff, in which I wasn’t let down. As if they sensed the need to slow things down a bit, the band catapulted themselves into “Shoulder Meat and “The Lash.” Both songs were captivating in the live setting, leaving me hankering to have another sit down with their newest record when I fully recovered from the inevitable ear-ringing and hang-over that was to follow the next day. One of the biggest impressions I took away from this night was the chemistry between these guys on stage. We all know these dudes have been playing together for little over fifteen years now. We also know that they had a huge, eight year hiatus where they focused on their own respective main projects. So to see a band composed of close friends, who occasionally get together to make some sweet music, that really boils down to the true meaning of our underground culture. No hype, no thrills and no David Lee Roth gimmicks. Just four people doing what they love most. And it absolutely seeped out of their pores and washed over the hypnotized crowd with such songs as “Burden” and “Predators.” I’d also like to take a brief moment here and express some concern for Aaron Turner’s physical well-being. I was lucky enough to catch Sumac both nights when they played here in Brooklyn a few weeks ago alongside the titans of metal known as Neurosis. Both shows were incredible, in case you haven’t heard. So to jump from one, monumental ass tour to doing another, is no simple feat; and god damn, this dude doesn’t just head-bang like the rest of us when he plays live. He body-bangs. Using every fiber and muscle of his being to sway back and forth like a metronome. At certain points, I just sat there and wondered if they had a permanent chiropractor on the tour van, just in case he goes a little too overboard one night and needs to be realigned. I could sit here and dissect and describe every song they played, but honestly, this would end up being a massive undertaking and really, a feeble effort on my part. As they worked through their set list, unloading one noise-filled bullet after another, I was just simply glad to have finally seen them play live. Like a fine wine, all these years of missing them enhanced their set list for me. More so that they actually played songs I didn’t expect to hear live, with a healthy dose of new material for those who might have just jumped on board with this band. As their set closed out with “To Carry The Flame” and “Bells Dark Above Our Head,” I walked towards the bar alongside Nathaniel, barely able to hear anything, but with a simple, goofy-ass grin on my face. Gloom landed here in Brooklyn with a deafening, earth shattering sound, and it was time for another beer to celebrate that fact. Till next time, gentlemen. 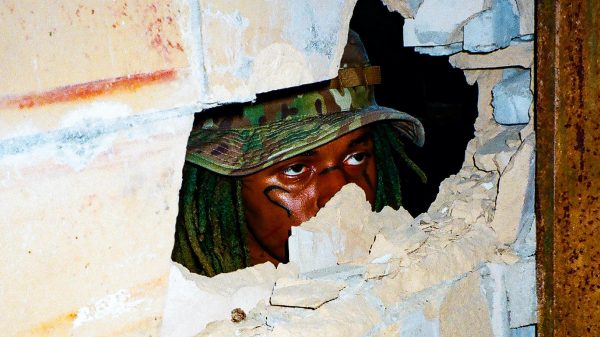 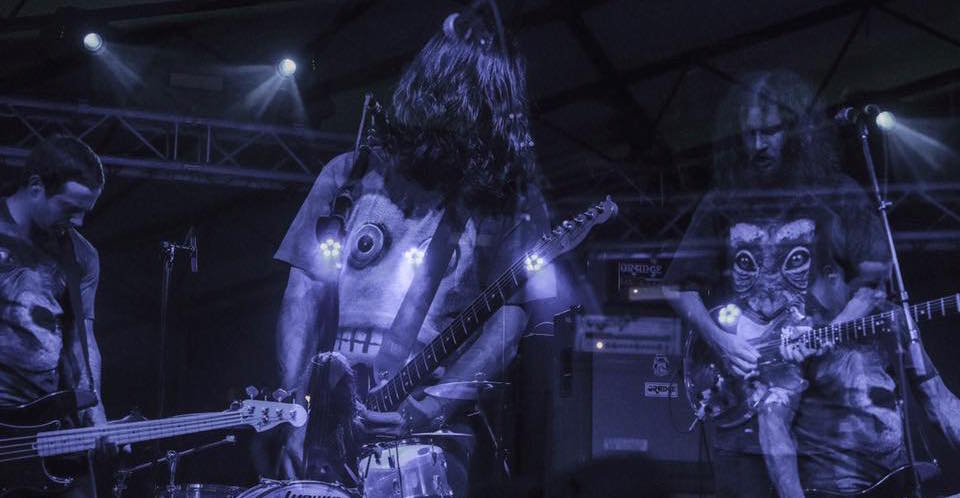 The year was 2004, and I discovered a band that would change my life – OLD MAN GLOOM. When I heard them I could...