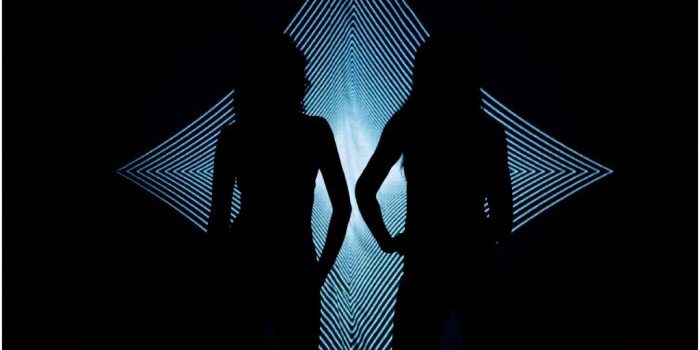 Australian dark electro duo Mezko‘s brand new 3-song EP Syzygy is out now on Anti-Language Records! If Mezko isn’t on your radar yet, you’ve definitely been missing out. These two have been creating fun, indulgent electronica for the last few years including a slew of eye-catching music videos (the latest of which I’ve included below). Every song on Syzygy is would be fitting on the Party Monster soundtrack, and their videos have enough glitter and blacklight paint to leave James St. James awestruck. It’s club music with an edge– it really doesn’t get much better than this, folks.

I had the glorious opportunity to interview the girls behind Mezko, Kat and Laura about their influences, inception, Syzygy, and more. Read on!

I understand when you were young, Kat was into grunge and shoegaze while Laura was into metal. What bands were you influenced by back then? How old were you when you began playing bass and guitar respectively?

We both started started playing pre-teens with CD collections that mainly featured 100% Hits albums. Then sometime in high school Kat found Nirvana and Laura found Metallica. From there it was onto Sonic Youth, Pavement, My Bloody Valentine and the associated greats. From metal, to Australian hardcore to The Cure and back to psych, soul, funk and disco. We came in via different gateways and ended up at the same place, where we were looking for something new.

How long ago were you two introduced? What bands had the most influence on you as you were getting into electronic music together?

A long time ago, on a special day, a mutual friend told us about each other… We then shared whiskey and it worked out great. We were both already deep into our holy trinity of French electro (Daft Punk, Air, Justice), also Factory Floor, Fuck Buttons, Soulwax and everything on their Deewee label. There’s some influence in there from parties and club nights too. Sydney legends like Motorik are people we both admire and can rely on for an excellent night of tunes.

The new video for “They Like We Like” is so fun! Your music videos are always very different from each other, what inspired the aesthetics in this one?

We’ve never really thought about our videos being different. They’re just a response to the song from the various people we’ve collaborated with. We made this one at home with our friends. It’s inspired by watching David Lynch and 70s horror flicks together. Do you play with blacklight paint and glitter on stage as well, or is that reserved for your videos? Has it ever messed up any of your equipment?

Haha don’t tempt us… The video toll is enough. The speakers we used for the Trust video… RIP..  They sound like someone dying from a glitter-related asphyxiation. We bring the backlights out for special shows but the paint stays at home… we’ve experienced what happens when liquid and synthesisers collide. Not recommended.

How long did it take you to create the songs on Syzygy? I understand your song writing styles have several different layers to them.

You In Me and They Like. We Like. came out quickly, we wanted to preserve their initial character which is why they are so simple. They’re the result of a 3am writing session and trying to not overthink or overwork them. Come & Go is one that grew over time. We had always wanted to write something with that classic glam rhythm. Its a song where we were chasing and idea. That’s a very different process to songs that just come out. I think we’ll always do both.

Why the name Syzygy?

Its this moment where celestial bodies on their various orbits come into alignment. We’re quite different as people but the place we align is special and these songs are what that currently sounds like.

You two have a very particular, sporty fashion style. Is this how you usually dress, or is it simply the Mezko aesthetic?

ha.. the Adidas thing started out as a joke… now its an addiction…  At the end of the day nothing beats a good tracksuit and boots when you’re lugging around 90 kilos of gear between the two of you.

As musicians who are constantly moving forward, what’s next in store for Mezko?
This year has been huge so far, five festivals and two tours later, we’re very keen to stay home and write. There are emails about a single and a tour later this year though…