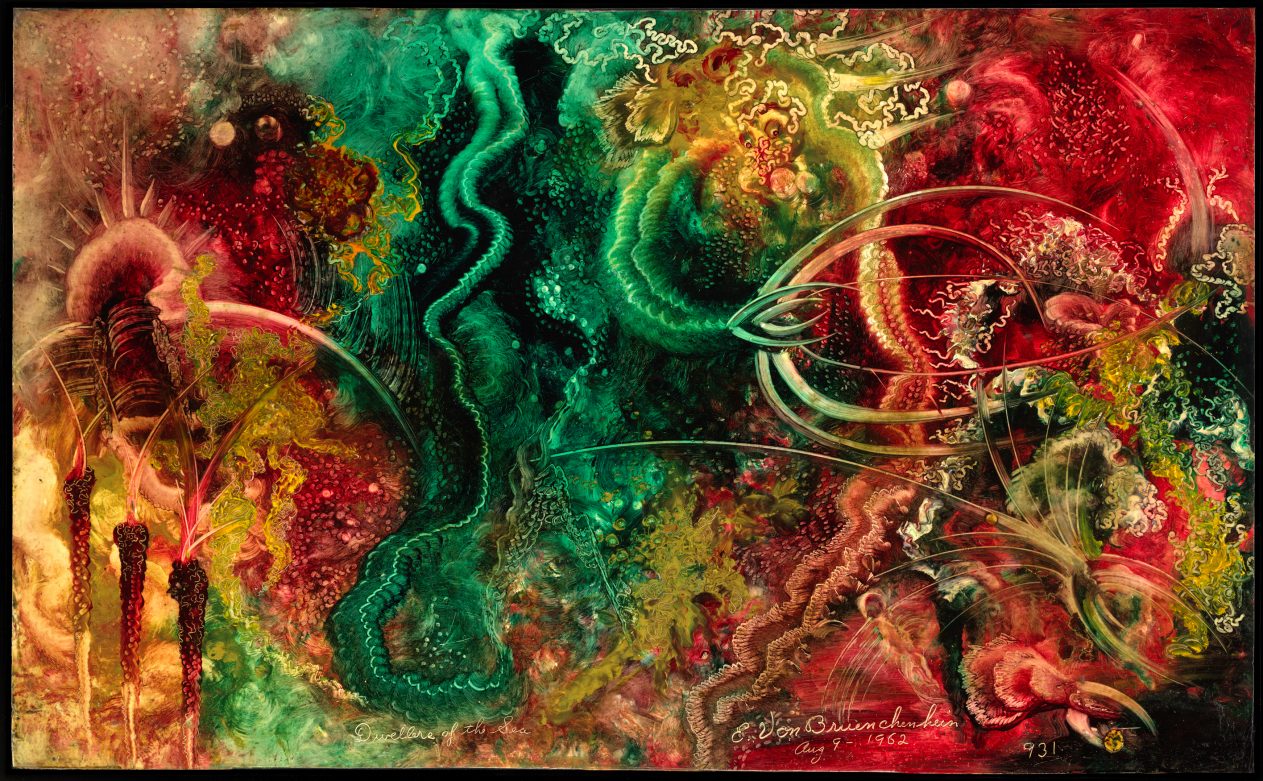 “Who can fathom what has been stored up in only one brain?” wrote the artist Eugene Von Bruenchenhein.

His question could have referred to the enormous collection of photographs, paintings, ceramic vessels, and sculptures of cement and bone that filled his small home in Milwaukee, Wisconsin. As his varied body of work demonstrates, Von Bruenchenhein’s own mind was one of boundless creativity and intense personal vision.

Born in 1910, Von Bruenchenhein appeared to lead a normal Midwestern life. He met Eveline Kalke (whom he called Marie) at a state fair in 1939, when he was 29 and she was 19. They married three years later. The groom’s father gave the newlyweds a house, and Von Bruenchenhein found work as a baker at a donut shop. Nothing remarkable – except that within the walls of their home, the couple built a fantasy world far removed from Wisconsin, state fairs, and the bakery. Today, Von Bruenchenhein is best known for the thousands of photographs he took of Marie in the 1940s and 50s. The images draw on his love of the exotic – tropical and desert plants, faraway lands, and ancient history – but were created within the limits of the couple’s poverty. For a backdrop, Von Bruenchenhein painted the dining room to resemble a tangled jungle. He used floral fabric and items found around the house to craft glamorous costumes and sets for his model, presenting her in every imaginable guise of feminine allure. The resulting images offer a poignant glimpse into the couple’s intimate universe. They also bear the hallmarks of Von Bruenchenhein’s later work with their dizzying combinations of color, texture, and pattern. In the mid-1950s, Von Bruenchenhein moved away from photography in favor of oil paints. A decade before psychedelic drug culture permeated mainstream America, he began painting bright and richly layered dreamscapes that call to mind outer space or undersea voyages. He manipulated the paint with pieces of wood, his fingers, and even a paintbrush made from Marie’s hair, experimenting until the effects were distinctly his own. Von Bruenchenhein claimed that he often completed paintings in a single night. These late-night creations offer viewers a peek at a different side of his inner world: one of myth and magic, as grand and expansive as his photographs of Marie were close and intimate. Von Bruenchenhein also explored ceramics, pen and ink drawings, and sculpture. His poverty deepened after an early, disability-induced retirement, and he sought out materials that would be less costly than paint or photographic supplies. He chose chicken bones, sometimes salvaged from restaurant trash cans, as a medium for building towers and thrones. These delicate and beautiful pieces (some up to five feet tall) provide the viewer with the same sense of wonder that carries through all of Von Bruenchenhein’s best work.

Although intensely private, Von Bruenchenhein was aware of his own abilities and embittered by public indifference to his work. He died in 1983, never having sold his work or shown it publicly. Only after his death, when a neighbor discovered the “Aladdin’s cave” of artwork that was his home, did Von Bruenchenhein achieve the recognition he felt he deserved.

Today, it is not merely the quality of his work that makes Von Bruenchenhein such a compelling artist. He approached each medium as a unique challenge, folding new skills and techniques seamlessly into his creative process. His output was enormous; his energy, seemingly endless. Where did it all come from? Before his death, the artist himself tried to explain.