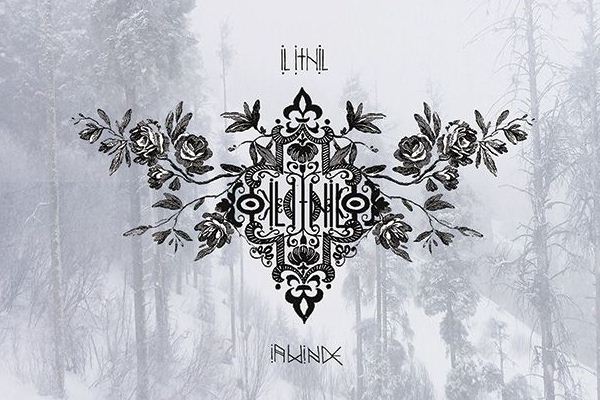 One thing to expect from a solo project is the unexpected. Often comprised of deeply personal, individualistic creativity fed from a focused, singular vision and fuelled by a complete lack of rules, boundaries or compromise, the results can be as intrinsically devastating as they are fascinating. With Idaho resident Blake Green already renowned for creating vast and affecting soundscapes with his most prominent projects Wolvserpent and Aelter, Il’Ithil’s inaugural foray into the solitary unknown is a much less reticent affair, offering up a monolithic duo of dense, subterranean black metal – the bells and whistles of Green’s ingenious mind ever at the forefront of the music.

Whether instigated as a personal outlet or through a desire to create art that does not fit comfortably into any of his shared projects, Ia’Winde is nothing if not unrelenting; a scathing, uncompromising ritual that embraces the frostbitten spirit of the early nineties Scandinavian pioneers, yet warmed with steadfast melodies that eventually come to dominate a significant proportion of this EP.

Despite the icy blast of unforgiving black metal vitriol present in opening track ‘Winter’s Shadow,’ there is a keen sense of exuberance within Il’Ithil’s compositions that not only lifts the music out of a potentially burdensome fate, but also defines it – Green certainly no stranger to conjuring mood through the utilisation of domineering ambiance and atmospheric beauty. As if this wasn’t enough, second track ‘Through The Cold Grey Sky’ enters a whole other world only fleetingly explored by its sister song. Commencing with a wave of dense industrial grandeur, the sounds traverse the steel skies more commonly associated with his other projects. Then without warning, the impenetrable, all-encompassing sonic savagery returns with gusto – at once cold and clandestine; dark and ambient. The harrowing vocals are certainly present yet they are confined to the background; the pea soup production proving incredibly effectual regarding the semblance of the music, if also a little detrimental to the aforementioned vocals and the profusion of sounds and ideas that make up Ia’Winde.

There is so much going on at times that the feeling of clutter is overwhelming, yet instead of becoming a seething mass of disorienting chaos, what emerges is a multi-layered entity that bites and feeds in tandem; Green’s deep sense of cognisance and spacial awareness augmenting the music with admirable proficiency. Green’s decision to release this project into the world is fortuitous indeed, and so long as he continues to explore his creative mind, those who stumble across his creations will surely continue to listen in awe.