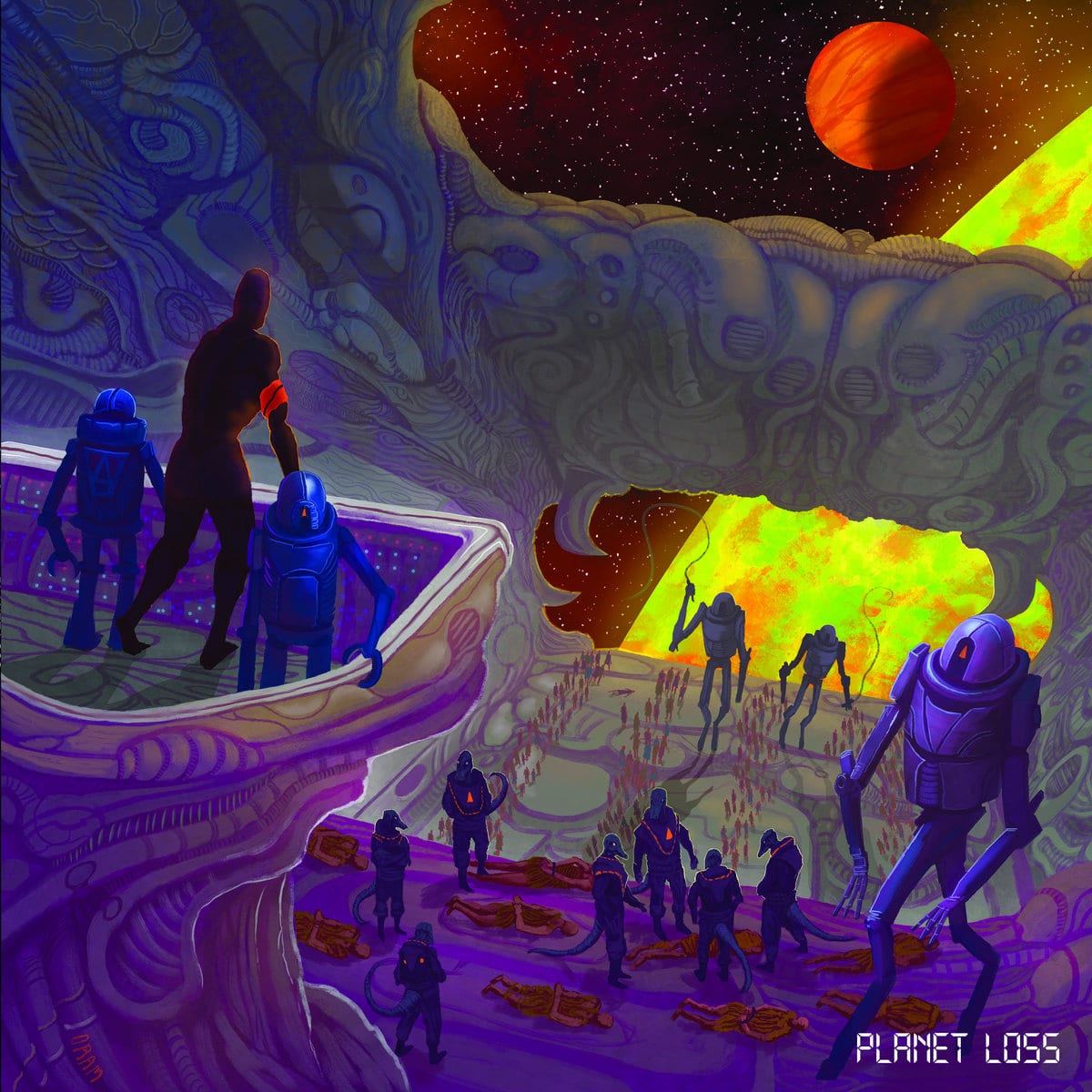 Wallowing’s vibe is bewilderingly heavy; choppy and dramatic, their sound is distinctive and colourful, despite gleefully taking elements from across the spectrum of extreme, destructive music. Drilling a little deeper, one unearths a rich and tattered tapestry of extremely grim stories, their sprawling tales a backdrop for their devastating volume.

As they release live versions of their devastating saga and some unique tie-ins, we sit down with the band to discuss their bleak vision of sci-fi, numerous collaborations and their new line of action figures…

CN – Could you give me an overview of the story/ stories you’re telling?

Tom Harrison (guitars) – ‘PLANET LOSS’ tells the story of a small group of rebels fighting the make and break fight to reclaim their home planet from an evil tyrannical overlord who has run their version of Earth into famine and turmoil for their own selfish gain.

The album is broken into four main chapters which detail the realisation of living within a broken system, the anger felt toward the overlord and their governing regime for allowing this to happen, the forming, marching and battle for Planet Loss, and the outcome of the battle itself. Each chapter mirrors a current world issue such as the current political climate, racism, homophobia, classism and discrimination as a whole, capitalism, consumerism and its effects on humanity, as well as mental health and the stigma surrounding it.

CN – Do you have the whole story written? Is it one long story or is it over several short stories?

Tom – The lyrics for the album have always been the story. They were written as the kind of inner monologue of the first rebel who ‘wakes up’ to everything happening around him, who then proceeds to form the rebellion and tries to bring harmony back to the planet. We are yet to release the lyrics in full as of yet, as we have been working on a special format to release them in, which is looking to be completed by the end of this year.

‘PLANET LOSS’ is one singular story, although I think we would all like to contribute further to the universe we have created, so you may see more “in world” stories cropping up over time.

CN – You’ve spoken before about the bee suits and how they came about. Is this a part of the plot for the story?

Zak Duffield (vocals) – The bee suits started out as us just messing about really, they were never meant to be anything to do with the story. But it’s funny that they’ve kinda become one of the ‘symbols’ of the band, and yeah now it’s funny to me to work them into the ‘lore’

Jon Wingrove (drums) – It kinda works in a way ‘coz they look a bit like weird space suits – but that’s just a coincidence, really.

Tom – 100% a lucky coincidence that we managed to pull them off as “space suits”, but after receiving such a strong reception from performing in them, it made complete sense to build upon it and give context to it all.

CN – Having done this, are there any more story elements you’d like to explore in the future?

Tom – We are constantly building on the story of PLANET LOSS. Our art-figure release (in collaboration with artist Delicious Again Peter) coming up late July exclusively teases our next “in world” project for people who purchase the item via the back cover. We have also started a “Join The Rebellion” sign-up campaign via our website – which allows people to join the “in world” rebellion and receive free physical mail outs to their address from fictional characters within the story.

We are always keen to expand upon the story in every and any way possible in order to truly get the story across in as much detail and depth as we can – for the people who enjoy the album and the ideas it contains.

CN – Wallowing clearly deals with a lot of very dark subject material. Do you think there’s capacity for hope in Wallowing, just as a lot of sci-fi is very hopeful?

Zak – I think it depends how you look at it, a lot of the lyrics are about resistance for me and where there is resistance against that darkness there is hope.

Rauri Boyden (bass) – Absolutely. We really don’t want to box ourselves in creatively speaking. A good example is the start of chapter 5 – Vessel, the whole album was so punishing we felt it needed a breath of almost hopeful relief before punching you straight back into the void.

CN – Wallowing clearly has a lot of musical influences. Does the wide scope of sci-fi inspire the diversity of your sound?

Rauri – When we were writing I definitely found inspiration from the scores and foley art for films like Ridley Scott’s Alien, John Carpenter’s The thing, as well as some of the heavy bands I’m into of course. We all have such varied sources of inspiration I’m sure the scope is much wider than just sci-fi.

Tom – I know I personally wanted to sonically create something as epic as the John Williams Star Wars score – big and epic was always the goal. Another influence of mine personally was Jeff Wayne’s “War Of The Worlds” musical album, which absolutely (and strangely) terrified me as a child. I found it told the ‘WOTW’ story in such a rich and dynamic way that it always managed to conjure up some pretty gnarly imagery in my young self’s very vivid imagination.

CN – What is it about the visuals of sci-fi you find so compelling?

R – When it comes to sci-fi I’m blown away by the props, practical effects and set design from the classics I mentioned in the previous question plus 2001:Space Odyssey. There is a tangible interaction between the actors and the set pieces which make it so immersive. This is something I think we try to achieve with the ‘wobbleverse’ and our live shows. It’s definitely an inspiration for the space-tapes which look like Weyland Yutani made them a decade ago and they’ve been kicking around a grubby cargo hold since. Not to mention how dark and forbidding some of the scenes can be, I’m thinking of the claustrophobia conjured by watching space truckers squeezing through small pipes and gangways in a cold, dark and baron environment.

CN – Can you tell me more about your artist, Luke Oram? How did you come to work with him?

Rauiri – Unbeknownst to me before our collaborations I’d seen Luke’s art all over having worked with great bands like Monolithian, Haasts Eagled, Atomçk etc. Tom had contacted him prior to Wallowing being a full band to create the PLANET LOSS cover and our logo too once we were fully formed. The continuation of working with him came out of us wanting to continue building on the themes within Wallowing and to some extent I find his work synonymous with the visual style and universe we’ve created so it made sense to me to keep working with him.

CN – Similarly, how did you come to work with Peter Clark?

Tom – We stumbled across Artist/Toy Maker/Bootlegger ‘Delicious Again Peter’ on Instagram by sheer chance, and after seeing his huge collection of artistically-made retro toy bootlegs, we took a punt at messaging him to potentially work on a small run for ourselves expecting to hear nothing back. We were stoked when he replied and loved the idea. He’s an amazing guy and has been very attentive to detail and sticking true to our themes (creating figures based on our live show) – the whole project really paid off and we managed to make a new friend throughout the process. We hope to keep up a strong relationship with Pete and have his involvement with future projects and ideas – and of course can’t wait to finally get the Art-Figures out into the world.

CN – What does it mean to you to have the Wobbenauts as a figure?

Zak – As someone that grew up collecting action figures and die cast cars and stuff I find it incredibly cool, definite weird proud moment for me.

Rauiri – It blows my mind. I remember a friend having some of the old Kenner Star Wars toys, we were past the age of playing with toys by the time I met him but we both loved Star Wars and I thought they were awesome. We got into going to the local comic store which boasted a plethora of vintage action figures in boxes and I would buy Alien comics. When Tom posted some of Peter’s work to the group chat as a cool idea I was instantly whisked back to those days and was on board.

CN – You’ve worked with a lot of different media. Is there anything you’d like to branch into next?

Tom – We try to leave the door firmly open in regards to our creative output, so the world is truly our oyster here. We have always liked the concept of a gnarly retro style video game (maybe something along the lines of a classic beat ’em up, crossed with Space Invaders) – so that would be something we would love to look into when the time is right.

CN – What would be your dream collaboration?

Tom – I have always liked the idea of a collaborative album – not a split record, but an album wherein two bands work together to create a new sound that boasts the intricacies of both contributing projects (think ‘Curse These Metal Hands – Pijn / Conjurer).

Zak – I’m with Tom on this one, I’d love to collaborate on a big project utilising a greater spectrum of instrumentation. I want a theremin orchestra.

Rauiri – I think Tom and Zak have a more realistic answer but if we’re talking dreams it would be an experience to work with a full orchestral suite.

Jon – I agree with Rauiri that Zak’s theremin orchestra is a realistic answer.

CN – What’s next for Wallowing?

Tom – We have a few more bits in the works for this year. We will be officially releasing our ongoing collaboration with Luke Oram in all its glory in the coming months and have some cool stuff to go alongside that. We are also working on a split record that we are hoping sees the light of day early next year – just in time for us to (hopefully) hit the road for some shows once again.

In this article:Noise, noise music