We’ve already introduced you to HAARM. They had one of the greatest demos of 2015, and they are simply one of the most amazing noise/raw hardcore punk bands around these days. If Cult Ritual or Raw Nerve elected an heir to their wretched throne, that band would be Haarm. Now these crazy fucks have released another chapter in their short but already ruinous legacy in the form of this “F Haus Session,” something so wretched and vile that it will make your gizzards churn. States the band:

The F Haus is a house located in Silverlake, Ca. & is home to various artist/musicians, including Sandor Finta (AKA Andorkappen). Sandor, who over saw the recording aspect of the session & has a history of recording various bands/noise/industrial/metal acts in the F Haus basement. Sandor heard our demo and saw us live a few times & was welcoming to doing a recorded live set after hearing some of the neweer material we’ve been adding to our sets.
Steven from Outlast Records helped make our demo cassette tapes and tossed the idea to us that whatever we have lined up for the future he’d be willing to release it on his label. So the “F Haus Session” and Steven’s interest all came about perfectly. The “F Haus Session” was recorded on a Tuesday evening in late November of last year. The session includes our 4 demo songs as well as 4 newer songs. 8 songs total. 16 minutes. Done in one take, no effects & overdubs.

Well, get this putrid gem here straight from Outlast Records and stream “F Haus Session” below in all its vile glory… and enjoy it as it eats its way through your face…. 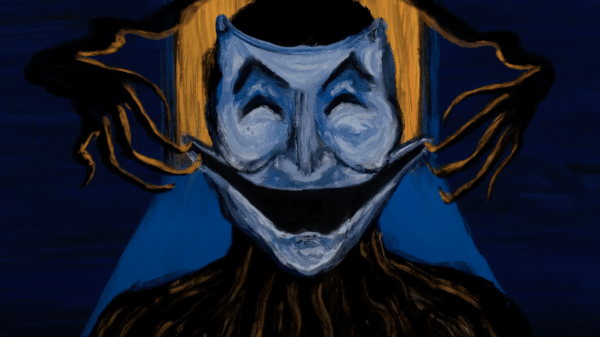 Stop the Chaos in Your Soul With MOP BUCKETS “Happy”

Mop Buckets wants to know, are you happy? Their track “Happy” set to the delightfully disorienting artwork of Eric Allen Livingston might just be...