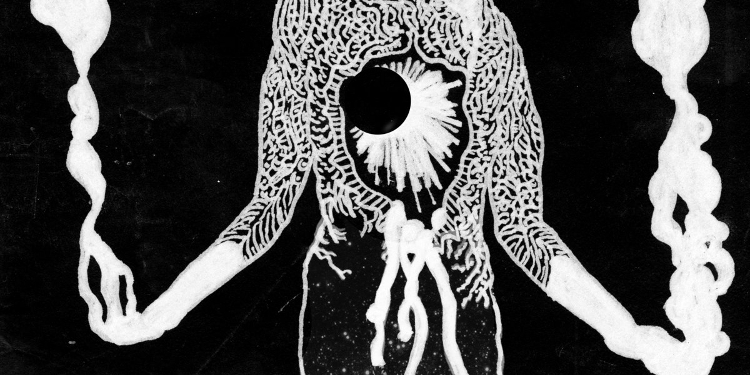 I’ve met Liam from Urzeit in person, and you wouldn’t say that behind such a quiet, humble, and polite person there is some of the most repulsive, lawless, and wretched music spawned from the American underground in recent years. Not only is he the puppetmaster who secretly pulls the strings of the nightmarish abomination known as Urzeit, but he’s also the sole mastermind of equally unbelievable blackened doom one-man monstrosity Mizmor (who’s recent album Yodh has been hailed by many as the best in its genre of 2016), and he also punishes the drum kit and does backing vocals for renowned and completely unfuckwithable sludge-doom behemoths HELL. It seems almost superfluous to further explain the man’s talents, so we’ll leave it at that and dig into the harrowing mindfuck that is his latest album under the Urzeit moniker: the hysterical and shadowtorn abomination known as Anmoksha.

Within Anmoksha you will find some of black metal’s most ancient, wretched, and demoralizing traits: refusal to coexist among the humane and hopeful; total embracement of filth; and an overwhelming morbidity that is palpable in every aspect of the work.  And you will immediately deduce this as soon as your ears are forced against the raw and abrasive production, which is almost completely stripped of a low end and sets the tone immediately. In fact, as opening track “Imnagas” kicks things off, you are instantly assaulted by a swarming and disintegrating storm of high end chaos that feels like a million razorblades passing through your body and slashing your every inch of flesh into a mosaic of blood and indescribable pain. This is where you realize that Urzeit is one of those entities who’s most vehement purpose is to carry on the torch of raw as fuck bands like Iljarn, Von, and Bone Awl, injecting into the listener’s mind harrowing visions of delirium, uncleanliness, and of a disgust otherwise impossible to fathom. Urzeit’s black metal feels completely hysterical and uncontrolled, driven by a frenetic, unshackled, and ominously sinister songwriting – an approach that has yielded songs which are insatiable in their quest for constant and unquenchable filth. While the feel and mood of the songs is definitely “punky” – as is in the tradition of raw black metal – you will, however, notice something different about Urzeit’s approach to the style, and that is the song lengths. Some of these songs stretch far beyond the six minute mark, incarnating in vast and castigating compositions that take the listener into unthinkable places – into hidden and faraway realms where you are crushed by a suffocating and demented darkness. While being raw and extremely primitive, this music isn’t without atmospheres…. quite the opposite. The riffs often become circular and cyclical assuming trance-like traits. Repetitiveness and a refusal to open up create a befounding effect which confuses and derails the listener, crushing them…

This has been the first black metal record in ages which has given me an authentic old school flashback. When I was young and discovering metal, it was still the 90’s and early 00’s. Back then, when exposed to black metal, you’d end up listening to records by Dark Funeral, Mayhem, Burzum and Marduk. I had the same estranging and alienating effects I had back then when listening to Anmoksha. I received a lethal dose of disgust, of anti-musicality, and of emotional coldness. The pleasure in absorbing such a record came more from a sense of unfamiliar hermetism and withdrawal the album carries with it than by an actual “musical” effect. Not many black metal artists these days make albums like these anymore. Liam’s is a strongly dedicated and almost puritan adherence to an ancient and often forgotten cause that demands to be commended, and which shows this astonishing musician dig deep into the most obscure realms of tradition to uncover that ancient and lost flame which still flickers somewhere, lost within the darkest and murkiest bowels of hades, and of our most crooked nightmares. Get Anmoksha tapes and LPs from the band.