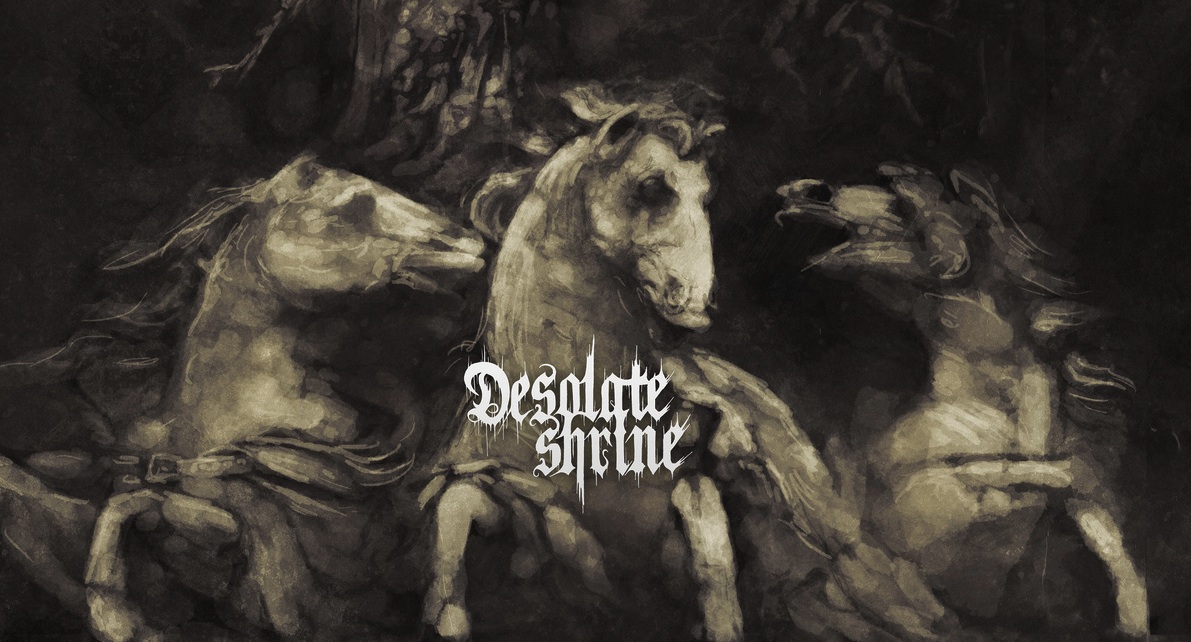 Tenebrous Towers helped put Desolate Shrine on the map, the band getting signed by underground force five tornado of underground labels Dark Descent Records for its next two releases. This is no coincidence, no oversight of Dark Descent Records boss Matt Calvert, as Desolate Shrine continue to be a reliable source of dark ancient death metal. A few years after the release of The Sanctum of Human Darkness, the band is back with more darkness than ever with much-hyped The Heart of the Netherworld, twisting necks and splattering craniums since early this January. A month since its release, its time for CVLT Nation to weigh in on one of 2015’s most awaited albums, Desolate Shrine’s third.

It’s not Tenebrous Towers, but then the notion that anyone should expect them to do another album of the same ilk is quite ridiculous. It’s quite impossible for most bands to top their seminal release, but Desolate Shrine don’t wilt in the least bit on The Heart of the Netherworld. Consider the new release to be an evolution of the band’s sound, not another attempt at the same template used for Tenebrous… After some fans balked at The Sanctum… Desolate Shrine return with a vengeance on The Heart…, coming back with epic songwriting and suffocating atmosphere, on what is easily an improvement over The Sanctum…

They do use more atmosphere than groovy riffs. A single powerchord downpick sends the walls shaking. When the band pick up the pace, they do so for stretches that keep things interesting. The tempos change and there are more doomy sections than in Tenebrous… but the strategy here is quite effective. Songwriting is better here, as the lyrics tend to follow the rhythm in a way that suggests strong song structure. A guy doesn’t just growl and scream with no flow. Desolate Shrine write good songs, songs that drown, suffocate and strangle the listener with great success.

There’s some serious use of double-kick drums, and nice blasts. No grooves really and no solos still, but we like Desolate Shrine just as they are, especially on The Heart… they take you to the Nethers and back before the album closer features some interesting acoustic guitar.

Don’t expect much different from Desolate Shrine with The Heart of the Netherworld. Do expect strong songwriting, dark atmosphere and subtle but powerful riffs and tempo changes. Do not expect thrash riffs, rock guitar solos or prog tendencies. Desolate Shrine may reinvent themselves ever-so-slightly with subtle dynamics, and better chord progressions, but they still play dark death metal any Desolate Shrine fan will truly like.

Play this in a dark room in the house. Choose the creepy basement where no one’s been for some time. Board up the windows and crawl into the filthy sheets of a soiled mattress somewhere in a dark, dank corner, and practically let this album drive your mind into the deepest recesses of your imagination.

Or just give this an old-fashioned listen and admire how well Desolate Shrine craft perfect rituals. The vocalist has good range, growling low and rasping high to great effect. The drums stay home, and the guitars stay in orbit. The result? Some blasting and downpicking makes enough g-force to change the gravitational pull of the earth, where Desolate Shrine lead us into a black hole in the universe.

This is absolutely great stuff, fiends. A worthwhile listen and worthwhile addition to Desolate Shrine’s discography. After The Sanctum… failed to stir the waters of Phlegeton, Desolate Shrine return with an album to properly succeed Tenebrous Towers. Support another landmark Dark Descent Records release.

In this article:atmospheric death metal, Dark Descent Records, Desolate Shrine, review, The Heart of the Netherworld