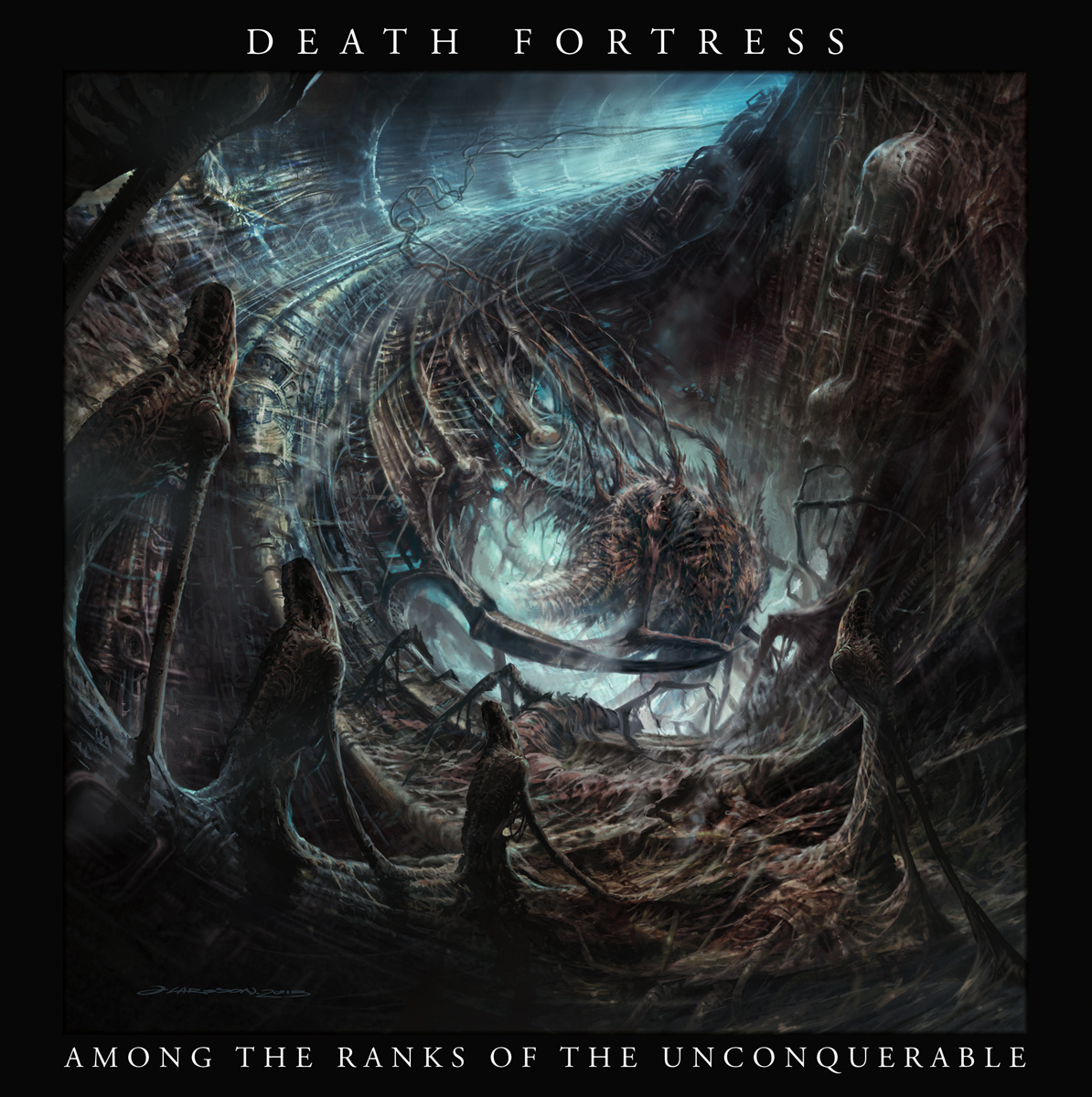 The album cover for Among the Ranks of the Unconquerable is a visual description as to what you are in for with this Death Fortress album, the very skeletal surroundings signifying that death metal is about to be afoot. This is most straight up metal album I’ve heard from Fallen Empire Records yet. These guys are not messing around with the ambiance, giving this an almost blackened death metal feel. This three piece from New Jersey kicks up a pretty massive sound. The production on the drums sounds like they are from a 90’s thrash metal album. They do create of more a sonic whirl wind than death metal does, so the black metal tag for these guys is by no means unfounded, with track “Arrogant Force” possessing an almost power metal-like authority to it’-s gallop.

The vocals feel like an afterthought most of the time, and the lower, more dismal growls sound the best. The higher rasp reminds me of Inquisition, but with significantly less croaking. This takes the lyrical content out of the equation, the only part of the lyrics to “Forced Arrogance” that I understood was there is something about humiliation going on. Sounds a little kinky for this kind of death metal, but to each their own. The blaze of double bass on “Fifth Season” gives way to more of a gallop, but not in the Iron Maiden sense. These guys keep things a pretty opaque blur of blast beats, breaking this only to ride out on a very powerful half time riff that captures the majesty of metal in a manner Moonsorrow would be proud of. The more they slow down to lavish you in it’s heaviness, the better. The no frills death metal of the title track is still filled with enough interesting punches to accent the beat down being thrown on your ears. Lacing the brutality with songwriting, there is still enough from them for a melodic chord progression to build up into something more soaring. The title track also boasts the first solo that makes you take notice, despite being pretty standard pseudo-shredding.”Pride of the Enslaver”…more s&m themes… is another meat and potatoes take on death metal. Maybe it’s the whole Jersey thing that keeps these guys from committing to being as grim as possible. Most of their catchiest riffs are played so fast they blow right by, until you take notice the second time it comes around.

The album closes with the speed race of “Ancestor’s Call”. The lower, more pungent vocals serve this song better than the raspier ones. The raspy vocals are on a similar frequency as the guitars and just get lost in the wall of sound. The slower, more powerfully accented riff midway into the song helps set up another melodic excursion. They show a great deal of restraint compared to the rest of the album and allow this section to flow unhampered by the need for speed. This reminds me in many ways of back in late 80’s when bands like Unleashed blurred the lines between black metal and death metal. It is more textured with dissonance than death metal – we can argue until 2015 as to if this is black metal – and it’s different than what you might expect from Fallen Empire, but is still quality metal.