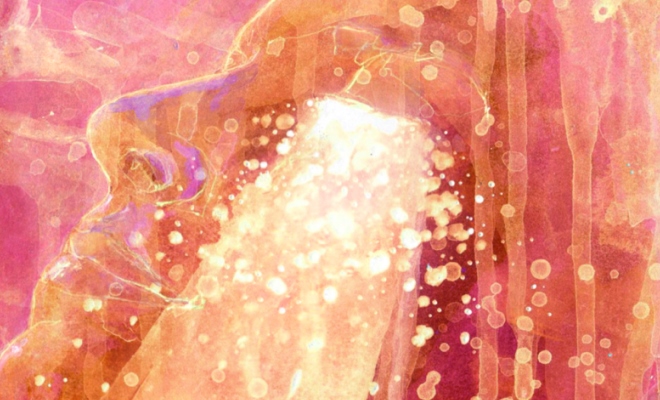 Markus Siegenhort, sometimes going by the pseudonym of Herbst, is the helmsman of German act Lantlôs, a band that has traversed different musical plains over each of its records, usually occupying a regular home in the world of black metal and shoegaze with regular collaborator, Neige of Alcest.

With new album Melting Sun, Markus has made some changes. He has taken on all vocal duties, departed from black metal terrain and ceased working with Neige.

“He’s just very busy with Alcest and we kind of changed in sound. Since he is living in Paris and we are in Germany, we didn’t really rehearse or make music together,” says Markus. “Also in the past I was doing pre-productions and sending them over via the internet and he was then doing the vocals. For the pre-productions for Melting Sun, I felt it was something different, I felt like we needed change and also since we were playing live without him, I just jumped in so to speak for doing live vocals and so I started experimenting with my voice and I grew more confident with my voice.”

“I wrote him that I decided to take over the vocals and that I like him but I don’t feel like it makes sense anymore to work together. So long story short, he’s lacking time and we changed in sound.”

Melting Sun marks a big change for Lantlôs, taking a drastic step away from the hallmarks of black metal, much like Alcest in fact, though Markus retained a grit and heft along with the exuberant melody that runs throughout this record. Make no mistake, Melting Sun is still a metal album.

What spurred this change though? As Markus explains, it wasn’t as simple as just becoming disinterested with black metal but rather overcoming issues that have plagued him for years. “When I was young I had this weird thing called derealisation and it makes you feel like your surroundings are in a very weird and distant way. It feels like… did you ever smoke a joint? Did you ever have a panic attack from it?” he says on trying to describe this feeling that would eventually be an influence on the more aggressive and angular sound of early Lantlôs.

“I got these weird panic attacks,” explains Markus, “that makes you feel everything in this weird and almost robotic way, like you can’t relate to anything.

“It’s really hard to describe, you walk on different soil and you always have this shortly-before-a-panic-attack feel. The first Lantlôs albums were all about this and I worked hard on this and don’t have this anymore.” So with an understanding of the change in his personal life, it doesn’t seem so strange now that Melting Sun sounds different and so much more vibrant but what about the actual music itself?

“During the past four years, I didn’t really feel so connected with black metal. I started listening to different kinds of music,” says Markus. “Black metal got more and more… to the background, or metal even in general. This is why I guess it sounds a little bit different.”

These changes manifest themselves in the altogether cleaner, more melodic tone of Melting Sun, led primarily by Markus’ all-clean vocals but he insists that the core Lantlôs sound is still there and this has been a natural path for him.

“I feel like that it’s still a metal album and I feel like there have been songs on the [last] album Agape, which are pointing into the Melting Sun direction and I also feel that all the Lantlôs albums have a change in sound,” he says.

“I think I have my handwriting in terms of melodies,” explains Markus on what has remained at the core of Lantlos. “I think you can hear that when you listen carefully, it’s the same guy writing the music and I also think there’s a lot of metal influences of course still on the album. For me, it’s definitely not a post rock album. A lot of people say that. It has a lot of rhythm sections with the guitars, some heavy drumming and also some doom and sludgy influences.” Lyrically speaking, the album doesn’t actually have any rigid themes but as Markus explains, Melting Sun is more of a sonic representation of the brilliant colours and images the music conjured. “The lyrics are actually just images,” he says. “I didn’t actually think of any logical, coherent lyrics. It’s just stuff I came up with when I listened to the pre-productions.

“Actually a lot of the inspiration for the album came when I walk with my dog in the mornings. I got these flashes from [the pre-productions], these very ethereal, sunny, honey-like flashes and just words popped up and I just wrote them down. When I got the feel of the album, I just picked up my mobile and wrote it down.”

These images are also reflected in the gorgeous artwork, and the great vistas that Markus describes are easily replicated for the listener almost immediately with tracks like album opener ‘Melting Sun I: Azure Chimes’ with its dense rhythms and glistening lead guitars.

The departure of Neige and the stylistic shifts aren’t the only changes that came about in the Lantlôs camp since Agape was released in 2011. They’ve since grown into a full line-up with live shows on the horizon. The band is still very much directed by Markus, who in his own words still wrote 95% of the riffs but now he has old friends by his side.

“Those are all good friends of mine, which is very important to me because I just like to work with friends. It makes a lot of things easier,” he says. These friends, Cedric Holler (guitars), Felix Wylezik (drums), Chris Schattka (bass), and Julian Wulfheide (guitars), have worked with Markus in some shape or form over the last few years in older bands like Herbst, LowCityRain, and Lìam.

“With the recording, not everyone was participating but with Cedric, he took care of recording stuff, microphones, preamps and all that kind of stuff,” adds Markus. “Felix, the drummer, actually participated a lot during the production.”

Not only does Markus have a full line-up to bring his Lantlôs vision to new life on record, they’ll soon be embarking on their first tour of Europe kicking off in September. “We’re trying to make this our year for playing live. It’s our first tour, we didn’t play so much before. We’re really curious for what will happen and to see the world with our band.”