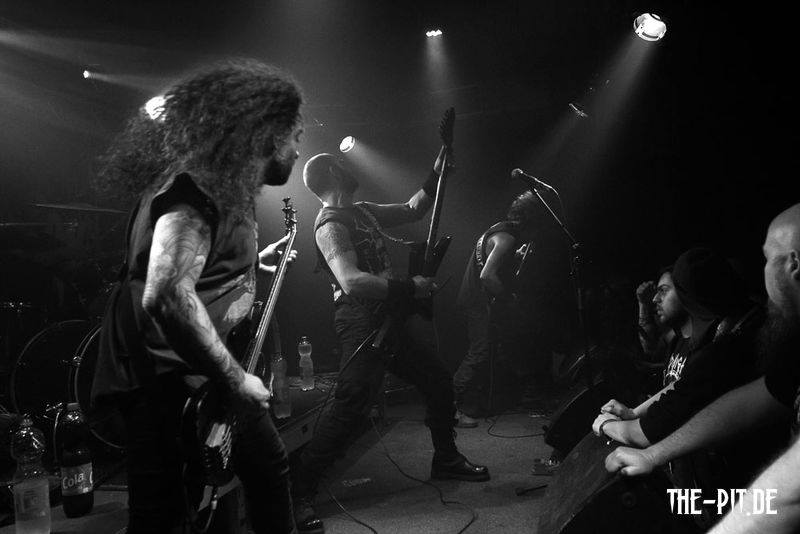 Hey guys! First of all thanks for finding the time to do this interview! It is much appreciated! Would you like to introduce the band and tell us how Dead Congregation came to be?

Dead Congregation was formed in 2004 by V.V. on drums, T.K. on guitars and myself, A.V., on guitars and vocals. V.V. and I have been previously involved in Nuclear Winter and together we recorded the Abomination Virginborn demo in 2003. As soon as we started working on new songs and ideas, it was clear that we needed to form a new band, as Nuclear Winter was never my brainchild, and thus I needed to distance myself from anything with which I couldn’t relate to 100% musically, aesthetically or ideologically. We’d been friends with T.K. already, we knew he was a competent guitarist, and after all three of us rehearsed together for the first time, it was more than obvious that the line-up was complete. Soon after the first songs were ready, we were so confident in our material that we didn’t even record a demo, instead we went in the studio and recorded 5 songs that became our debut EP, Purifying Consecrated Ground. Your latest album, Promulgation of the Fall, was released through Profound Lore Records. How did you decide to go with that label and can you tell us how has it been working with them so far?
Promulgation of the Fall is released by our own label, Martyrdoom Productions, and it’s licensed to Profound Lore only for American territories. We had offers from a lot of labels, pretty much all of the big ones, but we decided to remain independent as we didn’t feel comfortable selling the rights to our own material and not having full control over our album. So we released it ourselves and licensed it to Profound Lore to make things easier for us with worldwide distribution. Chris Bruni is a dedicated individual; he’s been a Dead Congregation fan since the beginning and Profound Lore is not a label that releases whatever crap one can imagine. It’s not a coincidence that a lot of the albums that PFL released this year ended up on many ‘top albums of 2014’ lists – such as Pallbearer, Yob, Impetuous Ritual and more. It’s not like those bands are relevant to Dead Congregation, but it shows that the label has an eye (or ear) for quality, and that’s definitely a better spot for us than being with a label that would sign us simply because we sell a lot.
Finally, we should add that the LP version is licensed to Norma Evangelium Diaboli, another label that values quality over quantity and is responsible for releasing all the Black Metal jewels of the early 2000’s, like Katharsis, early Watain, Deathspell Omega, Funeral Mist, Antaeus and more recently Teitanblood.

How would you compare Promulgation of the Fall to your earlier albums? How do you feel that your music has evolved throughout the years?
I think Promulgation is more direct than Graves of the Archangels; it is more aggressive – the fast parts are faster, the slow parts are doomier and as a whole it flows more naturally, despite of the songs’ unorthodox arrangements. When I listen to Promulgation of the Fall, it seems like it is your strongest and most complete release to date. How long did it take to get the songs together and how did the creative process work for the album? Do you tend to work individually when writing a new album or is it more of a collaboration?
The songs come together fast as long as there’s inspiration. Basically, I write all the music and then I show the songs to the rest of the band, we rehearse them and sometimes we need to change a part or two, sometimes everything comes together effortlessly. T.K. writes most of the lyrics, which we arrange over the music once a song is completed. So in a way, we make sure that the songs work perfectly as instrumentals and then we add vocals wherever it feels appropriate. Vocals should contribute towards the overall atmosphere and shouldn’t be the focal point of a song. Same with lead guitars.

A few months after the album’s release, what has been the feedback you received in general? Are you happy with the album’s reception and is there anything you would change in Promulgation of the Fall?
The album has received really good feedback, great reviews and it’s also been voted as album of the year on many lists, including Voices From The Darkside, which is an independent zine since the 80ies. It’s great to see that the album got so much attention, even without proper promotion or PR agencies or managements to back it up. I mean, it’s very satisfactory to know that the press is praising your album because they genuinely like it, and not because someone paid a lot of money for advertisements on their mags or website.
That said, we wouldn’t change anything on the album even if the album wasn’t too well received. This is how WE wanted to album to come out and this is what’s most important. Can you give us some insight on the production of the album? Where did you record Promulgation of the Fall and which engineer(s) did you use?
We recorded it at a local studio called ‘Studio Feedback,’ which I was already been familiar with from recording there with Embrace Of Thorns a few years ago. The sound engineer is very capable and co-operative – he knows how to get what you want and he’s also willing to follow the band’s wishes without trying to force his opinion on the album’s production. We wanted the album to sound very close to how we sound in our rehearsal room, heavy and powerful and raw and alive. So we moved all our gear into the studio and recorded pretty much live; the rhythm guitar tracks and drum tracks don’t even have equalizers – we just made sure to record really good raw sources and then adjusted levels and played with microphone placements to get a good mix.
Can you delve more into the concept and lyrical themes of Promulgation of the Fall? What ideas are you trying to convey to the listener?
The main concept is about the decline of the Christian religion. We never wanted to be too philosophical with our lyrics, so we always left them open to interpretation, but the themes flirt with decadence, death, darkness, despair… Cliché for Death Metal of course, but this is what comes naturally for us to write about, so it would be pretentious of us if we tried to write something more original. Most of the times the lyrics are (figuratively) trying to paint a surreal picture quite similarly to HP Lovecraft’s way of writing, though our lyrics do not deal with the Cthulhu Mythos or with fictional themes. The album artwork for Promulgation of the Fall is amazing, and very fitting for your music! Which artist did you use for it? Did you have a specific concept in mind for the artwork or did you give the artist free reign over it?
Thank you very much. We didn’t want to work with an artist that’s worked with too many bands in the scene so for this time we decided not to go with our friend T. Ketola, who’s been responsible for the artwork on our past releases. This time we chose a local friend of our drummer named Ayis Lertas. He approached us and asked if he can have a take on doing the artwork, we gave him some basic instructions, the album title, some lyrics and demo songs. So we did have a specific concept indeed, but as we didn’t want to emasculate him artistically, we told him to approach the concept as he saw fit. His first draft was so good that we didn’t need to look further; he completely captured what we were looking for, which was an abstract piece that reeks of decadence, pretty similar to old Slayer covers done by Larry Carroll. Then another local artist who’s a professional Byzantine Iconographer also wanted to contribute, so he did the titles in Byzantine fonts, hand-painted in the traditional way with vinegar and egg-based paint. Both artists also contributed some illustrations for the inner pages of the booklet. We’re really pleased with the overall result. I know it is quite soon to ask, but are there plans for any more Dead Congregation releases in the future? Do not get me wrong , I cannot get enough of the last album, but do you have any plans for EPs or split releases? That split with Hatespawn was fucking brutal!
It IS a bit too soon to ask…
Do you have any gigs coming up?
We will play on quite a few festivals, some big, some small (which we’ll headline)… We have more offers than we can handle, but we do try to play as much as possible, provided that the offers are interesting enough for us. There will be more shows booked soon for sure, so far this is what it looks like…
Upcoming DEAD CONGREGATION shows:
14-03-15 Armageddon Descends Fest, LITHUANIA
18-04-15 Neurotic Deathfest, HOLLAND
16-05-15 Steelfest Open Air, FINLAND
07-08-15 Brutal Assault Fest, CZECH REPUBLIC
26-09-15 Brixia Death Fest, ITALY
10-10-15 Old Grave Fest, ROMANIA
??/??/15 t.b.a. Athens, GREECE
31-10-15 Fires of Samhain Fest, IRELAND
07-11-15 Hammer Fest, SPAIN

There’s also talk about a South American tour in the summer, but it seems like an ambitious plan so I don’t have high hopes at this point.

Are there any bands you have recently discovered that you would like to share with us? They do not need to be new bands…

Hm, ‘recently’ is a bit relevant… Some bands/albums from the last 5 years or so: Pallbearer, Head Of The Demon, Lvcifyre ‘svn eater’, Vanhelgd ‘relics of sulphur salvation’, Capilla Ardiente ‘bravery, truth…’, Ataraxy ‘revelations of the ethereal’, Skeletal Remains ‘beyond the flesh’, Atomic Aggressor ‘sights of suffering’, Power Trip ‘manifest decimation’. Definitely Pissgrave from Philadelphia as well, who we toured with on the East Coast in 2014, they don’t have an album out yet but their material is insane, can’t wait for an album.
Alright guys! Thank you again for finding the time to answer my questions! All the best to you and hopefully I will see you playing live soon!

Thank you as well, we hope to be in the US soon, too!