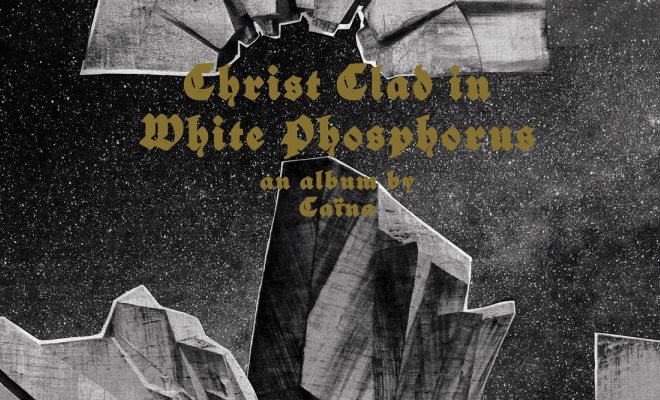 Despite the consistently churning waves of eclecticism and experimentation that has surrounded Caïna since the project’s inception in 2004, the rich sense of focus and introspection carved from the hands of mastermind Andrew Curtis-Brignell has rarely failed to galvanise the metal underground in a staunch show of support and acclaim.

While the project has gone from strength to strength, Curtis-Brignell’s one-man mission and often-experimental tangents have made Caïna a difficult beast to fathom at times, with each subsequent release as unpredictable as it is creatively unconstrained. With 2014’s Setter of Unseen Snares came a turning point for the project – the production reigns were handed over to an outsider for the first time ever and the shift was made from a solitary creative vision to a more band-oriented approach (with Cold Fell’s Laurence Taylor taking over full-time vocal duties); yet despite the career high-point that Setter… brought with it, the fate of the project suddenly became very much up in the air as Curtis-Brignell pondered his future.

If the new beginnings heralded by Caïna’s new line-up (now completed by bassist Paul Robertson) do indeed quash the death knell that hung over Curtis-Brignell’s prodigal child less than two years ago, the arrival of Christ Clad in White Phosphorus banishes such thoughts to beyond the gates, never to return – it’s an album brimming with confidence, alluring ideas and experimental flair that punishes and intrigues in equal measures.

Once again the shift in sound is palpable, with the warm yet often desolate feel of Setter… making way for a decidedly colder, industrial quality. The project remains very much enveloped in black metal, yet the desire to progress is as clear as it always has been, and having previously stated his intentions to refrain from repeating himself creatively, this is once again a welcome aspect to Andrew’s approach to songwriting.

At once more feral than ever before and yet at the same time more restrained, the ruthless snarl of ‘Entartete Kunst’ is complemented by the Godflesh-style industrial pound of ‘Gazing on the Quantum Megalith,’ while the synths that adorn ‘Fumes of God’ create an expansive, contemplative atmosphere – the likes of which make sporadic appearances throughout the album. One unexpected entity here is the profusion of instrumental, ambient pieces that span almost half of the album’s running time. Far from being senseless filler material, however, the cold, mechanical minimalism is the cement within the wall, linking the songs and augmenting the overall sensation that Christ… constructs. The pinnacle of this comes in the form of ‘Extraordinary Grace,’ a twelve-minute voyage of transcendental ambience that envelops with its otherworldly character.

The interwoven yet distinctly disparate stylistic tendencies that would derail many a band once again become a showcase for Caïna’s focus and creative vision. Christ Clad in White Phosphorus contains some of the most boldly introspective, experimental music you’ll hear this year, as well as some of the most vicious black metal you’re likely to hear outside of Norway. The smattering of ideas on display here dot the album intermittently and yet while this gives off the impression of an unfinished canvas, it flows well enough to avoid sounding disjointed. With such raw, creative talent at the helm and a full band line-up to support Andrew Curtis-Brignell, Caïna could well have set in motion something very special indeed.