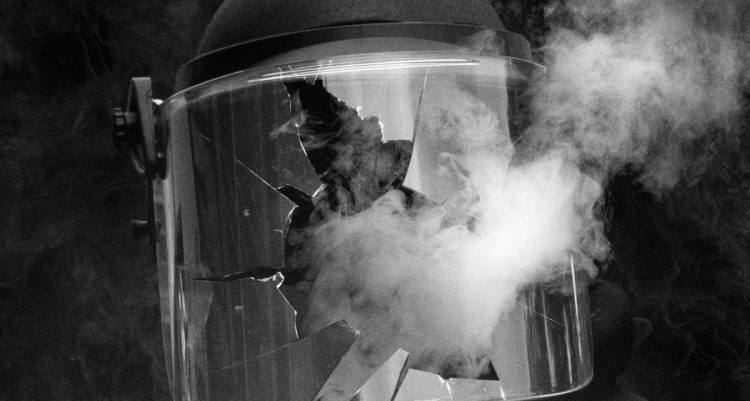 Background is everything. Behind all great art lies a beating heart, a fractured rhythm, and a story. Beneath the pummelling powerviolence and grizzled sludge of Regional Justice Center’s World Of Inconvenience sits a 12 minute treatise on the myriad ways the justice system continues to fail and marginalize those crossing it’s thresholds. Ian Shelton, the braintrust at the center of RJC’s vicious takedown of the Prison-Industrial Complex, is informed by and in response to circumstance. The album finds him grappling with his brother Max’s incarceration and, lest I tell the tale of another, it hits me in the deepest of places. It’s an uncomfortable listen, perhaps due to the fact that it’s confrontational, combative nature is authentic. Having lost my brother a couple of years back, I’ve had access to seeing how both the revived “War On Drugs” and the justice system is a failure of such grotesque magnitude that it demands disassemblage. We’ve learned nothing, and the disease of addiction and it’s subsequent life of violence continues its indiscriminate rampage. World Of Inconvenience puts words to dark sentiments in a way that’s eluded me. To produce something this pure is a towering monument to both his brother’s story and, unfortunately, the story of countless others. Musically, World Of Inconvenience is fastcore done at the highest of standards. Leaning far more on the punk side of powerviolence, I hear elements of everything from Black Army Jacket, Crossed Out, Charles Bronson,  and Coke Bust. Somewhere in their practice space lies a thumbed-through Slap-A-Ham catalog. All of the trappings of classic powerviolence and frenzied hardcore are here in spades: grindcore runtimes, lighting fast hardcore interspersed with demonically heavy lurching passages and the requisite blown out bass tone. Blastbeats abound, but the record transcends when it slows into truly unsettling sludge. It’s in these moments that we often hear little more than Shelton’s venomous vocals which, to this listener’s ears, are the centerpiece. As is often the case in powerviolence, one might over look or ignore lyrical content when being sonically assaulted by such a blitzkrieg. Yet, the sparse and essential words that accompany such anguish and agony are indispensable and what ultimately catapult this album into great art. In an album of standouts, “Amnesia” is littered with brilliant lyrical couplets like “It’s easy when doing bad to forget but having bad done leaves it’s mark” before fading into a barely decipherable inmate phone call from Shelton’s brother. Reviewing something as forceful as this seems almost like critiquing a life story. When touched so closely by gross injustice, family and those close are joined in the experience, co-owners of tragedy. Shelton lays bare the concept on “Exploitation” barking simply, “Happened to you, happened near me, thin line, fixation, take your experience as my own.” We are all adjacent to someone affected, we’ve all inherited the problems. When anyone is pushed to the distant and cruel fringes of society, we are all culpable and responsible for advocacy. Shelton and Regional Justice Center are far than just a powerviolence band. They’re an institution to challenge institution. As heady and direct as the album is thematically, it’s most intriguing aspect is when it addresses the frontier of what comes next. The “after” is oftentimes the most difficult part of incarceration. Recidivism rates aside, there’s a branding that inmates must face that, upon release, is responsible for perpetuating a cycle of stigma, decreased employment opportunities, and abuse. In briefly chatting with Shelton, he proposed the idea of the next release containing lyrics written solely by his brother Max. As visceral as RGJ’s attack already is, just imagine the ferocity were the lyrics penned by the casualty at the core of this LP. It’s near impossible to fathom something more feral and intense. I can’t fucking wait. Much respect to everyone involved and I’d like to extend my best wishes to Max, Ian, and everyone affected by his incarceration.

To pick up “World Of Inconvenience” head to the band’s Bandcamp as well as To Live A Lie Records for the exclusive cassette release.