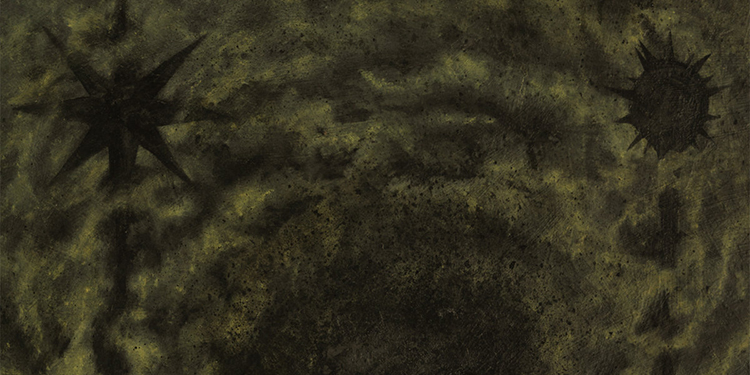 Mesenteric waves in a maelstrom spiraling into the depths of oblivion, Ululatum Tollunt brings Mitochondrion-like swirling death metal into their latest mini-album Quantum Noose of Usurpation, via Invictus Productions.

This is a fancy way of saying that once you hit play, the music swirls into circular riff-driven armageddon sending you straight into the five fathoms without hope of survival. Similar also to Deiphago’s Satan Alpha Omega album, Quantum Noose of Usurpation is brutal and intense. The riffs are downtuned excessively and the lead sections sound dissonant and anti technical. Quantum Noose of Usurpation has six short tracks of steady spiraling chaos that is sure to entertain fans of this rare death metal style. So rare, the phenomenon has not been christened a name worthy enough to describe without a foray into a funnel cloud to experience just what inspires this style of death metal juggernaut. Dare I say, groove meets blastbeats and insane downpick and uppick intermittence provokes the slippage of tongue-wagging intellectualism the likes of which has not graced the minds of many a metal fan. Death metal art? Swirling black/death metal maestrom? All hail Ululatum Tollunt. All hail Quantum Noose of Usurpation! We need more of this.

There is a use of groove, loud cymbal crashing, fast downpicks and uppicks, and chord transitions barely registering in the lower strings, notes rooted on the fifth and sixth strings almost exclusively. The riffs are heavy and the wall of sound seems to suggest that more than one guitar plays at one instance while recording. Take a trip to a hurricane close to the eye of the disturbance, and turbulence is hardly a fitting word to describe the experience. Better yet, take Ululatum Tollunt’s Quantum Noose of Usurpation along for the car ride while speeding and spinning out on ice-covered interstate roads to fancy the swirling riffs on record. Spinning guitar-driven vertigo mars the listener intent on a listen with the volume turned up absurdly. So vividly, black holes venturing into the Milky Way with the gravitational pull of dying stars will devour planet earth with a slay of the play button. Imagine the sludge and grime of a quicksand swirling at a thousand revs per second and that experience will properly acquaint you with the dense wall of sound made by guitars during the blast sections in Quantum Noose of Usurpation. A heady caveat must be given the daring listener of this dire prophecy of worldly peril. Tread carefully. Ever since hearing their demo Consecration of the Temple, I have been a huge fan of QRIXKUOR. Now I’m counting down the days before...