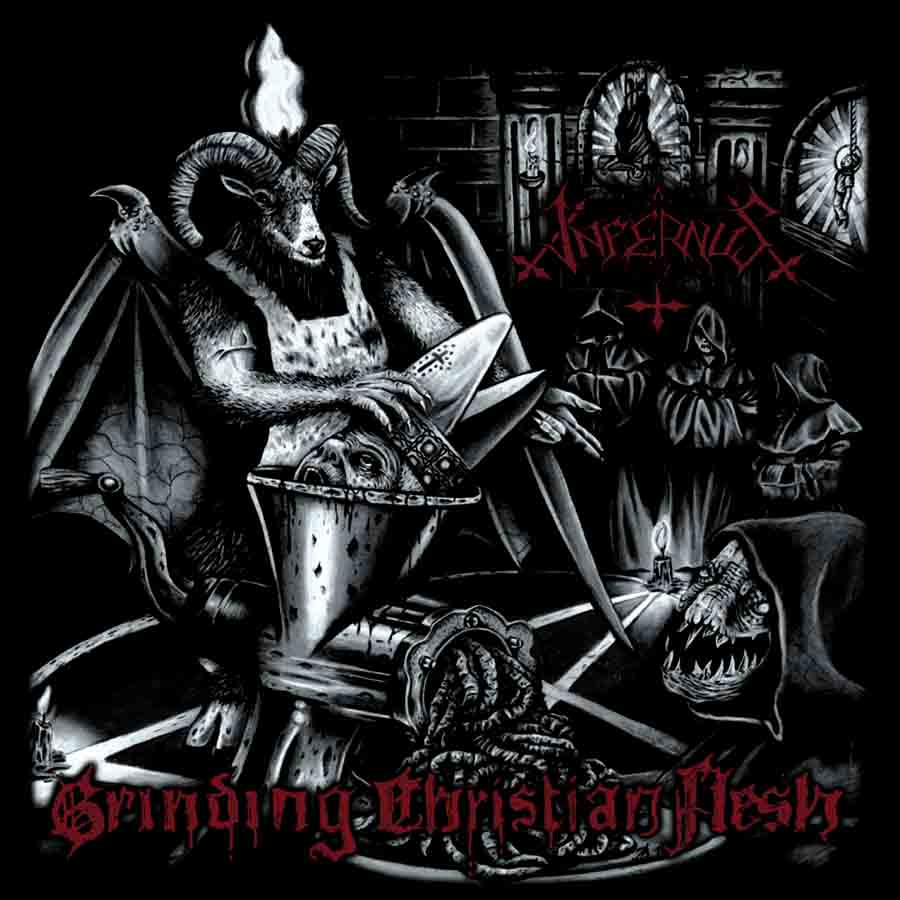 Infernus is a unit made of scene veterans. But, their latest release, Grinding Christian Flesh, is only their second full-length album, the first for Moribund Records. Moribund doesn’t swing and miss on this record, as I find that some of their past releases have. Infernus combine melodic black metal with strong helpings of thrash. The band doesn’t play dissonance a’la Skaphe. They’re a bit more old-fashioned, using melodic black metal to glue the moshpit-moving thrash sections to good results.

The band plays catchy riffs, which are never boring. Grinding Christian Flesh stands up well during repeat listens. The songs never bog down, being mostly comprised of get-up and go moshers. This is good news, considering the trend for mini-albums. Bands are wary of producing full-length albums’ worth of material and instead release only their best. Infernus’ Grinding Christian Flesh is certainly a full-album length, and there’s an intro and acoustic guitar interlude in the album, but neither intro nor interlude will irritate the listener. Both tracks are mercifully short, and Infernus love to rouse some headbanging with most of their songs.

The album, as mentioned, starts with a sampled intro, and then unleashes a brutal death metal-like opening salvo that transitions to more conventional tremolo-riffing. Just some time later, the thrash riff gets going and the album properly kicks off some of Infernus’ best material released thus far. The leads are also commendable, combining screeches with quality soloing. A careful listen might reveal that the band start off with their weakest track following the intro, but once the song hits thrash mode, it neither validates this suspicion nor does it change it entirely, perhaps preparing the listener for the ensuing onslaught.

Grinding Christian Flesh won’t please the avant-garde, noise-infused, experimental black metal fan, but considering how many albums with Infernus’ style have this level of quality, this album will be a gem for most fans who are into Dissection and Destroyer 666. These guys play their instruments well and there’s not much sloppiness on the record.