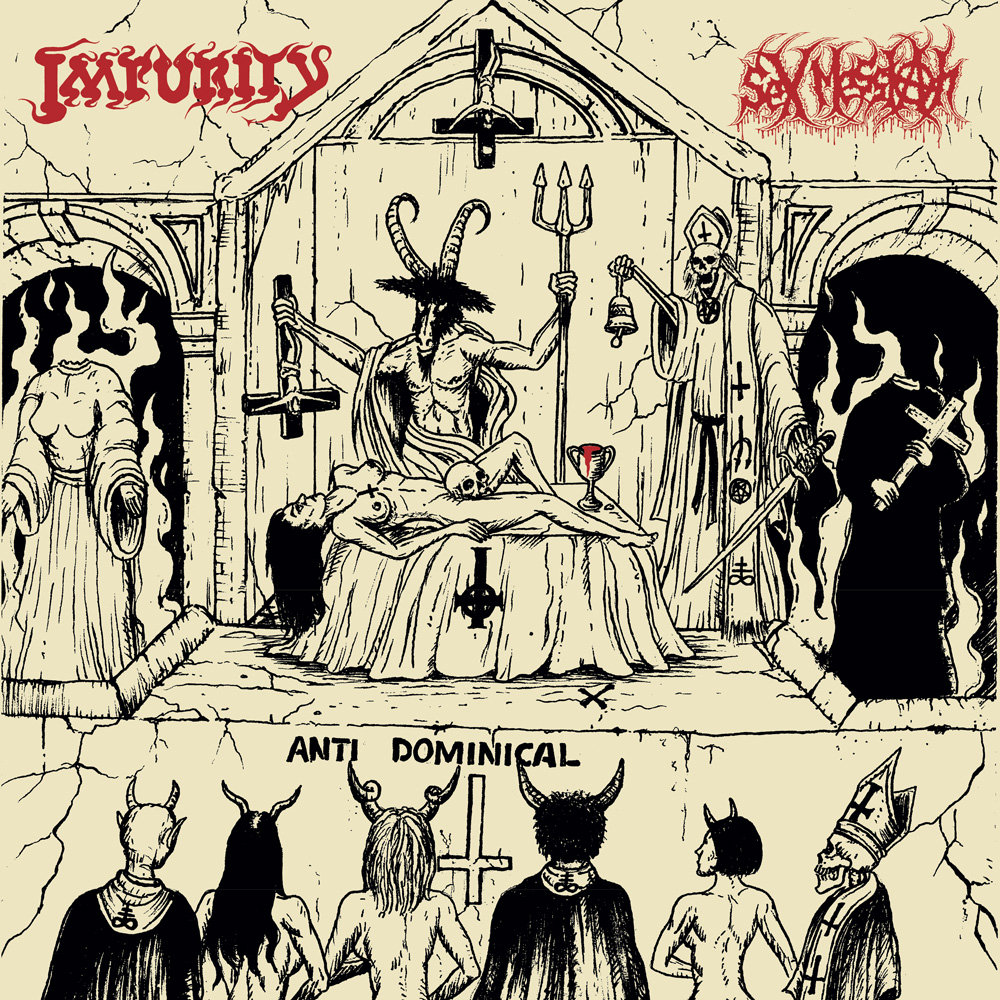 Impurity, from Brazil, have a long decorated history in underground black metal bestiality. They have released many full-length albums distro-lovers clamor for and enjoy. This split, entitled Vomiting Blasphemies All Over The World, with Japan’s black/thrash purveyors Sex Messiah comes to us via Nuclear War Now! Productions, whom we all know and love at Cvlt Nation Headquarters.

Black metal need not have feathery wings strummed from light razor-sharp tremolo riffing. Impurity show a death metal burgeoning weight to their approach, utilizing heavy drum kit sound engineering that lends their material an organic sound. Like they’re live in the studio during a take, they obliterate audiences worldwide in tribute to phlegethon. Barbarity has a new name. Cvlt lovers all over the world are down.

This split release is an LP split, not an EP Split. Impurity are given three songs worth of material to schellac your brains to mush, and they rightfully do so. The thrash drumming is so heavy on snare hits, the drummer’s hands should be registered as deadly weapons. They barely go blastbeat, but the thrash pace is so whiplash-inducing that you don’t mind the absence of blasts in the least.
Track two, “Anti-Dominical,” starts off like a banger, then melts your face as the drums hit thrash pace. All three tracks by Impurity hit like solid winners. It is a welcome resurgence for the band after their release, Into The Ritual Chamber, decimated underground circles. Sex Messiah contribute the next four tracks on Vomiting Blasphemies All Over The World. The unit from Osaka, Japan, are no less intense. They feature a heavier guitar tone on their half of the split, frequently using the sixth and fifth string-rooted notes to add guitar bombast to their attack. The drums blast and stop, slowing down to let loose gargantuan chord transitions that allow for some cranial hemorrhage the likes of which is rarely seen during car accidents, all from ferocious neck-snapping headbanging cvlt bangers and weekend warriors.

Track four, “Maniac Lust,” starts off with hoarse whispers and keyboards before the band launch into full black metal salvo. The blasts set the pace and the guitars sound like a live take in the studio. The vocals are screechy and reminiscent of early second wave black metal.

Track six, “Vampire,” slows it down. This does sound heavier on the black metal elements. I don’t hear a great deal of hyperventilating thrash riffs, but the band play black metal parts underground music lovers will adore.

Track seven, “Eternal Winter,” features a mid-tempo attack with a cool main riff. The band slow down and speed up to add nuance. There’s some punked-thrash chord sections here at the breakneck tempos. Then, the band mix it up.

Quality music need not be polished to feature more fidelity. Both bands here embody the underground by design – heavy, almost sloppy, slogging, throttling riffs devastating mainstream metal outtakes that sound less-than-inspired. Better than a live album by a big band with a tour bus full of creature comforts, this one-take recording is fine, slightly lo-fi black metal homage. What words can describe the experience of hearing two underground bands battle the mainstream minions can be done no less than with the decimation of entire civilizations. Heavy snare hits, good songs, live-wire guitar tones, and demented vocal rasps all predominate here. Vomiting Blasphemies All Over The World is cvlt indeed. This release is Cvlt Nation approved, one hundred percent guaranteed!