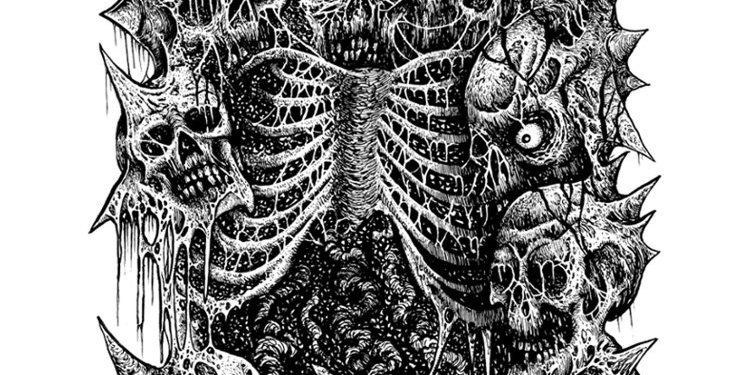 CVLT Nation presents: the latest doom/death album courtesy of Dunkelheit Produktionen – the necro-carnal, brutal, extreme and irrefutable Blasphemous Putrefaction and their latest issue on cassette tape entitled Abominable Premonition.  Gotta love that album title. It means absolutely nothing and everything at once. It sounds like similar death metal albums with pseudo-cryptic names – the type of albums in the nineties we just can’t get enough of.

The guttural growls on this record can’t go any lower, or deeper.  The production doesn’t blunt the drumming, and the fill-ins are actually properly produced on the album, echoing and resonating as though they were played in a theatre hall where the acoustics are good, similar to the way Hellhammer’s fill-ins were recorded on Mayhem’s De Mysteriis album.

Too often, the drums are reduced to thuds on throwback efforts, but not this one.  The drums add to the enjoyment you’ll experience listening to this record, if only for the love of great sound engineering utilized on tom-toms and floor toms.  The guitars just guide the songs to suitable conclusion.  They churn with malice, with grit, with reverb, and are simple and easy to enjoy.  This is a five song cassette tape your mainstream metal loving friends will find too kvlt and obscure.  If your friends love Blasphemous Putrefaction, you’ve just cost Alexi Laiho more fans, and all the better for the world as a result of it. Let’s turn over a new leaf and convert every single mainstreamer to the dark side with Abominable Premonition. It won’t work, I’m certain, but hell we can try.

Or to hell with them if we can’t help it. CVLT Nation will feature the few, the proud, the most bad-ass bands this planet has to offer, and we won’t care if they get featured on mainstream radio. Dunkelheit has a similar vision for metal in the twenty-first century.  Suitably brutal, suitably heavy, bands that play in shitty clubs located in the worst basement dives this side of Eastern Europe’s derelict industrial parks need representation desperately. Somewhere in a derelict manse you’ve occupied out of homelessness, you’ve erected a charnel house where you can listen to music.  This band qualifies as suitable ritual worship in said charnel house. I recommend Abominable Premonition. Get your grave robbing tools and light your phallic candles for a night’s worth of ceremonial plundering.  Get a job at a mortuary and get some decent home audio equipment so you can enjoy this desecration of the eardrums.

This band has two members, one of them the great Satanic Death Vulva from the band Goatblood, he of the basso profound vocals and slaughterhouse-sounding churning guitar work.  The other band member is Tar Morion, whose drumming contributions won’t slay Dave Lombardo aficionados, but does a great job steadying the pace on a death doom album that has no room for drumming gymnastics. This is their first demo and is available for download as well as cassette, so stream here and support the band regardless of format. Collect the most filth-ridden death metal on the planet. Start with this one.