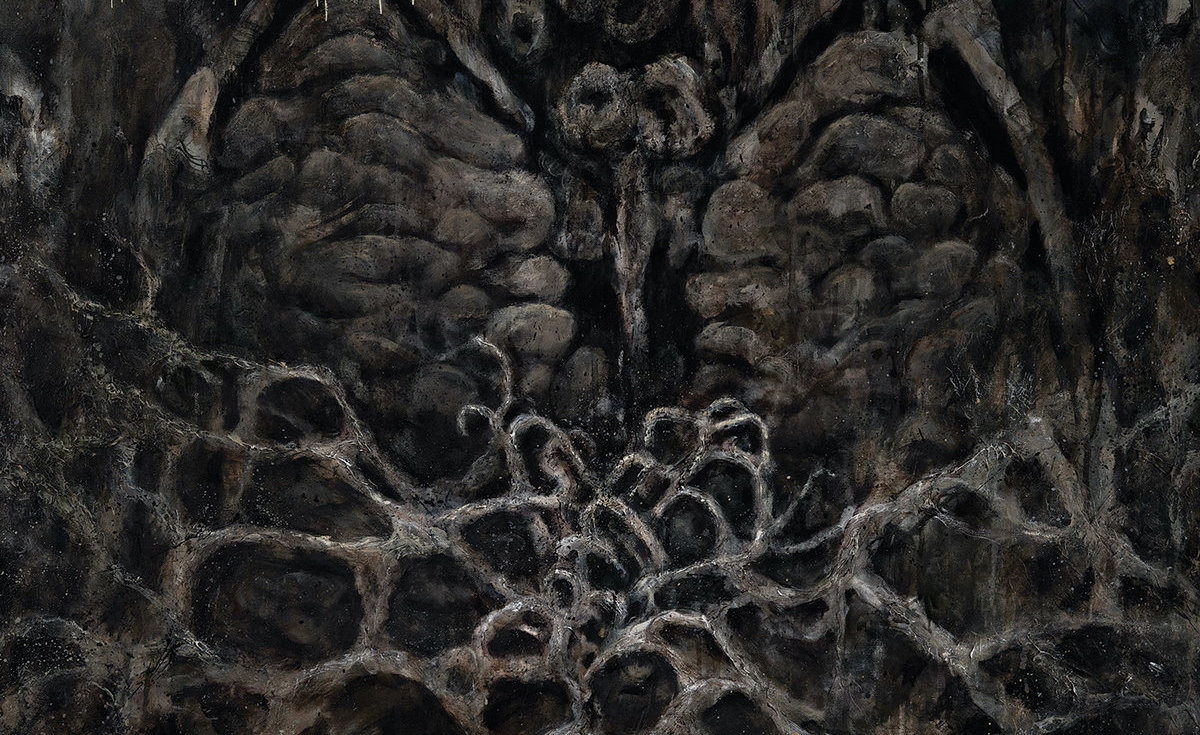 Death Doom is one of those subgenres that has a lot of wiggle room as far as style and execution. You can go all dungeony and gothic or you can get technical and urban, or anything between. Newcomer Apparition goes somewhere in the middle with their debut release, Feel. This album is big, and by that I mean it sounds colossal. You’ve got grinding, grit, and grease, but there’s also a musicality to it that sort of wafts below the initial layer of brutality. This thing relies on repeated listens to get into the focused depths of what the band is trying to do. This isn’t just a trip down a road towards a vicious, slow-motion beatdown, it’s a journey fraught with anxiety and fear, in addition to the violence that welcomes you to the party.

“Unequilibrium” opens the proceedings with a tight, angry drum roll and then we’re off into a world of blastbeats and oppressive darkness. This is fairly typical Death Doom, done with expert tightness and atmosphere. It’s beyond competent and sounds like a band that’s been doing this for a decade already. Rumbling, heavy, and I mean heavy, it finds that fine line between lurching Doom and Death Metal speed and sits in that glorious pocket for the entire ride.

“Drowning in the Stream of Consciousness” finds the band keeping the Death Doom faith, but this time they jab you in the eye with some great melodic touches, accenting what they’ve already shown they do so well with some tasty licks. It’s just as heavy as the first track but this expansion of the sound benefits the band and the song, allowing it more breathing room and a chance for the listener to really dig into what they’re doing here. I don’t care how brutal you like it, when they lace those moments with melody, it can’t help but catch your ear. It’s like biting into a donut and finding out it’s got a cream-filled center, a delightful surprise. Then everything comes to a halt about three and a half minutes in and this rumbling happens, sort of like an earthquake, and the song takes a dirgy, almost tribal turn. Nice touch and nice redirection.

Don’t worry, true believers of Death Doom, but the tortured, slow as gristle melting in the sunlight song come next. “Nonlocality” is akin to having your face scraped across jagged concrete in slow motion before things speed up and you’re dragged fast along that same strip of road. This is a song of shifting gears, start sloooow, go fast, then find that pocket groove that will have every listener banging their head. This is the sign of a band that knows what they’re doing, able to spin you around, kiss your bruised face, then dance with you before pummeling you all over again. Maybe my favorite track on a great record.

We’re past halfway now, and “Perpetually Altered” returns us to a simple fistfight, crunching riffs, blasting drums, doing that slow gallop into a valley of melody, and then smack dab into a wall of Doom. All within the space of its opening minute. There are bits of slow-motion Thrash going on here and there, the riffs occasionally chugging like it’s the 80s all over again. Once more, the band accent what is normal and acceptable in Death Doom with their own, personalized flourishes, and it works to a deep degree. A prime example of this is at the four-minute mark, where things get twisting and bright and then the ground drops beneath you and you’re in a freefall of riffs and free-floating anxiety before they expertly turn back to the main theme of the song.

“Entanglement” is a gem of dread, those jangling notes at the beginning setting quite a mood for what is to come. Jazzy drumming underpins that mood, like a creeping killer with a nervous tic. We soon slide into some fine, crushing groove, and even a (can you believe it?) honest-to-Satan guitar solo. A tidal wave of epic, this song evokes many moods, the most prevalent of which is the overwhelming sense of being smothered. The outro drips of urban blight and dank, black alleys full of suffering and pain.

Album title track “Feel” closes the proceedings, crawling into the room, a slouching beast with blunted teeth and a heartful of murder. It heaves and builds, those escalating riffs bringing the pace up a bit, sort of like a drunkard trying to navigate an obstacle course, stumbling one minute, running the next, always careening on the edge of being out of control. This song isn’t some sort of jagged bent, however. It flows together very nicely.

Lurching out of Los Angeles, Apparition has created quite a debut record. Any fan of Death Doom is almost guaranteed to love it right out of the gates. But here’s the thing: more spins bring greater depths and deeper highlights. Big, brutal, epic, staggering. These are good descriptors of what you’re going to get here, but when you dig a little deeper, you’ll also find a blackened, bleeding heart.

In this article:apparition, death doom, Featured