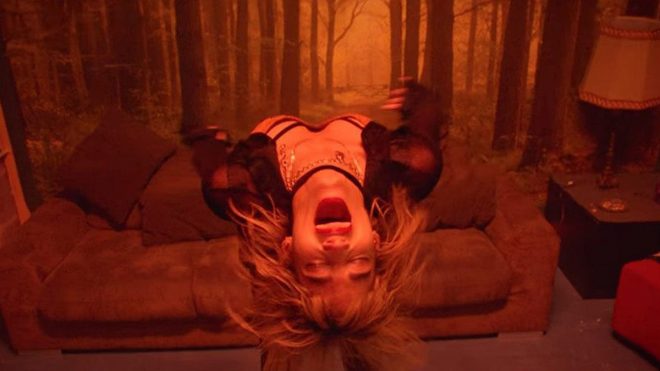 Noe’s body of work speaks for itself. It also sets the bar pretty high considering the beautiful yet confrontational nature of “I Stand Alone,” “Irreversible,” “Into the Void” and “Love.” His latest film combines the intense sexual tone of “Love” with the drugs gone wrong theme of “Into the Void.” Having made videos for both Nick Cave and Placebo, his filmmaking has a pulse. Noe making what early marketing suggested was a horror movie about dance seemed reasonable. At first it is about dance. A French dance troupe in the midst of rehearsals to go compete in America. The dialogue is in French with English subtitles. I hoped that this would not be another thinly veiled tribute to “Suspira” – it was not. Electronic music fuels fire burning through this film. Aphex Twin, Daft Punk, Soft Cell and one hit wonders MARRS.

Unnerving and horrifying things happen. None of which really makes this movie horror. Nightmarish at times, but it is all in snapshots of a chemical train wreck not unlike “Requiem For A Dream,” where it’s more of a cautionary tale. When the going gets weird, Noe shines at capturing the claustrophobic feeling inside the head of someone on an acid trip gone wrong. He does this with none of the Terry Gilliam special effects. It’s all in the camera angles. They work well with the raw contortions of the rubber limb dancers. The relentless thump of the music is more violent than the bulk of what happens on the screen. Noe himself said he wanted to make a catastrophe movie, but rather than an earthquake or a ship sinking, it’s someone spiking the sangria.

Armed with all the sexual explosiveness you might expect from virile young dancers, it’s the complexities of this tension that first foreshadows how things could go wrong. The sole actor with any mainstream clout is Algerian actress Sofia Boutella, who has a dance background. The rest of the cast are dancers that Noe found from attending krump dance shows. Going into the film I did not know this was the case and looking back with the knowledge that most of their performances were improvised, it makes me want to go back and rewatch the film with this in mind with a renewed appreciation for it. While it’s not hard to imagine the first half of the movie that leads into their post-rehearsal celebration as being off the cuff, it is when it descends into the acid drenched madness that is more impressive.

Having done more than my fair share of LSD over the years, I think the collective bad trip is not totally off base, so it doesn’t come across like “Reefer Madness.” It seems what is being conveyed was the acid brought out the ugliness already under the surface. If characters were misogynists or racists then the drugs took away the filter so those things came to the forefront. The end was result created something more in common with the painting “the Garden of Earthly Delights” than say “I Stand Alone.”

Despite winning a few awards in last years festival circuit, Noe is not trying to pander to a preconceived audience. When people walked out of the showing I went to, there was a great deal of confusion as to how they were supposed to feel. Gaspar is not trying to win over any new fans. I think how Noe succeeds in upholding his legacy is in how, like his other films, he uses lighting to match the acting in order to bring out the underbelly of sleaze that makes you want to take a shower after wallowing in it for an hour and a half. If you are already a fan of his work, you know what to expect and this is fully delivered. In a world of tired remakes and mindless fodder like the “Fast and Furious” franchise, this is a welcome excursion into the darker side of man’s self-debasement. Just what I went into the theater for.

In this article:dance, Gaspar Noe, LSD