David Eugene Edwards, main man of Wovenhand, made quite an interesting turn with his previous full-length, Refractory Obdurate. Having signed at the time with Deathwish Inc., it felt fitting to produce a slightly heavier, more aggressive album. That is not to say that he left behind his musical roots, but the switch in balance was fairly obvious. Star Treatment, released by Sargent House, now follows the excellent Refractory Obdurate and in a sense it furthers the path that album set upon.

It has been a key element of Wovenhand from the very start to merge different musical styles and attitudes under the guise of alternative rock. The prime force of Star Treatment remains the neo-folk perspective of Edwards, taking on elements of country and blues, but also Native American musical tradition, gospel and bluegrass. The inventiveness of Edwards helps this aspect, as this melting pot is enhanced with additional instrumentation, crafting a solid scenery where every element fades into each other, producing a coherent result. The addition of drowsy melodies, as in “Swaying Reed,” raise the psychedelic aspect, while the use of effects is spot on, having the appropriate effect each time it is called upon. The punk-ish tone remains in full bloom in Star Treatment, skillfully intertwined with a heavy rock aspect. Through the record the band is able to achieve not just a heavy and aggressive perspective, but also a big overall sound. The groove aids greatly in that aspect, as do the big hooks that tracks such as “The Hired Hand” achieve. It is a fine balance to achieve this balladry, which is properly completed when one takes into account the gothic element that is so nicely inserted within the mix. Attitude and an in-your-face approach is paired with a more graphic and ethereal manifestation, leading to moments when it is difficult not to detect a touch of Fields of the Nephilim, as in “All Your Waves.”

With Star Treatment, Edwards becomes inspired by the concept of astrolatry, and humanity’s interest in the sky and stars, something he spend time researching in literature. It actually comes across very nicely in the album, and it also gives a certain celestial perspective to the music. Through the years, Edwards has been expressing his interest in religion, an attempt that granted a very unique quality to Wovenhand’s music. It seems that this musical odyssey, that started in 2001, has transformed Edwards into a shaman demigod of a sort, a man that has acquired his wisdom through experience and introspection, and shares it with his audience, with Star Treatment marking a high point in this journey. 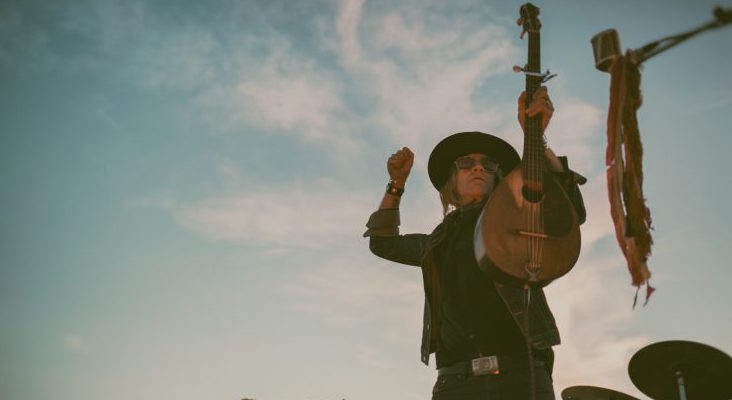 Photographer: Bobby Cochran Based in: Bay Area Site: bobbycochranphoto.com  Advertisement. Scroll to continue reading. ONE: Wovenhand   I’d only been using a camera for...

Photos: Marco Zanin Shellac, the American post-hardcore band from Chicago, is on tour around Europe. I talked with Steve Albini, musician and producer, about...