We are going to delve into the weird world of conspiracy theories. Conspiracy theories tend to obsess over some of my favorite topics: the occult, paranormal, secret societies, aliens/UFOS, unsolved crimes, and other corners of darkness—but most of all, they ask us to question everything. When we stop asking Who, What, When, Where, and Why, we become blissfully detached from the world around us at a great cost.

Conspiracy theorists get a bad rap these days. What if someone asked those questions of the King James Bible in 1611 after the “47 scholars and translators” took it to the printing press after seven years of work? It might now be filed in the fiction section. By demonizing those who ask questions, what we are saying is: don’t think for yourself.

I’ll circle back around to the Church, as they are entwined with many of my personal favorites: aliens, the Illuminati, and the occult. To open the door on this, our first culprits with equal skeletons to hide and fingers in many of the same pies is the United States government. Before we dig into them, let me say there is going to be no emphasis placed on either political party, since anyone wrestling for power is ripe for corruption. This also brings us to our first theory in this regard, that they are all playing for the same team. One theory refers to them as “opposames,” which is the same cereal in different boxes. We will soon look at one example that supports this theory.

The very fact people who ask questions of our government are painted as tin foil hat-wearing crazies or selfishly malicious brings us to an interesting question. If there is nothing to hide then what is the danger of asking questions? Isn’t that what transparency is about?

People don’t like being questioned for primarily two reasons:

A- They don’t want to admit they don’t have an answer, and perhaps this causes them to question their personal security.

Or B- They have something to hide, and much like the groundskeeper on Scooby-Doo, they would get away with if you kids weren’t sticking your noses into things…zoinks.

Sure, the corruption that comes with money and power can be found wherever humans are positioning themselves for those two things, affecting every country no matter the system in place to some extent. America has a glaring history of questionable circumstances. The Salem Witch Trials, the JFK Assassination, Watergate, 9/11, the War on Drugs, and every troops-on-the-ground war since Vietnam. With this track record, if an organization is going to lie to you once, what’s stopping them from doing it again?

One common narrative today tells us that to not trust the Government is to not trust Science. Considering the science the government has condoned and funded in the past, how can this be a bad thing? In 1932, 600 African American men from the 95% Black city of Tuskegee in Macon County, Alabama, were enlisted into a scientific experiment on syphilis called the “Tuskegee Study of Untreated Syphilis in the Negro Male.” These men weren’t told it was a study of syphilis, but that they were being treated for “bad blood.” This study would go on for 40 years, during which time penicillin was discovered. In 1947, penicillin became known as the most effective treatment for syphilis, but the study participants continued to receive purposefully ineffective medications, resulting in their syphilis infections passing to their wives and children in some cases. The Nuremberg Code was written in 1947, inspired by the horrors of the Nazi experiments, and then in 1962, the World Medical Association published the Declaration of Helsinki, which was also aimed at ending unethical human experimentation in medicine. Meanwhile, in the United States, the government clearly saw itself as exempt from such condemnation, and the Tuskegee Experiment continued on until it was brought to a halt in 1972, with only 74 survivors. This means that while the government was passing anti-discrimination legislation during the Civil Rights movement, it continued its discriminatory and unethical experiments on African American men, women, and children.

This might throw a wrench into any narrative based on the fact that the government only has the well-being and best interest of the people in mind. It also highlights an interesting fact: the Tuskeegee Experiment was federally funded under a wide range of presidencies during its 40-year span. It came into being under Roosevelt and ended under Nixon’s second term. It was condoned by Truman, Eisenhower, Kennedy, Johnson, and Nixon. Instead of admitting fault, party loyalists on both sides of the coin cling to false ideals, much like abused children who always want to see the best in their parents, even when the police come to take them away, or people who stay in abusive relationships, because the devil you know will only bring the pain you have grown accustomed to.

Why aren’t more Americans out in the streets asking more questions? Perhaps it’s due to being conditioned to become addicted to distractions and gluttonous instant gratification. When you are comfortable and addicted to that comfort, you are less likely to ask questions that might lead to having to give that up. This is coupled with politics becoming the new religion, throwing objectivity out the window. The earliest forms of government were more directly tied to religion when Kings and Queens were thought to be gods themselves or chosen by the gods. People haven’t changed much over the years; they just set up more complicated systems of justification.

Much like the myth of the Tower of Babel, or the Ancient Greeks’ notion of “divide and rule,” we are being divided and played against one another. This in turn keeps them distracted from looking behind the curtain to see who the Wizard of Oz really is. Instead, we volunteer to put the horse blinders on. How likely is it that this unhealthy dynamic just happened, and that it wasn’t carefully planned by someone playing the long game? If we close our minds to this possibility, we close our minds to all possibilities and we become intolerant of thought outside the safety of our bubble.

What would the Government gain by not having the interests of its people at heart? To answer this, we have many options. The one most grounded in what we can most easily see in the world around us is how large corporations lose sight of the average worker when it’s time to crunch numbers. To not objectify them and make them just another number to crunch would mean having to think about something besides their bottom line that in turn cuts directly into their wallets. Keeping us convinced that some people produce so others can consume, segmenting us into “target markets” based on our insecurities, and lobbying for more sales and less taxes—all of this we know to be true.

Other theories less grounded in empirical evidence range from an elite bloodline who only cares about those in their inner circle, or deals made with inter-dimensional beings to use the average person’s life force to siphon from for their own power—we can go on forever with this train of thought.

Perhaps all the government has to do is give us enough rope to hang ourselves with by creating a climate ripe for obesity and stress. The distraction is fueled by the mantra of, “This would be a perfect world if we only got our way.” Instead of following the money-fueled campaign promises, we focus on the new puppet that tops the same old hand.

Distraction is the key to even the simplest hustle of street magic. Pay attention to the other hand. Awareness begins with the individual. To think one has all the answers closes the mind to limitless possibilities. Once this is done, we stop asking the questions and thus limit our potential for growth. The other futures where we don’t question authority have already been shown to us by Orwell, Bradbury, and Phillip K. Dick.

Check back for part two, where we dig in and ask questions about aliens, the Illuminati, lizards, flat earth, and the Vatican.

Until then, question everything. 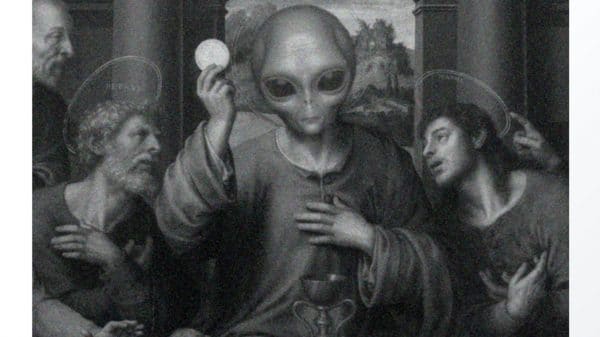