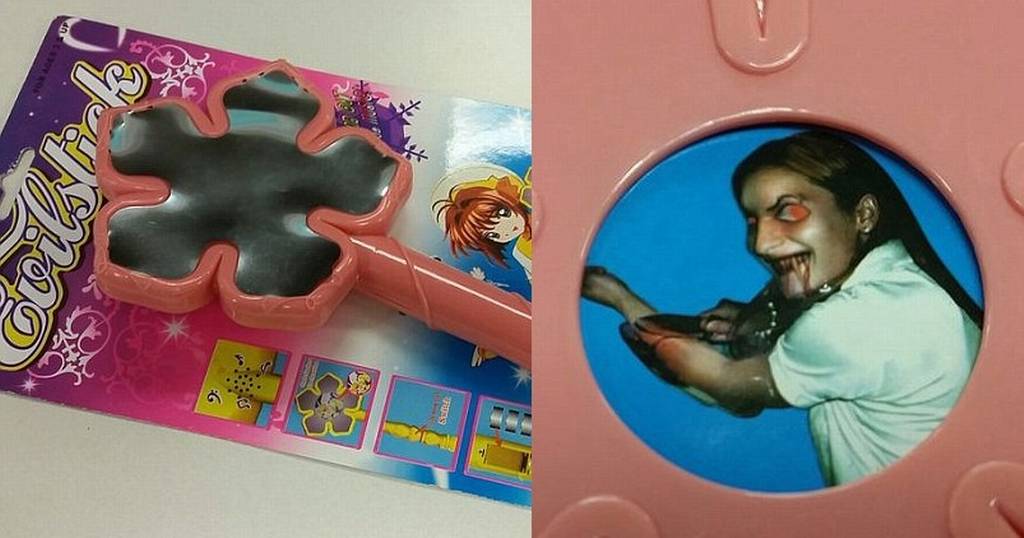 Many of you may have heard about EvilStickGate recently, but due to its relevance to our community, I thought I should share it on CVLT Nation. Evil Stick is a princess/fairy wand probably sold at dollar stores around the US, but definitely at one dollar store in Dayton, Ohio, and it is passing the message of true evil to the unsuspecting children who receive it. On the surface, it is pink and sparkly, with a mirrored flower at one end, but peel back that mirror sticker and what is revealed is an awesome picture of a demon girl slicing into her own flesh with a kitchen knife – and it cackles demonically when you press the button. Who put these on the shelves?? Obama? The store owner is refusing to take them off the shelves, he says if a parent buys a product called “Evil Stick”, they should know what they’re in for.

But really – I think there’s a deeper message here that people are missing. I think what the toy manufacturer is trying to call attention to is how evil the societal pressure of mainstream femininity is for little girls. Encouraging little girls to be pink, pretty, bejeweled and rich “princesses” is evil in my opinion, and it may lead to disillusionment and self-hatred when they’re older. The little girl cutting herself on the Evil Stick is a prime example of what that self-hatred can do when girls realize they aren’t princesses, they aren’t Disney pretty and Monster High skinny and boys aren’t dropping at their feet like they do for Betty and Veronica (just check out #cutter on Instagram…or don’t). I actually argued with a 4 year old girl recently about whether princesses could drive – I was pretending her Sleeping Beauty was a race car driver, and she was appalled because Sleeping Beauty has a chauffeur, not a license.

Wake up you princess-brainwashed parents! You are hurting your little girls. This is the moral of Evil Stick.

Or maybe this is a toy made by Satan and it’s funny as Hell. In this article:Antichrist, evil, Satan, wand