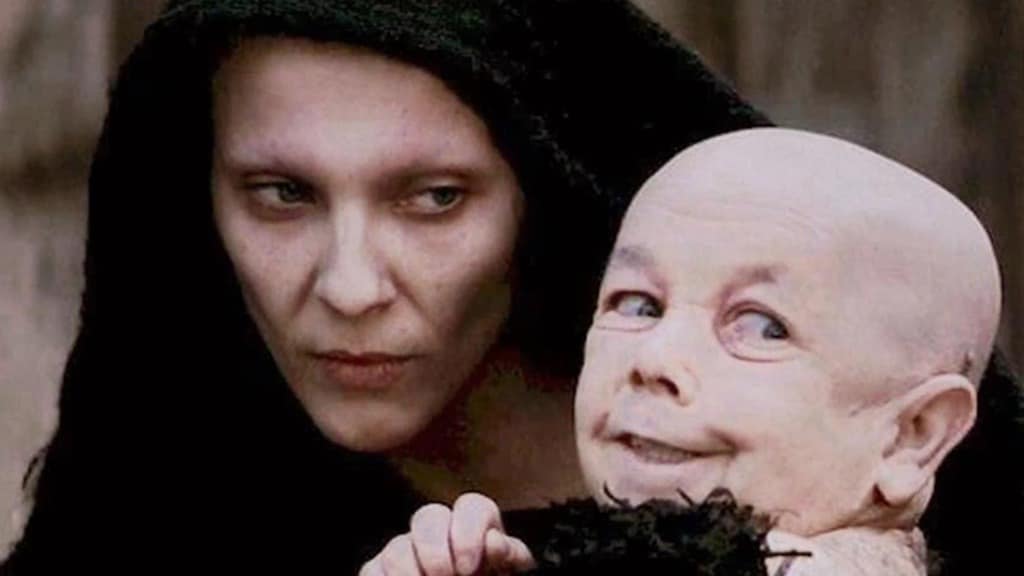 In 2 Corinthians 11:14, the Bible says that “Satan disguises himself as an angel of light.” That’s as far as the Bible goes in actually describing Satan’s physical appearance, as well as those of his demons, who are similarly described as in disguise as “apostles of Christ” and “servants of righteousness.” The artists’ renditions of Satan – encouraged by the Church’s assimilation of pagan deities as “false idols” and pagan traditions as “evil” – make Satan out to be an amalgamation of various gods from the cultures that preceded them and that were being stamped out and slandered by Christianity. To me, Satan and his henchmen sound more like modern-day evangelists, Westboro Baptists, and sex-offending Catholic priests – pretending to be the bastions of good, using their power, privilege, or mind-boggling self-righteousness to use and abuse people who believe in them. Funny what a small percentage of Christians make that rather obvious connection…

Anyway, cinema has played its part in shaping the 20th and 21st centuries’ perception of the greatest evil on earth. Satan has been played in his more traditional, red, and horned supernatural state, as well as in human form, with an all too familiar aura of human evil. Below are six movies that did Satan justice in their portrayal of him (in no particular order):

We like Robert De Niro. We like Lucifer. The two together as one are a perfect marriage of creepy charm and evil. We even did a shirt featuring Louis Cypher.

1987 was a good year for Satan in film. Jack Nicholson is Darrell Van Horn, a weird, hilarious and scary guy who is probably the Devil. Satan’s handmaidens turn against him. And there’s some destruction of patriarchy metaphor in there as well.

Al Pacino as the Devil. If De Niro did it, then you know Pacino had to do it. He’s fucking pissed as only Pacino can be. And Keanu’s emotive ass is in it. It doesn’t get any better!

Viggo Mortensen as a young, hot, mean as fuck Satan. “I can lay you out and fill your mouth with your mother’s feces.” Now that’s fucking evil! Christopher Walken plays Gabriel, and the two get good and gory together. Moral of the story: all angels are evil.

Tim Curry as an almost cartoon-like Satan, but fucking awesome in every way. He’s the Lord Darkness, the fucking Unicorn Slayer. If only he slayed Tom Cruise, this movie would be perfect. Watching this with the kids tonight.