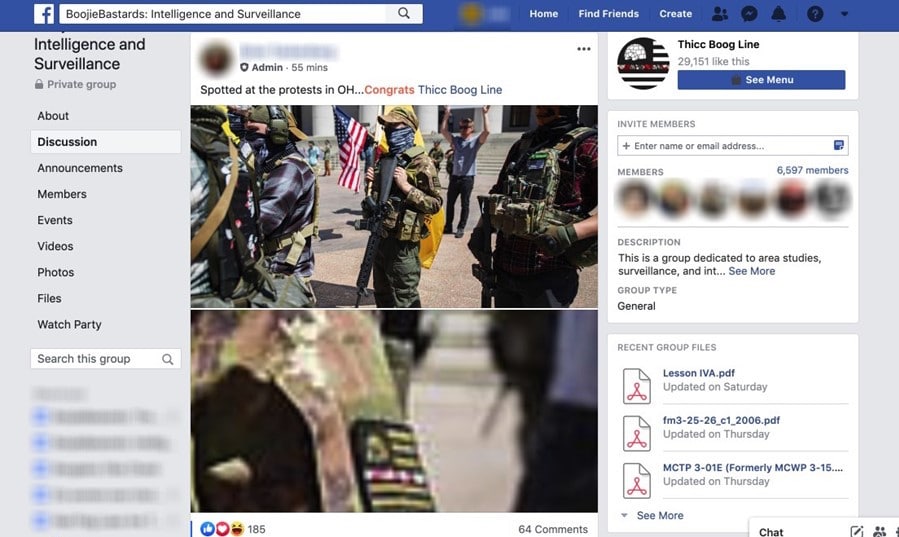 Members of the extremist subculture, carrying guns and wearing Hawaiian shirts, have been arrested for inciting violence during recent protests

As protests against systemic racism and police brutality occupy cities across the US in the wake of the police killing of George Floyd, members of a loose, primarily online, extremist group – the so-called “Boogaloo” movement – have made their presence known, and in some cases have been arrested for their more sinister involvement.

On May 30, three men that self-identified as part of the Boogaloo movement were arrested as a protest took place in Las Vegas, accused of conspiracy, terrorism, and explosives possession for making Molotov cocktails to take to the demonstration, as reported by the Associated Press.

Another 22-year-old man – an emergency medical services worker who’s been linked to the extremist group – was recently arrested and fired for helping to incite a riot during a Columbia, South Carolina protest, according to a local Sheriff’s Department. And yet another person, supposedly linking themselves to the movement, had guns and tactical gear confiscated at a protest towards the end of May.

The actual Boogaloo movement though, remains difficult to pin down. Members – sometimes otherwise known as “Boogaloo bois” or “Boojahideen” – often identify themselves with visible gun ownership and wearing ironic Hawaiian shirts, but their beliefs range from white supremacist accelerationism to a more general (but still extreme) anti-government ideology. Their goals and mission mostly though seem to align with far-right, anti-government groups from the Proud Boys, to the Oath Keepers, Sovereign Citizens, and of course the KKK. What feels most urgent in this time is that the far-right group looks to be hijacking the widespread Black Lives Matter protests to invigorate violence.

The nebulous movement is, concerningly, gaining numbers. As Reuters highlights, a study from the Tech Transparency Project reports that “tens of thousands of people joined boogaloo-related Facebook groups over a 30-day period in March and April as stay-at-home orders took effect across the United States. Project researchers found discussions about tactical strategies, weapons and creating explosives in some boogaloo Facebook groups.” 125 Boogaloo Facebook groups with combined number of 2,000 members were found during the report, with over 60 per cent of the groups made in the three months before the report was published. In these groups, members were found to be discussing weapons, militia tactics, explosives, and combat.

A Network Contagion Institute report affirms the continued growth, as “since November of 2019, mentions of Boogaloo/boog have more than doubled (on Reddit) and show sustained and increasing activity over the COVID-19 period.” Members of the group have also joined protests against coronavirus lockdowns, as well as the recent demonstrations against racism and police brutality, which the US Department of Homeland Security warned they could exploit, after unearthing messages about engaging in violence and triggering “the Boogaloo”.

Megan Squire, a professor of computer science at Elon University, who studies white supremacists and extremists online, told Rolling Stone that it seems to have originated on /k/, a 4chan forum for weapons enthusiasts with notable far-right leanings. The term “Boogaloo” itself, which is a tongue-in-cheek reference to the much-mocked 1984 film Breakin’ 2: Electric Boogaloo, can be used to refer to “the violent collapse of modern society” or as “shorthand for a future civil war”, according to the Anti-Defamation League. These ideas about armed conflict with the government are often linked to the state’s attempts to reform gun laws, which have been the subject of protests joined by Boogaloo movement affiliates in recent months.

As with many other underground, online subcultures that orbit alt-right ideology, the Boogaloo movement is partly so difficult to pin down because it’s shrouded in layers of irony, memes, and distorted language (one workaround to avoid using the term openly online, the phrase “big luau”, explains the origin of the Hawaiian shirts). Cherrypicking rhetoric that is overtly racist and sinister, members can quickly lean on the movement being deeply ironic and a joke.

“While many still use the Boogaloo meme jokingly, an increasing number of people employ the phrase to incite an apocalyptic confrontation with law enforcement and government officials or to provoke ethnic warfare,” a report from the National Contagion Research Institute (NCRI) said earlier this year. The memes circulating on Facebook groups, on Twitter, in subreddits and on 4Chan, are overtly racist and offensive. While IRL it can look on the surface like some are aligning themselves Black Lives Matter activists due to their anti-police sentiment, it’s likely they’re hijacking the protests to stir more violence, and in their view, enact the supposedly incoming second American Civil War.

President Donald Trump has continued to bolster right wing media rhetoric against Antifa, officially labelling the group a terorist organisation and pushing a conspiracy theory that an old man hurt by police in Buffalo protests was a part of the left wing antifacist movement and had actually faked his fall. Trump has continued to paint Antifa as a terrorist group, blaming them for pockets of violence. And yet, no word from Trump on the arrests of the supposed Boogaloo men or the wider movement itself. As the Intercept reports too, a large portion of FBI’s time on domestic terror investigations has focused on individuals and groups that are “Black separatist extremists”, a phenomenon that doesn’t actually exist.

Asgard Is A People, Not A Place: Heathenism and Race, or What Everyone Gets Wrong About Asatru

During the Nazi era, Germanic religion and history were, in short, simply treated like any other propaganda tool, with complete disregard for the actual...

by DARIEN CAVANAUGH via Defiant When alt-right poster boy Richard Spencer’s face ended up on the receiving end of the punch memed around the...