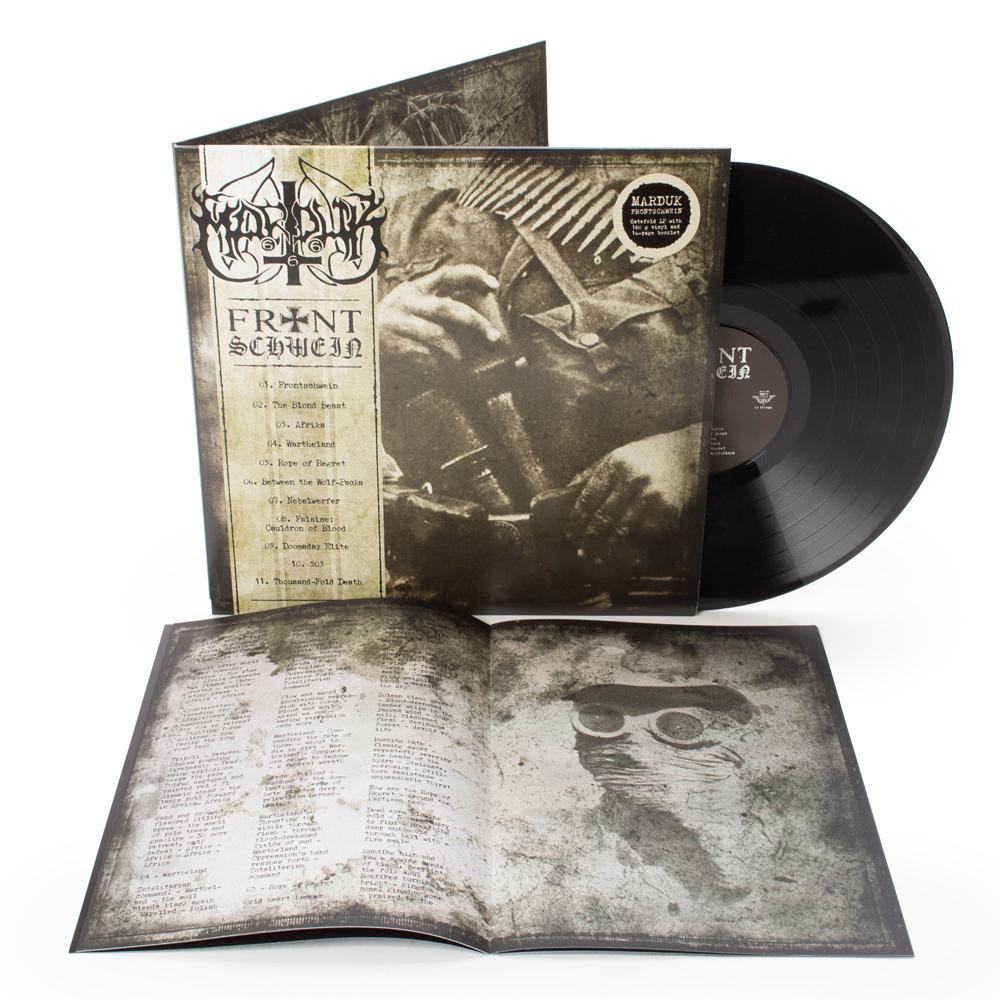 Of all the second wave black metal bands, Marduk feels like the AC/DC or Motörhead of black metal. Like those bands, they are finely tuned masters of the “straight up in your face” approach. Unlike AC/DC or Motörhead, I’m good with Marduk’s entire discography, whereas I tend to cut off the other two bands after the Bon Scott years and Orgasmatron. So it should come as no surprise that on their new album, Frostschwein, Marduk continues to polish their raw and to-the-point style of black metal. In fact, right from the title track which opens the album, they come out blasting. The only changes is it sounds like there is an even creepier dissonance to their chord structure. They stomp on warp speed and don’t slow down until finding the groove of “Wartheland.”

This album features the new drummer, youngster Fredrik Widigs. Widigs fills the throne nicely. In fact, I almost did not notice the change. It is hard to tell if he plays with more precision than past drummers, or if this is the benefit of crisper production. The production might be a point of contention for those who only want the necro sound. It’s 2015, get over it. They matured their appreciation for letting some of the chords throb a while and soak in melody, rather than just chug or tremolo pick a hundred percent of the time. On a song like “Between the Wolf Packs,” this gives it a thrashier feel. They always seem to find their way back to the blast beat, but they wedge them in between some rather hooky riffs. The vocals are more enunciated, making the lyrics almost discernible in the storm that roars around them.

The more militant stiffness that is one of Marduk’s trademarks is put to good use on “Nebelwerfer.” Even in the grim battle march, a smidgen of atmosphere floats in under the radar by way of the guitar melody that the passes through various sections of the song. This melody comes and goes as the song takes on a drone of it’s own. This is not to say Marduk has become Watain. What they do best is very much intact. The blast beat-ridden song that follows is all the proof you will need. They do allow for the occasional gallop to accent what might be seen as a chorus. On the other hand, the moments they do dabble with the tried and true formula, like the doomy trudge of “503,” really pay off for them.

The icy cold that comes with the territory freezes you to the bone. The tension in “Doomsday Elite” is especially chilling. It proves that Marduk can hit the sonic sweet spot black metal captures so well with just as much ice in their veins as any of their countrymen. They close out the album with even more crazed fury than they began it with. The frantic blast of “Thousand Fold Death” rushes past you before you can attempt to figure out what just happened. The vocals are squawked out in a spitfire manner that stays on top of the snare. If you are already a fan, they are not going to disappoint you. If you are just getting into black metal, then this album isn’t a bad introduction.