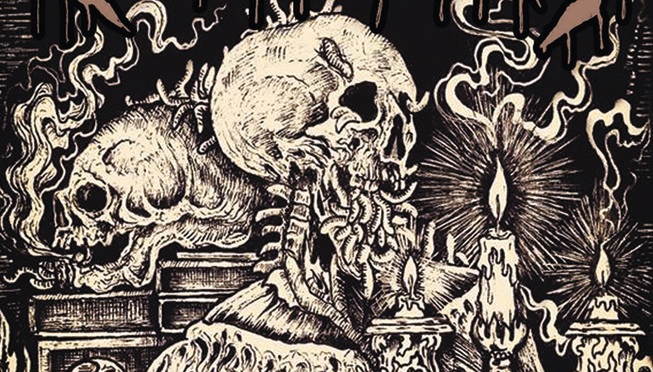 Raw and chaotic black metal never escapes my notice. Svarta are relatively new, having released only a demo in the past, while keeping their identities secret. They’re from Sweden, but play black metal closer to that of French revisionists Peste Noire. Svarta really go nuts on the vocals, and the subtle, clean guitar/acoustic bits are stellar. This could make a run at my end of year list for 2015.

When the band go all-out, they sound like raging fury. The drumming here on Sepultus sounds like it was captured live, and all the better for it. There are brief moments of respite from the mad chaotic blasting and show a depressive side during such slower segments. On track three, Gift, the vocals are far from ordinary harsh whispers. There’s crying, wailing, and the clean guitar accompaniment is majestic.

Sepultus, Svarta’s debut full-length album, is a stunner. Strange riffs can be found up and down the tracklisting. The band use less distortion even on the straight-away black metal sections, the tremolo riffs moving up the fretboard with searing quickness, the speed-picks focusing on shredding notes almost like lead guitar.

When that cascade of notes registers in your awareness, the Peste Noire comparisons sound warranted. On the raging, blasting sections of songs, Svarta sound raw and under-rehearsed, but the effect isn’t quite a derogatory one. The raw sound and performance has a charm here, and the production is the live, one-take type. Let’s just say that Al Necro digs this style.
In fact, the drumming sounds almost sloppy, and you’ll swear the guitarist could’ve used just a little more practice. Not that the band need to rehearse more. The performances on Sepultus make the impression that a concerted attempt was made at being sloppy for the sake of the recording. The vocals are crazy sometimes, wailing like Peste Noire madman Famine does on most of the latter’s albums. Svarta doesn’t cop his style to intolerable limits though. Svarta use death growls on occasion, and the acoustic guitar isn’t quite French folk/pop for the most part. The influence comes across strongly to me, but not quite to suggest Peste Noire as a reference for this music. The lyrics are in Swedish, and there’s no point singing along (wailing along for that matter). There’s even a segment when the vocalist sounds like he’s vomitting, then turns to demented laughter in one, strange but savory moment.

I’d say Sepultus shows Svarta as a very promising band on the verge of greater public awareness. If the band experiment with their sound more and write some catchier riff-work, the sky’s the limit, although I’m not quite certain Svarta will relish the thought of playing mainstream music, and for that matter I hope that they don’t.