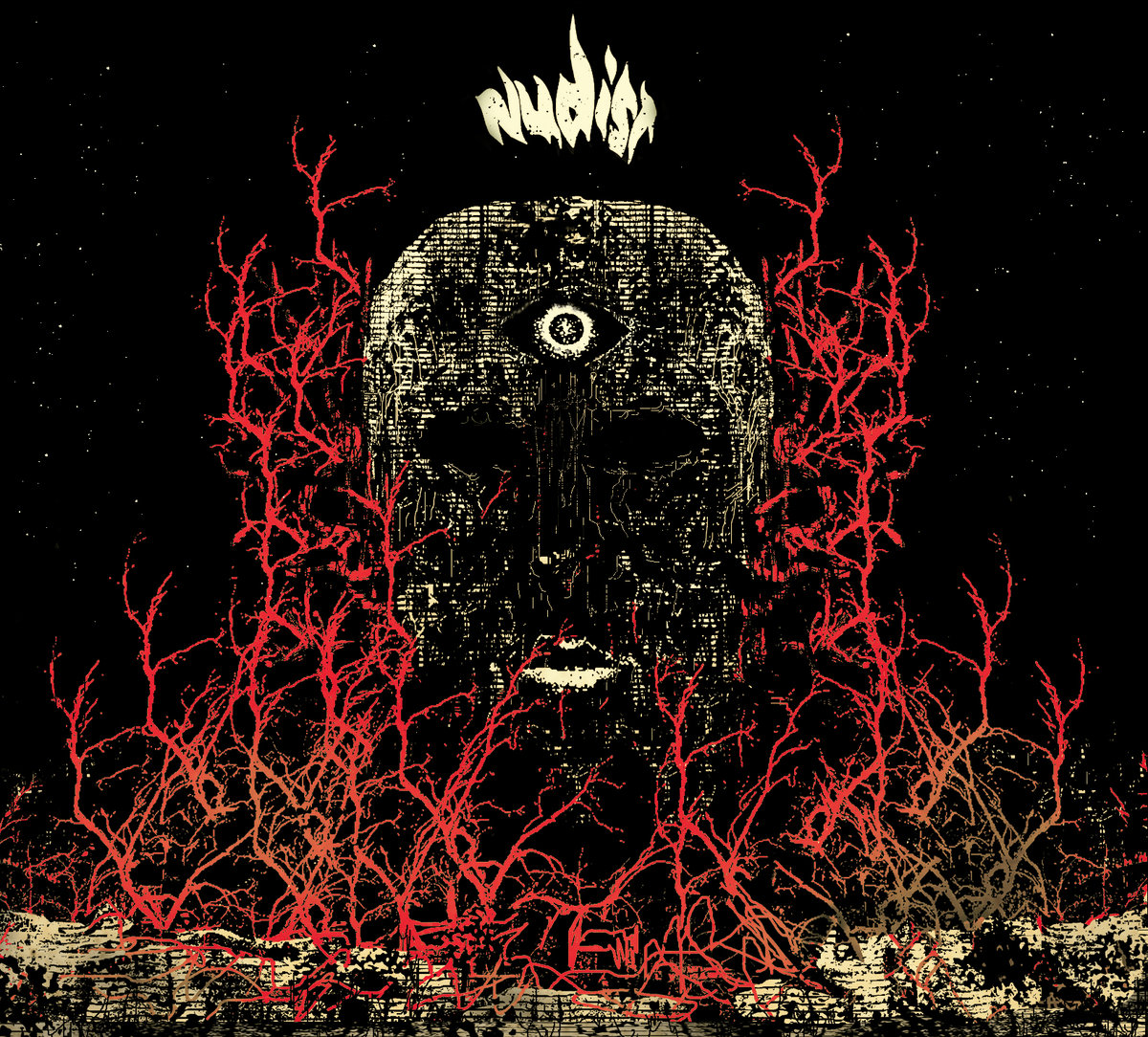 It might be the fear of a new world-order where we might have to call a racist and ignorant shitstick like Donald Trump “Mr. President,” I don’t really know. What I do know is that angry music is as healthy as ever, and just getting angrier. Lots of cool releases keep pouring out from the gutters of underground, a seemingly endless flow of angst and rage channeled by kids from around the world who have just fucking had enough of this world, this bullshit “leading” class, and its life-suffocating nonsense. And overseas shit doesn’t seem to be any different. My brothers and sisters from my homeland of Italy are in the same boat and their angst and desperation is real AF, here are the latest….

“The Capital of Evil,” made by a band whose name translates to “Hate and Shit”… So there you have it, the return of one of Italy’s best and most fucking annihilating sludge metal bands right now. We’d already been blown away by the raw intensity and pachydermic heaviness of their debut, and now the duo comprised of masked henchmen Unnecessary 1 and Unecessary 2 – AKA HATE & MERDA – has returned with another vile and putrid slab of their staple, hate-fueled sludge. “La Capitale del Male” is a raw and unforgiving sludge album that feeds off of a ferocious hardcore assault that never relents, that does not stop until complete ruin has been summoned and unchallenged misery has been unleashed upon the flesh of mankind. As you listen to the duo’s new record, at times you are just left in complete awe to witness the ferocity and utter devastation that this band can summon with their hateful and downtuned riff assault – a true fucking plight in sonic form to pull through that leaves your flesh battered and scared as you struggle to reach the end of it alive. An absolute crowning moment for Italian underground metal. DOLPO are a post-rock/drone/doom band hailing from Reggio Emilia, central Italy. They play weird, mantric, shamanic and coma-like drone metal that just fucking makes you sink within the abyss of your own mind. What makes this band’s music an authentic ordeal to pull through is their repetitive, circular, and progressing erosion on the listeners’ senses – a trance-inducing and slow-cooking coma that slowly takes over and locks you into the most remote corners of your own mind. The Swans-worship here is as apparent as it is unescapable. Repetitive and cyclical patterns of tribal drums and monolithic reverberations just take a hold of your senses and make you slowly plunge into a crevice of madness and despair. Fans of Khanate, Sunn O))), Thisquietarmy, Nadja, Boris and the such will love every second of this band’s brain-stomping compositions. No newbie to CVLT Nation, you may already know about the one man space-worshiping industrial blackened doom metal project PHOBONOID – a project birthed and masterminded solely within the mind and imagination of Lord Phobos, a lone soul haling from the Italian Alps who creates cosmos-obsessed glacial and tormented industrial black metal packed with alienating and hallucinating themes of deep-space nightmares, being lost in the nothingness of space infinity, and of the downfall of man beyond the orbit of planet earth. A meteor shower of drum machines works as the incessant backbone to some of the most blood-freezing and cybernetic sound-sculpture you will ever hear – a place of alienating and life-draining darkness where glacial riffs and hellish soundscapes paint the imaginary demise of man as his planet dies and no other place in space will give him shelter to survive. Somewhere between Author & Punisher, Darkspace, Godflesh, and Blut Aus Nord stands Phobonoid, a truly mind-melting listening experience. 4. CASKET GARDEN – The World Against Itself

The second coming of CASKET GARDEN is just as wretched and botched as the first one. The raw punk/raw black metal/raw noise miscreants return with their staple barrage of absolutely skin-peeling and mind-blowing abrasiveness made of piercing shards of Japanese d-beat, crust, raw black metal, and American caveman hardcore. A punishing bludgeoning that never relents. A place where flesh lays in ruin and and souls rot in torment – the manifestation in sonic form of your worst nightmares and of the most vile human torment. If you are familiar with and or into raw-punk bands like Raw Nerve and Cult Ritual, then this shit will make your day – you will get absolutely sand-blasted by a firestorm of incredibly abrasive, blown out, loud, piercing, scraping, and violent d-beat hardcore. Absolute veterans of the Italian underground hardcore and grind scene HUNGRY LIKE RAKOVITZ return with a new EP that will further cement their reputation as one of the most bloodthirsty and wrecking post-hardcore/screamo/grindcore acts to ever come out of Italy. “The Inevitable Return To Darkness” is an atrocious onslaught of dark, belligerent, and ultra-heavy metallic hardcore that brings together many schools of thought in the realm of hardcore and metal hybridizations, creating something inhumanly aggressive and atrociously heavy that stands somewhere between Cursed, Nasum, Converge, The Secret, Rotten Sound and Dead in the Dirt. An unrelenting onslaught of pissed off metallic hardcore filtered through the nightmarish visions of the most enraged grindcore aesthetics. 6. NUDIST – See the Light Beyond the Spiral

Do you miss bands like Breach, Knut, Ken Mode, Craw early Isis etc.? That mammoth and bludgeoning sludge riffing thrown against an unrelenting wall of bleak and blinding hardcore rage? Then NUDIST is the band for you. This band plays a massive form of slow and bulldozing sludge broken up by neck-snapping incursions of furious and savage hardcore punk. While some parts are reminiscent of the slow and pounding tread of Godflesh, in other moments the band gets eerie and vast in a way that brings back to mind bands like Buried Inside, Downfall of Gaia and Rorcal. The cool thing is that Nudist also retain a grandiose old school vibe that is puzzling and hard to pin down but that seems linked to the East Coast post-hardcore/noise rock scene of legends like Helmet, Unsane etc. Highly recommended! “Marnero” is Italian for “the Black Sea,” and “La Malora” translated to “The Plague,” or “The Curse” in Italian dialect. As anticipated this album by the Bologna-based band his highly evocative and not shy of being an authentic work of art. MARNERO have roots that run deep in the Italian hardcore tradition. You will be able to hear clear references to Negazione and Indigesti in their sound – or the distant echoes of melodic hardcore legends like Propagandhi and the Adolescents, but everything gets blurred and transfigured by the band to a whole new level, and transposed to an atmospheric plane where post-rock and sludge leanings slowly take over and morph the band into something completely new, savage and ungraspable. One would be inclined to say that bands like Planes Mistaken for Stars, These Arms are Snakes, Harkonen, and Drive Like Jehu are the main influence here but it’s hard to tell as Marnero’s atmospheric and introspective passages often break up and dissolve the initial post-hardcore interpretations and you soon realize that this is a work that is extremely hard to define. Nevertheless “La Malora” is a vast and introspective album that one can get lost into as it pulls the listener in many different directions in a puzzling and grandiose journey within the many possible manifestations of screamo and post-hardcore.