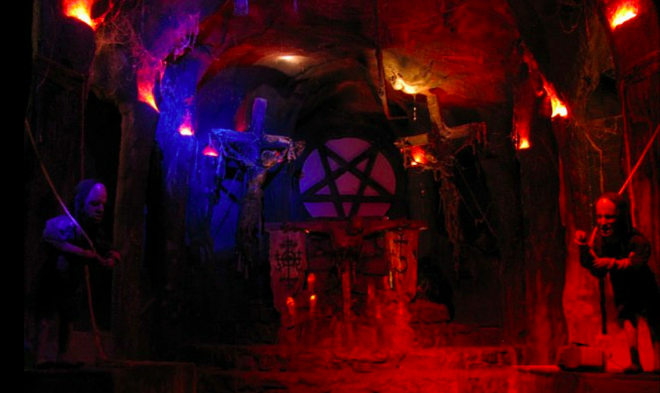 The art forms of metal and horror have been a marriage made in hell ever since Black Sabbath named themselves after the Bela Lugosi film. Both art forms trigger psychological reactions similar an addict’s relationship with their drug of choice. A tolerance is developed and the user must seek out higher doses, or in this case, increased intensity. With metal it’s louder, harder and faster, while fans of horror seek out films that are scarier, gorier and more twisted.

Since Haunted Houses hold a similar consumer demographic to horror movies, they were destined to move in a more gruesome direction to keep pace with their on screen counterparts that often provide the inspiration. Given the connection between horror and metal it’s also not surprising that a movement of extreme haunts was started by a metal head. According to Hollycombe Steam Collections, who collects amusement park rides, the first “Haunted Attraction” dates back to as late as 1915. In the late 1960’s and early 70’s, a civic organization known as the Jaycees began to spread haunts across America to raise money for it’s cause. During the month of October, these have manifested in various forms ranging from mazes, hay-rides, and outdoor trails to even Christian-sponsored “Hell Houses”. But the most popular and the most artfully perfected of these is the indoor haunt. While having state of the art effects is just a matter of money, only a few are willing to go further than their peers to break cultural taboos and sacrifice being a family-friendly money maker for the sake of screams. Here are two that have broken extreme new ground in this field. Sadly, it’s been proclaimed the end is near for the New Orleans haunt the House of Shock. This looks to be the final season for the haunted attraction that was picketed in it’s early days due to the satanic themes, and New Orleans residents even sought to shut it down. At first, you might think a city so steeped in voodoo would be more accepting of the occult elements, until you take into consideration it’s even larger Catholic community. 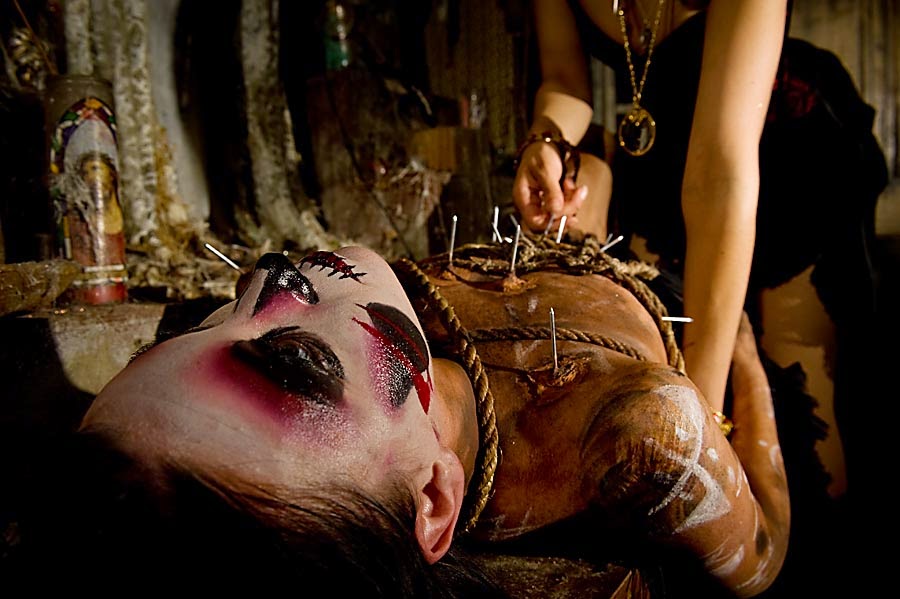 House of Shock derived it’s name from a horror movie host, Morgus the Magnificent. It began in Jay Gracinette’s backyard in 1992 with co-founder Phil Anselmo. The following year, they moved it to the backyard of Jay’s grandmother’s house, until they were told by authorities it would have to be moved to a commercial location. The following year found it at a warehouse on Baronne St, and it became a New Orleans institution ever since. The room dedicated to the Church of Satan first caused the initial controversy. Ross Karpelman, who plays Lord Belial, has upheld the dark tradition over the years by trying to steal the souls of  their patrons every October. 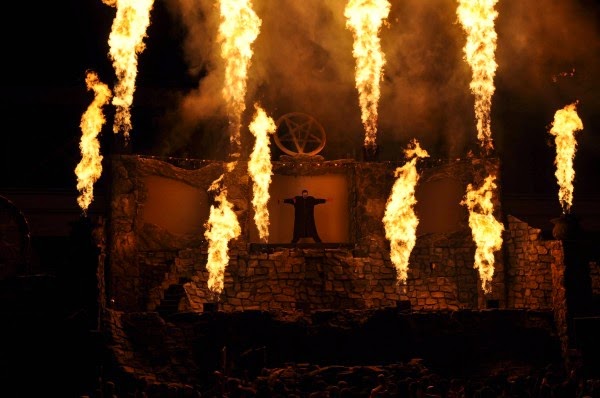 More than just a Haunt, it’s an immersive night of entertainment, with a pyrotechnics show that is boasted by House of Shock as having more fire in it’s first five minutes than Kiss uses in their entire show. They also have metal bands playing afterwards. In the past, such bands as Eyehategod and Crowbar have played House of Shock. This year playing the Haunt are Chicago’s doom legends Trouble, and Goatwhore, who featured the Haunt in it’s video for “Baring teeth for Revolt”. Karpelman has tinted to the strong possibility that the haunt will rise again in some other incarnation. 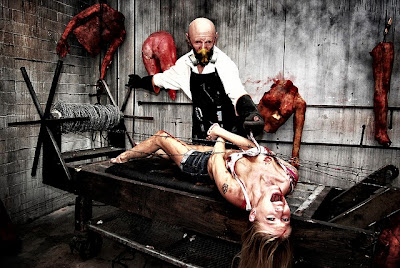 If any haunt is destined to carry the torch for House of Shock, it would be another Southern-based haunt Chambers of Horror in Atlanta, which bears some similarities to House of Shock, though largely takes a different route. Chambers of Horror got it’s start as a more torture porn-themed attraction in the vein of movies like Hostel or Saw. Chambers of Horror sits in a warehouse tucked behind the Masquerade, the three story venue in Atlanta’s old 4th Ward District, which hosts the bulk of the city’s metal shows. In fact, there is a long list of metal bands that have passed through Chambers of Horror, ranging from Gwar to Hank the III. The haunt’s lead character Dr. Splatter, or Dieter Von Splechter, is the mad scientist purveyor of Torture Co. Over the years, this war criminal, whose bloody past dates back to Nazi Germany, has seen various incarnations, some more virile than others, ranging from the Dr. being confined to a wheel chair like Grandpa from Texas Chainsaw Massacre to more mobile version that gets his hands bloody in more feral manner. 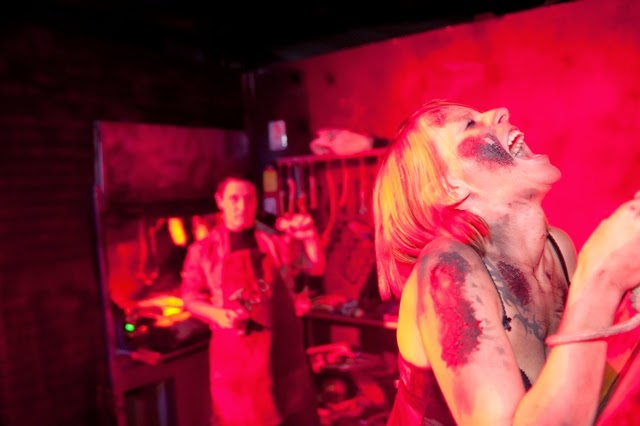 With a storyline that picks up where the previous season left off, the back story of the Hostel-like institution called Torture Co. has now progressed to where a Waco like ATF raid burned the haunt to the ground and it’s perverse inhabitants now occupy that basement. Until the blood bath took a more storyline focused slant, the haunt received criticism for misogynism due to rape-like elements, and despite the non-bias violence featured male on male, girl on girl and every variation in between. In online debates over if the haunt had artistic merit, it was even brought up that even opera has sexual undertones in it’s violence. 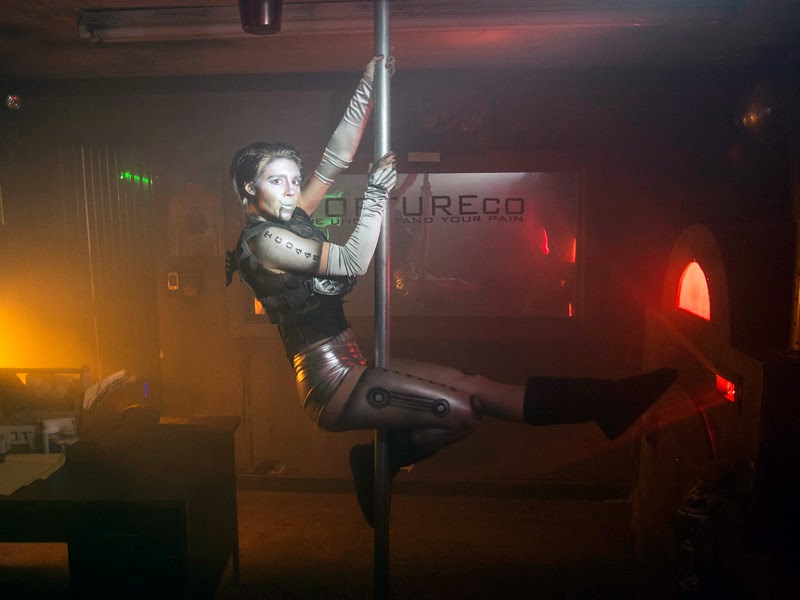 One of the main differences between House of Shock and Chambers of Horror is Chambers often dips into the gore-infused camp, more like a Troma Film, than remaining deadly serious through out the night. This year the haunt has a Robot stripper among it’s inhabitants. In the past, it has featured almost Gwar-like characters such as Laser-Tits and Shark Dick. Overall, the haunt still delivers more scares than laughs, and is known to scare many patrons so badly they beg to be escorted out by security staff. So if you have decided zombies and vampires are kids stuff and you are ready to seek out one of these more extreme haunts this holiday season, you now know where to find them.