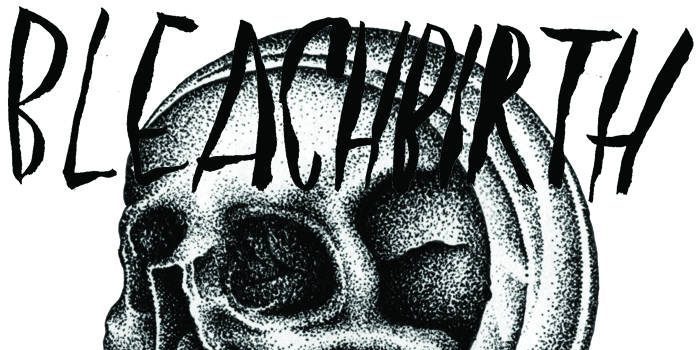 “Children of the Church” is one of the catchiest tracks on the album. Ominous bass starts the song off, then a noisey, screeching guitar tears us right into it. The vocals are slightly less demonic, but still very dark, definitely in a style I’d consider deathrock. The vocals are easier to make out, too. Overall it has a distinct 80s deathrock sound. The song itself could be the band’s anthem (and in fact, this is the track that starts playing by default on Bandcamp).

“Myth of Progress” is another fast paced track, this time starting with the punk style guitar going “in and out of focus” alongside the drums. We are back to the vocals in the style of “Pervasive Disease.” It sounds like a perfect hybrid of deaaethrock and Japanese crust.

“Dissolve” is my personal favorite track on the album. The lyrics explain the metaphor behind “bleach birth”, which is the act of white-washing. When I first Googled “bleach birth” without further context, it was led to a 2009 Urban Dictionary entry which reads, “An ancient Eastern-European tradition of birthing a baby directly into a bath of bleach, much like water-birthing except with a highly concentrated cleansing agent in place of the water. Used primarily to ‘clean the freckles’ from the child, as to maintain its purity. Has been known to cause scarring and permanent blindness.” Don’t worry, that isn’t real, but the idea is there. What I love about this song aside from the lyrics is the psychedelic aspect which doesn’t appear in any other track. It also ends with an echoing effect which expresses the word “dissolve” perfectly.

“Cosmic Null” is by far the most “October” sounding track. It starts with the sound of crows and a guitar melody that would be fitting on The Crow soundtrack. We are back to the clearer, but still deathrock sounding vocals of Children of the Church and Dissolve. Interluding between the vocals lie a dark bass and that first guitar melody, which also feels like a metal ballad. “Natural Satellite” has some space-sounding effects going on as we begin to spiral into experimental territory. The swirling, echoing vocals make you feel like you’re in someone’s nightmare, but it’s pleasant. This is what I’d call deathrock noise you can dance or fade away to.

“Visitor feels” like continuation of “Natural Satellite.” It’s less spacey and atmospheric and back to having a fast noise punk style, but there is a fun effect on the vocals about halfway through that makes it feel space oriented. There’s also a killer guitar solo at the end.

“War Enthusiasm” is the longest track on the album and completely changes in tone. It begins with the sound of an outdoor siren, then a slower guitar plays alongside it. The vocals have a droning monotone feel as though jaded and there are sound clips of guns firing. The guitar on this song is particularly beautiful. This track is completely unlike the rest, but it’s very powerful and pulls you into a different mood, making a journey out of the album.

“Dark Obsession” is another favorite of mine. The guitar it opens with is very catchy, the song itself is very fast paced, and this is the third track where we get to hear those more reverberated demonic vocals, and it combines with the other vocals for a brief moment as well. At this point it’s easy to see the tracks on this album were placed in this order on purpose.

“Mass Lifeform Extinction” starts with a bunch of alien-like noises over that ominous bass for most of the song before the vocals start up. This easily goes with the theme of “Natural Satellite” and “Visitor.”

“Eternally Eluded Life” brings us back down to earth with a very classic dark punk sound you can’t help but dance to. There’s still some spacey sounding noisiness, which feels like remnants of previous tracks. This is another one of my favorite songs because of how relatable the lyrics are

“Brain Death” is very blatantly depressing, opening with the line “Every day is gray / every light is grim.” It’s also one of the slower songs on the album, evoking feelings of emptiness. Anyone who’s experienced depression can relate to this.

“Industrial Prevail” has a very distinctly deathrock flavor to it. Haunting, depressed vocals seem to echo as though in a chamber. Different industrial city sounds ring throughout the track. Overall it has a vibe of uncertainty; and then it ends, just like that.

And we’re left wishing there was more.