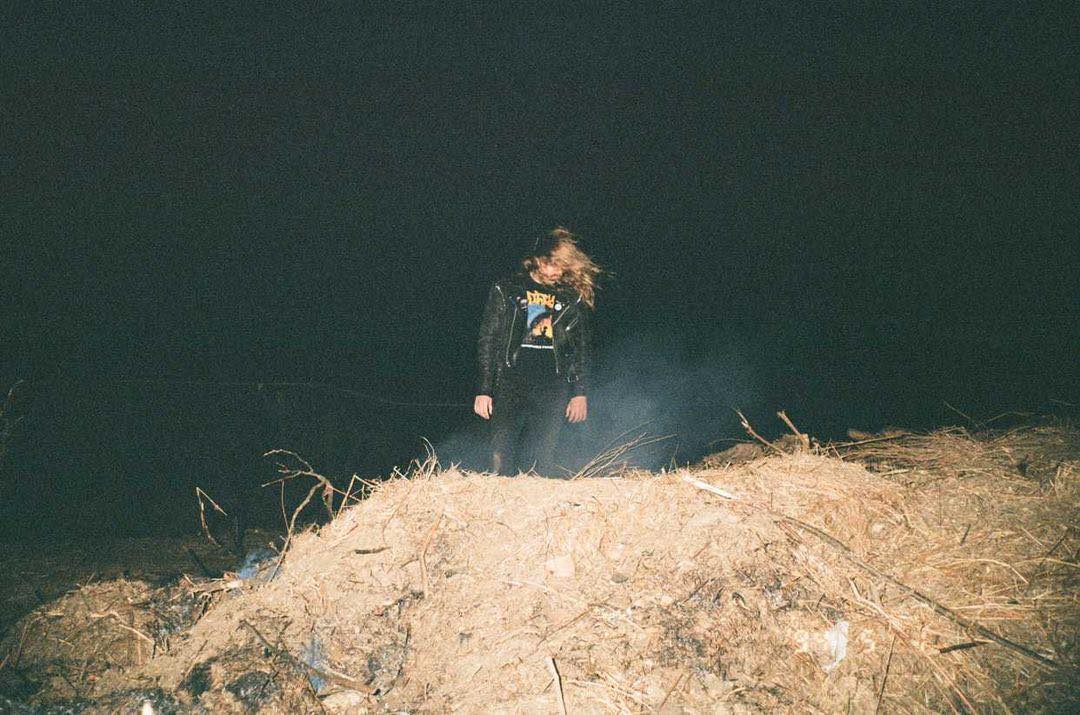 What’s it like living in Texas and also being the best noisecore band in the world?

Texas is like Hell if you have any semblance of a conscience. Liberal pimples rising from the sea of red, 45 death cult people. However, being the best noisecore band in the world has its perks, sometimes people at local haunts recognize me as THEE COMANDER OV THEE INFERNAL LEGIONS and I get discounted pizza or a couple of bucks off the Steely Dan record I’m about to buy at the local record store.

Originally, ILOM was a solo project, but you’ve brought in bandmates. What spurred you to make that leap?

Truth be told, if you had told me three years ago when I started this that I was still doing this band I would be amazed. So around the time I had started this and put out the 69 Song Demo, Die Fort the guy who would run drum programming and other noisemaking ends live approached me and told me “Hey uh your new grind thing is cool, if you ever wanna do it live lmk”. I wound up taking him up on it six months later when I decided that I had an itch to do it live. We played our first set on 4/20/19 with Frozen Soul and Baring Teeth. Thoros or “Uncle Chunge” was added in after our 5th show at the end of 2019 because we thought it would be funny to have two blown the fuck out basses playing at once. His first show with us was early 2020 when we played a battle set with my roommate’s band Two Knights (again something committed because we all thought it would be hilarious).

I’ve heard your sets go over really well with the general public. Care to share some of your favorite comments?

We have never played live for longer than 4 minutes. All three of us have expressed to each other that we think that any amount of time beyond that is fucking stupid. We don’t want that much of us live, why would anyone else? But I guess Dallas Grinders do? More than anything, we’ve gotten complaints from friends that they missed our set for a reason or another (Smoking a cigarette, loading in, taking a leak, making a call to see where a bandmate is), our EP from last year the closing track “Hey, You Missed Our Set” is a riff on this.

If you could fight anyone, who would it be? Who would win?

I will fight any band in Denton, Texas that sounds like American Football or is culled from some branch of the Emo Revival Tree. This excludes Record Setter, we have a truce with them and only them. But I will single-handedly fight any of those bands, and I will win.

I would also prolly fight Gene Simmons, because fuck him, and I would still win.

You currently have 2 new tapes out — a self-released 311 song full length, and an 11 song EP on Estranged Communications. What was the recording process like for each of them?

The 11 song EP, Supplementary Nekro Symphonies Absconded From The Cadaver Of Ildjarn, we attempted our best to encapsulate our 2020, pre-COVID live sound. This was at a time we were still nervous about being in the same room so we live recorded the EP at a public park in Denton. The biggest difference between our live show and this was as opposed to playing bass, I contact miked up a sword and we ran that signal through about 6 or 7 death metal distortion pedals.

The album was a whole different beast altogether. About 40 or so of the songs were recorded in the same manner as the park songs to add some variety, but much of the album was recorded on phones and bounced around google drive between us. Whereas the EP was recorded with “lyrics” and “song titles” added after, the album was built around the 311 different song titles and the music was focused around each individual joke made. Take, “Hanging out in the Alley Behind J&J’s with a bunch of Stupid Fucking Metalheads Listening to Celtic Frost”, which is a song about what would happen during Denton metal shows, a bunch of idiots drinking in a street blasting metal behind a pizza shop. That song began as a joke that would be an over and done with song. Then, I thought a skit of dudes laughing like idiots listening to “Procreation of the Wicked” cracking beers would be funny. My roommate thought it would be funny to add in a “Hey, y’all go on in five” to the beginning, to which Die Fort and I stretched it out more. It mostly boils down to “Hey this is fucking dumb, how can we make it dumber???”

The 311 song full length features a lengthy list of collaborators, including members of Full Of Hell. Would you list them here, just so people know this is serious business?

Who is the worst active band in Texas?

My legal counsel has advised me to not talk shit about [redacted] in this space. I will say this though, whoever you may have thought won the battle set last year (it was us), we can all agree that Upsetting lost that night. Caleb, I’ll be waiting for you after we close on Sunday, when you hear me drop “Walk of Life” on the turntables your ass is mine.