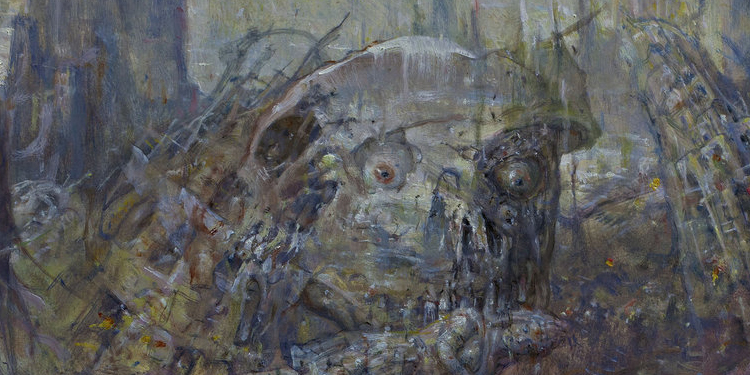 Throwbacks tend to be the “in” thing lately. Nostalgia permeates everything from films releasing sequels to entries released decades ago or to current bands going on tours playing one classic in full. That’s cool and all, but the trick is getting old. Some of those movies don’t do anything new and bands playing their greatest hits don’t always bring the legendary flavor that made those classics what they are. While those bands are focused on looking back with a self-reverent eye, there’s Power Trip, whose gaze is affixed to past and future and with a third eye searing the present like the Death Star’s superlaser. To clarify, their furious crossover manages several monstrous tasks at once, chief among them their crafting of an ethereal sound that tips its hat to the 1980s while also surging forward with youthful freshness. Don’t mistake the use of “youthful” with “inexperienced” as the axe-wielding found on Nightmare Logic has rolled more heads than every season of Game of Thrones combined. Their second album following 2013’s Manifest Decimation’s and their 2016 split with Holy Terrorists Integrity, Nightmare Logic shreds through its eight tracks at a biting pace.

Opener “Soul Sacrifice” touches on all the qualities that have made Power Trip’s live sets the much talked about performance that they’re known for by way of sweeping leads played to a mosh-inducing tempo. It’s a controlled frenzy of a combo and one that this Dallas quintet uses to a masterful degree throughout Nightmare Logic. To wit, this album manages the hybridization trick better than most recent material from genre heavyweights (see D.R.I., sorry) and even at times on par with classics (see Suicidal Tendencies and Cryptic Slaughter). “Firing Squad” is a vigorous bombast that breaks with crisp ease into a chugging break before quickening into a racing solo; qualities that all make it a standout track. The title song is also on par, but crackles with its own electrifying prowess augmented by the vocal’s snarling delivery, which are notably venomous here. “Crucifixation” is every bit as clever as its title as the songwriting allows itself to cut completely loose here, intertwining spacious riffs with brawling chuggery with a painterly hand. Power Trip are at their finest form here, weaving their acrobatic tones into a proverbial circus of nightmares you’re just dying to hear (and wish would just go for just one more act or two, but let’s not be greedy).

Considering the aplomb with which they execute their sound, it’s only natural that Power Trip have garnered the fan base that they have. To clarify, their performance at last year’s Southwest Terror Fest was met with ravenous anticipation, on par with heavyweights like Pig Destroyer and their performance a rightful highlight. Nightmare Logic is that energy given truest form, a throwback that seeks to redefine while revering, all the while giving your headbanging muscles some due exercise.