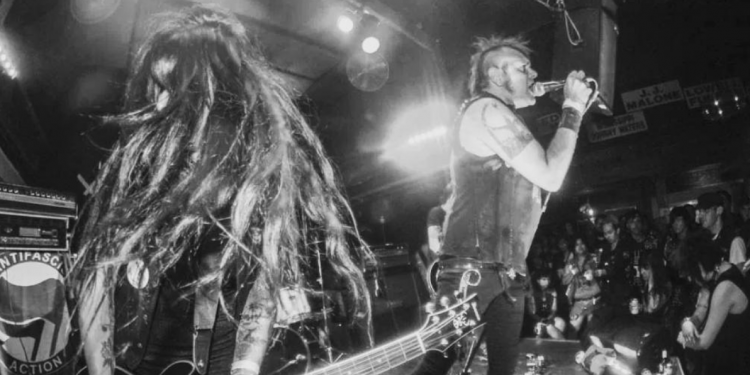 For those of you who have lived under a rock for eight years, Horror Vacui are at the forefront in the bleak ascent of European deathrock and happen to be hitting their stride as we speak.

Today it was announced that their fifth release, New Wave of Fear, is released as a digital album that fans can sample for completely free on their bandcamp before forking over purchase money for the digital album or waiting until Sabotage Records puts out a physical record soon and we couldn’t be more excited. The Bologna, Italy-based band has been cranking out consistently amazing records for years now and have seen several North American tours as a result of their efforts. Now, peaking in skill and talent, they’ve just one-upped themselves yet again. New Wave of Fear contains every element we’ve grown to love about Horror Vacui, but takes on a unforeseen essence and melodic interpretation that grasps the guts and pulls the listener into a macabre dimension where even the ghosts aren’t happy. Familiar chorus-laden distorted guitar leads set the lovelorn grooves we refuse to reject, sometimes flying off into terrifying atmospheres or crashing down from some unseen black cloud of a tempest so unholy, you’ll need to recite ten thousand Hail Mary’s while masturbating with only the purest porcelain crucifix. Vocal wails of a distinct terror vibrate down catacombs from apparitions commanding a panic unique to their classic sound while throbbing drums hold down the angrily danceable rhythms we’ve come to love from the outfit. Nine tracks of aural anguish later, and we just can’t wait until the next corporeal punishment. Horror Vacui takes the blood cake as the definition of deathrock revival in our post-modern context and leaves no cerebral stone unturned as they crusade through dominions we dare not go alone.