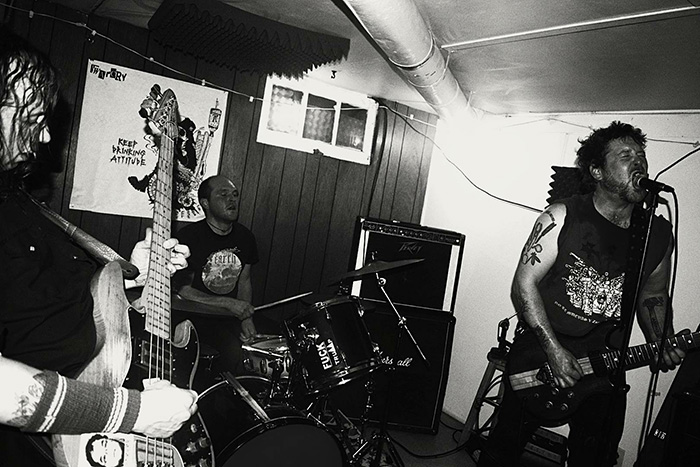 Days are looking bleak in terms of national politics. Right-wing authoritarianism is making an unprecedented clampdown on dissent while white supremacist murders and terrorists attacks have become the new norm. Those on the anti-authoritarian left are getting hospitalized in street brawls with Nazi frat boys and police refuse to let up on the murder of unarmed black men. Every day, a new article is published warning the human race to stop polluting or risk imminent ecocide complete with a slow survival crawl of the poor and marginalized to greener pastures while the rich only want to slaughter them in their path. This isn’t my first intro doubling as an alarmist screed but it’s all true and it very much affects our daily lives and thus the music we create. Portland’s punks Old City realize they don’t exist in vacuum and have an extensive résumé of international travel, connecting with punks and radicals across national borders and continents alike. As veteran’s of grassroots political organizing and music alike, they’re not at want for inspiration or potential and its unquestionable they’ve hit the nail on the head for what they intend to express.

As their second release, ‘Future Dead’ swells up in feedback only to immediately break into crunchy yet melodic riffage reminscent of late 80s era The Wipers. The vocals soon follow suit into a smoky rallying cry, melancholic yet pissed. Just overcoming their norm as a power trio, Sarah Heise from Portland band Visions provides some additional vocal harmonies allowing the mood to climax in a perfectly defeatist enigma. As the EP churns along, the agony of our final days is distinctly captured in a way that only a sun-deprived and soggy Portlander can articulate. The city has been razed to the ground by capitalists and the Alt-Right has decided they need to show up on a monthly basis to pick fights with the public. The cops support them, the mayor does fuck all about it and your rent just got hiked again with no inkling of a raise in sight. You do the only thing you can do – organize, survive and rock the fuck out. Peep ‘Future Dead’ here and stay tuned for more from these vicious punks.