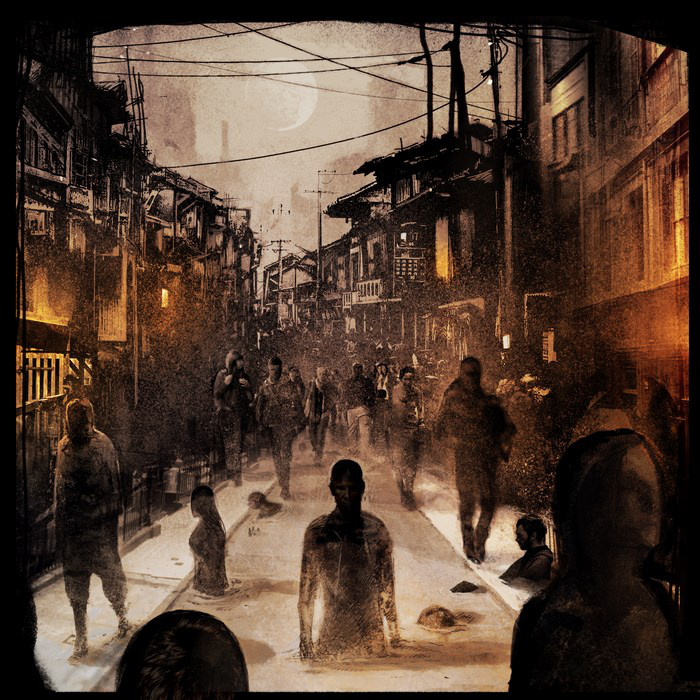 “Nesseria makes me feel like I’m listening to a tone down version of Full of Hell, because I’m so overwhelmed with noises and abrasive guitars, and it just makes me lose my mind”. Four years after their first LP and self-titled album Nesseria is back with Fractures, a frankly interesting piece of work.

A lot of time has passed between those two releases and we just had a split with Clinging to the Trees of a Forest Fire in 2011 to fulfill our desires of violence. Like I said they are now back, and with a new line-up, apparently more suitable to their artistic desires. I’m going to talk a little bit about the lyrics, because it looks like they’ve put a lot of work into it. Indeed each copy of Fractures (and digital downloads) comes with a story on paper, a story that includes the lyrics of the album. So it’s not just a list of song titles and lyrics, it’s really a big story that happened to be cut (and rearrange) in different songs, and if you are afraid you won’t understand them (because they are one of those french bands who cherish writing in french) there is an english version of that story with the package. This kind of writings reminded me a little bit of what Calvaiire did on their last LP, even if it wasn’t a full story. Overall I think the album try to paint an insanely pessimistic (and sadly close to reality) portrait of modern France, and try to remind us that not so long ago we were the nation of enlightenment. You have all your modern flaws and plagues like voyeurism, the culture of misery, common crimes becoming reality shows and such. They also gave us a reinterpretation of the first verse of the french national anthem, for example “Arise children of the fatherland the day of glory has arrived” is turned into “Arise children of the latrine, day of the pigs has arrived” (an so on). Surprisingly you also have very harsh critics of some nameless bands in the hardcore world that create themselves ridiculous universes just to satisfy their ego (they talk about plastic satanism or awkward chattering about the elve’s life for example). On the other hand they also pay a vibrant tribute to Omayra Sanchez, this Colombian girl who died in 1985 after days of agony stuck in water and mud (look her up).
To conclude let’s say they feel a little bit alone amongst all those bands, alone to feel that revolutionary vibe through their veins, and as you know you don’t (or you can’t) create a revolution on your own, even if it is televised. This is not the first time that they’ve used french revolution as a theme because there was a song called “1789” (year of the french revolution) on their split with CTTTOAFF.

The record has been mastered by New Alliance East who mastered an awful lot of other bands, so it sounds pretty good even if it was recorded live (as most of chaotic hardcore bands do) by the same studio that did their other releases, Drudenhaus Studio. I think this is an album that you listen as a whole or you don’t listen to it at all, because you need to acclimate yourself to the environment before you are able to understand it. At first it sounds very heavy, fast and brutal, but along the sessions of listening you begin to hear what’s on the background, the slow melodies that give a sludge feeling to some songs, even though it’s not sludge. I’d say if you like Celeste you will like some songs, if you like Rodeo Idiot Engine you will like some other songs, and so on with Full of Hell or Phantom Carriage.
One thing that I loved in this new LP is that they did two wonderful interlude/outro. Sometimes I feel that bands just do instrumental tracks for the sake of it, without putting too much thought in them, but here they are really well put. “Fractures” makes me feel like I’m in the catacombs and “Omayra” have a kind of Russian Circles vibe. Probably not the best release of Throatruiner this year, but definitely worth checking out.