King Dude’s third LP, Burning Daylight, recently came out on Dais Records, continuing the one man project’s exploration of dark, eerily psychedelic, low-fi, Americana-tinged folk music. King Dude — whose name, as I’ve said before, is a little too close to something like “Kid Rock” for me (but that, as I understand it, is part of the joke) — is considered a neofolk musician by association, but the music especially on this latest LP calls to mind more the sort of modern American country noir of artists like Bonnie Prince Billy, 16 Horsepower, and Haunted George. It’s stripped down, intentionally lo-fi, with a primitive, black, and almost hollow sound; croaking vocals intone about the darker side of religion and rural American life, putting one in the mind of old Appalachian ghost stories.

So, call it neofolk if you want, but as with bands like Bonnie Prince Billy, the music of King Dude’s Burning Daylight really seems to be more a mining of the dark religious underbelly of the south — the “Southern Gothic” aesthetic that has so fascinated artists as diverse as Flannery O’Connor, Nick Cave, Johnny Cash, and others. Burning Daylight’s songs owe as much to Lee Hazlewood as to Of the Wand and the Moon. (And Of the Wand and the Moon owe something to Lee Hazlewood, too, but more on that later.) As Ryan O’Connor wrote on this website last year, King Dude’s music often sounds “like a Smithsonian Folkway recorded at an Appalachian Satanic commune.” That description is still apt for Burning Daylight.

There is something in the American psyche that likes to see a lone man, preferably dressed in black, grasping a guitar and pouring out his troubles to the tune of a lonesome and haunting song. Robert Johnson, Woody Guthrie, the aforementioned Johnny Cash, Lee Hazlewood, and others have all stepped into this American archetype, and it is where one wants to situate TJ Cowgill (the name of King Dude himself) in one’s imagination.

As I mentioned in my review of the 7″ that preceded this LP, “You Can Break My Heart,” it really feels like one should listen to this LP with a tumbler of whiskey on the table. (In fact, full disclosure: I wrote my review of “You Can Break My Heart” while horribly drunk on inexpensive bourbon.) The vocals on Burning Daylight are purposefully croaking, sometimes almost too affectedly so, alternating between the sound of someone who is simply hungover, and something gothier and more akin to Andrew Eldritch’s singing on First and Last and Always. (Or, for the more esoteric, like the vocals on Sixx‘s Sister Devil LP, the deathrock side project of black metal band Von.) There is a gothy tinge to the music, as Cowgill/King Dude himself freely admits. Leonard Cohen’s ghost looms large over the vocal technique employed on several tracks.

The Southern Gothic atmospherics are also intentional. “I was actually inspired by a couple of different movies,” Cowgill recently told Interview magazine about Burning Daylight. “The Night of the Hunter by Charles Laughton —- that inspired a couple songs off the album. A lot of it isn’t directly referential to a book; the record doesn’t come with a reading list. It’s character-based, and it’s fiction.” Burning Daylight is a cinematic LP, it’s true. In addition to the excellently-chosen Night of the Hunter, it reminds me of the whole subgenre of Southern Gothic movies that also includes Wiseblood and documentaries like Searching for the Wrong Eyed Jesus and the genuinely creepy Order of Myths. The songs are evocative of the desolate photography of Walker Evans or the stories of Cormac McCarthy (stories that, it should be noted, also inspired Nick Cave and Current 93/David Tibet to collaborate on All the Pretty Horses).

There is not a single song on Burning Daylight that stands out to me as much as the track “Lucifer’s the Light of the World” from the excellent 2011 Love LP. “Lucifer’s the Light of the World” was and is a masterful synthesis of creepy Southern apocalyptic religious tales, baritone vocals, and ghostly rhythms. There are a few songs on Burning Daylight, however, that are close: “I Know You’re Mine” and “Vision in Black” are two of my favorites on the new LP, and are worth the price of the album. If you’re new to King Dude, start with Love, however, and get Burning Daylight later.

Like Of the Wand and the Moon, which vocalist Kim Larsen started after tours of duty in doom metal bands like Saturnus, King Dude’s origins also ultimately lie in metal (specifically, the black metal band Book of Black Earth). None of those metal origins can be heard in either project now. And like Of the Wand and the Moon, a sort of psych-folk feel has started to creep more recently into King Dude’s music. It awaits to be seen if this psychedelic trend will continue in neofolk music at large, or even with King Dude and Of the Wand and the Moon specifically. (Even Death in June’s The Rule of Thirds was compared to Syd Barrett at points!) And just as Of the Wand and the Moon covered Lee Hazelwood (“Dirtnap Stories”), so it is easy to imagine King Dude settling into that baritone balladeer’s legacy of bittersweet sentiment (and also whom Boyd Rice — another American neofolk figure, it must be remembered — and Death in June have also paid tribute to in the form of their cover of “I’d Rather Be Your Enemy”).

Either way, King Dude and Cult of Youth are putting a distinctly American spin on neofolk, the latter by imparting a palpable punk sensibility to neofolk music, and the former by adding something of the gloomy tradition of Southern balladeers and what is called “Old-time” American music. Burning Daylight is a worthy addition to King Dude’s catalog, a haunting document of gothic Americana that is part dark folk, part noir country, and a great album to settle into the darkening autumn with. 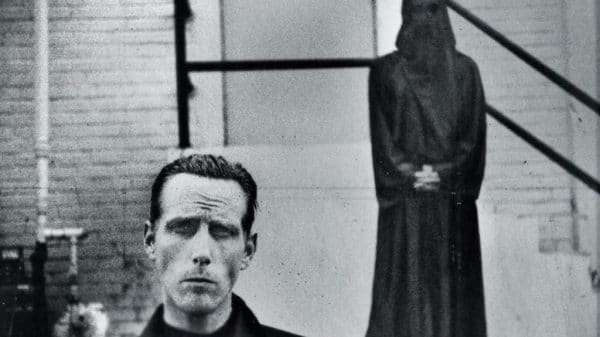 Witness MUNLY & THE LUPERCALIANS Live at Fire in the Mountains 2019

You know there’s magick in the air when you’re witnessing MUNLY & THE LUPERCALIANS playing against the stunning backdrop of FIRE IN THE MOUNTAINS! Their...